The 6 Hours of Shanghai brings the curtain down on OAK Racing’s FIA World Endurance Championship campaign in China this weekend (27/28 October) where the French squad’s LM P1 and LM P2 contenders have two different objectives.

Its Onroak Automotive designed and built #24 Morgan-Nissan 2012 LM P2 has already racked up three WEC class podiums this year and comes into the race off the back of finishing third at the previous round in Fuji, as well as clinching second overall in the ELMS standings at Petit Le Mans last weekend. 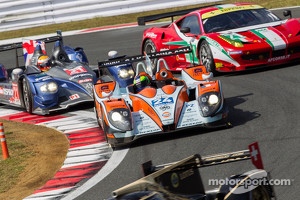 Capping such a strong end to the year with victory in China is now the priority for team owner and silver grade driver Jacques Nicolet, as well as team-mates Matthieu Lahaye and Olivier Pla.

Meanwhile, the team will continue to improve its updated #15 OAK-HPD LM P1 after it returned to the championship in Japan following a three-race absence.

The package of OAK chassis, Honda Performance Development engine and Dunlop tyres – for whom OAK Racing is the exclusive LM P1 development partner – is again piloted by Takuma Sato, Bertrand Baguette and Dominik Kraihamer who will hope to build on the experience accumulated at Fuji by moving closer to the established LM P1 privateers.

Sébastien Philippe, Team Principal: “Shanghai is our last race of the season and, after the mad rush of the last three weeks, we are really hoping to finish on a high note.

We made much progress and learnt a great deal about the OAK-HPD LM P1 in Fuji so should be able to make good use of the data gathered in our fight against the private teams.

On the other side of the garage we have proven the pace of our Morgan 2012 LM P2 on several occasions this year with podiums, pole positions and fastest race laps.

Unfortunately we have not yet fully capitalised on those opportunities. The team really deserves a victory and that’s something we will be doing our best to achieve this weekend.”

Olivier Pla, #24 Morgan-Nissan 2012 LM P2: “Like the majority of teams we have no experience of the Shanghai circuit. It’s quite a traditional layout featuring sections of tight corners and others that are very fast.

We have always been there or thereabouts in terms of performance, and the recent pole position achieved at Petit Le Mans is further proof of it, so in that regard things shouldn’t change.

We just need a little bit more reliability. This is the final race so it’s very important that we finish the season strongly.”

Bertrand Baguette, #15 OAK-HPD LM P1: “Shanghai is a new circuit waiting to be discovered and one that I’ve had to learn virtually.

The first corner in particular is unique and features a big stopping distance and long braking zone, which requires good stability and brake balance.

But there is also a very fast section where we will require both downforce and top-end speed, so finding a good compromise and set-up will be vital.

Ideally we would like to demonstrate that the car and its new package is efficient and able to get closer to the other private LM P1 teams.”

Lotus LMP2 Preview to the 6 Hours of Shanghai