For the driver line-up of Bertrand Baguette-Martin Plowman-Ricardo Gonzalez in the no. 35 Morgan-Nissan LM P2 the aim is clear, namely: clinch the title!

Thanks to its very consistent season the French squad will arrive at the Barhain International Circuit as favourite, but it will have to overcome some very strong teams to emerge victorious. 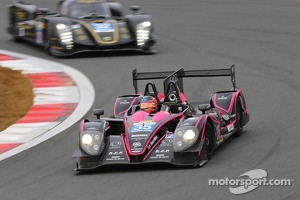 For the driver line-up of Bertrand Baguette-Martin Plowman-Ricardo Gonzalez in the no. 35 Morgan-Nissan LM P2 the aim is clear, namely: clinch the title! After a season marked by their victory in the Le Mans 24 Hours the trio just have to concentrate on scoring the points necessary in the final round to consolidate their position as leaders without taking unnecessary risks.

Hot on their heels since the early part of the season Olivier Pla-Alex Brundle-David Heinemeier Hansson in the no. 24 Morgan-Nissan LM P2 are determined to finish on the topmost step of the podium to end their season on a high note by scoring their first victory in 2013 after four second places.

Jacques Nicolet will again share the no. 45 Morgan-Nissan LM P2 with Keiko Ihara and David Cheng (fourth and second 2013 WEC outings). The trio found their marks in Shanghai and they are out to take advantage of the experience they’ve acquired and shared: their aim is a place in the top 5 in the LM P2 category in the final round of 2013.

OAK Racing is delighted to be back at the beautiful Bahrain circuit for the second year on the trot. The quality of the welcome reserved for the teams and the comfort of the installations are greatly appreciated, and above all the beauty and the technical challenge of the track which, with its three straights one after the other, suits the Morgan LM P2 chassis built by Onroak Automotive down to the ground!

Sébastien Philippe, Team Principal: “We’re now on the home straight and it’s the most important race of the season. We know what we have to do and the whole team is fully concentrated and highly motivated to achieve the objectives. Each car has a specific aim: no. 24 is ready to do everything it takes to win the race; no. 35 has to score the few points lacking to clinch the championship title so the philosophies are very different. In no. 45 David Cheng is back for his second race in the WEC and Keiko Ihara her fourth. They’ve been making steady progress and together with Jacques Nicolet they can aim for a top-five finish.”

Ricardo Gonzalez, Morgan-Nissan LM P2 n°35 : " It's been a great year for us with OAK Racing in the FIA World Endurance Championship and this weekend we have the chance to finish it in a very high note. After a great result in Shanghai, we are one step closer to winning the LM P2 championship , and that will be our main focus in Bahrain . We have been competitive at every track , and we have also shown that we can be fast but at the same time fast and consistent, which is why we have been able to lead in the points. I'm very excited to get on track one last time with my teammates Bertrand Baguette and Martin Plowman and go win the Championship !"

Alex Brundle, Morgan-Nissan LM P2 n°24 : « We are heading into the Bahrain weekend in a good position with both OAK Racing machines situated at the top of the championship order . It is all to play for in this final weekend of the series but I am certain that if we keep our heads down and focus on the race performance we will come away with the desired result . For the #24 specifically there is nothing to lose so we can just push to the absolute maximum for 6 hours and hope that it will be enough . I like it when it’s simple like that , so I’m looking forward to this final race of the series . »

David Cheng, Morgan-Nissan LM P2 n°45 : "I'm really looking forward to returning for another round of the WEC in Bahrain: especially with our OAK Racing team. We've made a lot of made a lot of progress together this year , and to add in this round just before our season Finale of the Asian Le Mans Series in Sepang is all the better to help me prepare for our championship fight . I have to thank Jacques Nicolet for this opportunity and it'll be a pleasure to share our #45 car with him and Keiko again ."

Wolfgang Reips the benefits of the Nismo exchange