OAK Racing clinches another top-3 finish after a thrilling race in Brazil!

OAK Racing put on a gritty performance in the Sao Paulo 6 Hours to clinch another top-3 finish with Bertrand Baguette, Ricardo Gonzalez and Martin Plowman who finished second in the no. 35 Morgan-Nissan LM P2. Jacques Nicolet, Jean-Marc Merlin and Keiko Ihara saw the flag in fifth place in front of Olivier Pla, David Heinemeier Hansson and Alex Brundle who were delayed towards the end of the race by a mechanical problem. 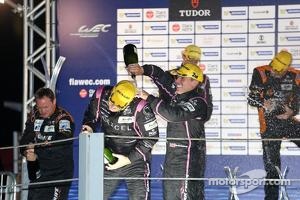 The majority of categories in the fourth round of the World Endurance Championship had an incident-packed race, while in LM P2, there was a no-holds-barred battle from start to finish. In blazing sunshine and high temperatures Bertrand Baguette, Olivier Pla and Jacques Nicolet all made good starts at the wheel of the Morgan-Nissan LM P2s designed and built by Onroak Racing, OAK Racing’s construction department.

In the early stages of the race the three Morgan-Nissans kept to the pre-determined race strategy, until the deployment of the safety car before the end of the first hour’s racing broke the contact between the OAK Racing prototypes and those entered by G-Drive Racing and Pecom Racing.

OAK Racing showed its rapid reaction capacity and decided to adapt its strategy to the new situation. Gonzalez, Heinemeier Hansson and Ihara relayed their team-mates and all put in consistent stints. They, in turn, were relayed by Plowman, Brundle and Merlin. The Morgan-Nissan LM P2s shod with Dunlop tyres made up lost ground, especially after double stints by Plowman and Brundle . Nos. 35 and 24 running in tight formation got back in the battle for places in the top 3 while no. 45 defended its fifth place tooth and nail!

As the final hour approached no. 24 suffered a suspension wishbone ball joint breakage on the left- hand rear which destroyed its hopes of a podium finish. The car rejoined after 14 minutes lost for repairs. It saw the flag in sixth place in LM P2 behind no. 45 so Pla-Brundle-Heinemeier Hansson scored precious points in the championship. Bertrand Baguette fought like a lion for second place right up till the chequered flag. The Belgian reeled off quick laps while saving fuel so he managed to carry out one refueling stop less than his rivals and he brought his no. 35 Morgan-Nissan home in second place, only 40 seconds behind the winner! Baguette, Gonzalez and Plowman followed up their Le Mans 24-Hours victory with another good result consolidating their first place in the FIA LM P2 Drivers’ Endurance Trophy while OAK Racing is still in the lead in the teams’ title chase with no. 35 (95 points) while no. 24 is in third place (81 points).

Sébastien Philippe, Team Principal: “First of all we must congratulate the day’s winners, G-Drive Racing. They had a difficult start to the season but they’ve done a great job this weekend and they really deserve this success. Where we’re concerned we feel very frustrated as the interventions of the safety car handicapped us again like at Spa. The first deployment split the field in LM P2 and that certainly cost us a better result. After that we had to have a perfect race. No. 35 didn’t run into the slightest problem and they were able to save fuel while keeping up a fast pace. No. 24 could have finished in the top 3 were it not for that problem at the end. In no. 45 Jacques Nicolet made a fantastic start to the race setting a searing pace. Keiko Ihara who had her first taste of our car two days ago was perfect and Jean-Marc Merlin is improving race after race. Overall it’s been a positive weekend even if we’re still feeling slightly bitter because of the safety cars.”

Bertrand Baguette, no. 35 Morgan-Nissan LM P2: “The start of the race was spoilt by the safety car, which came out between Nicolas Minassian in second place and me. We lost a lap and we had to push very hard to pull it back. Ricardo Gonzalez did a great job setting very good times. Martin Plowman was consistent during his two stints and I went as fast as I could while saving fuel at the end. We finished forty seconds behind the winner so if the safety car hadn’t got mixed up in things... If you look at our position in the championship it’s been a good day for no. 35, and even though I’m disappointed for no. 24, I hope we’re going to continue in the same vein.”

Keiko Ihara, no. 45 Morgan-Nissan LM P2: “I’m very happy to have finished this race in fifth place scoring points. It’s my best result of the year. I don’t yet feel completely at home in the Morgan-Nissan so it wasn’t all that simple, all the more so as I hadn’t driven for three or four months and it’s a very demanding circuit from a physical point of view. We worked hard to make progress throughout the weekend. I received a fantastic welcome from the whole OAK Racing team and everybody helped me to improve. My thanks to the whole squad. I’m delighted to share this good result with Jacques Nicolet and Jean-Marc Merlin.”

Alex Brundle , no. 24 Morgan-Nissan LM P2: “After a tough qualifying session we were determined to move up the time sheets. Olivier drove a fantastic first stint and I did my best after that. Nos. 35, 49 and us were close together throughout almost the whole race. Unfortunately, our hopes of clinching a good result were dashed by the mechanical problem. Despite this we scored points so we’re still in with a chance in the championship.“