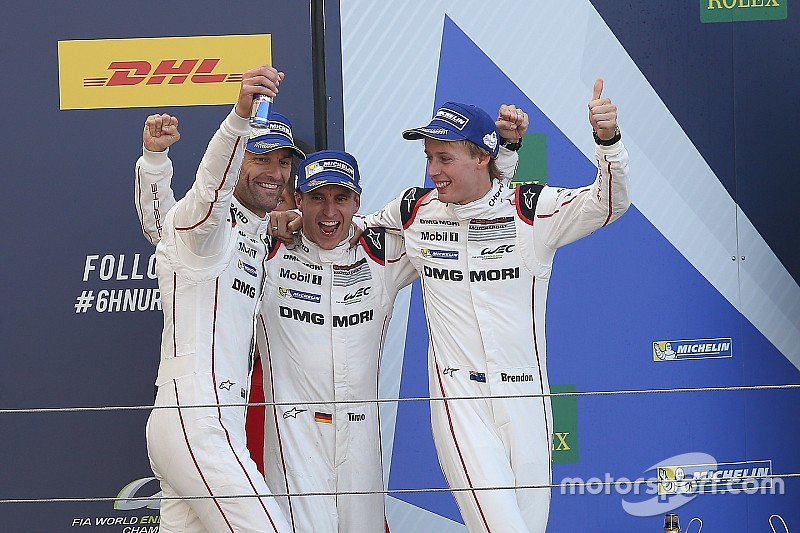 Porsche’s reigning WEC champions Mark Webber, Timo Bernhard and Brendon Hartley overcame a stiff Audi challenge to claim their first win of the season in the 6 Hours of Nurburgring.

It was the first victory for the crew of the #1 Porsche 919 Hybrid since last year’s Shanghai race, as the trio led home the #8 Audi of Lucas di Grassi, Oliver Jarvis and Loic Duval by 53.7 seconds.

The sister #7 R18 e-tron quattro of Andre Lotterer and Marcel Fassler completed the top three, just a further 0.6s back to round off a double podium finish for Audi.

For the majority of the race, sister brands Porsche and Audi appeared evenly matched for pace, but the latter suffered a significant drop-off in pace towards the end of the six-hour slugfest.

The #7 Audi also suffered a delay when it had to change the front bodywork in the fifth hour, although this allowed Lotterer to close down the sister machine before holding station in third.

In the hands of Fassler, the #7 Audi led for much of the first hour before the #1 Porsche took the lead as Bernhard stretched his opening stint two laps longer than the Swiss, who had up to that stage repelled the German’s advances in a tense lead fight.

Taking over from Bernhard, Hartley had a small setback in the #1 with a slow puncture that put the car off-sequence until the second Full Course Yellow of the race, which came in the third hour to allow marshals to clear debris.

The timing of the caution period played straight into the hands into the #2 Porsche crew of Marc Lieb, Romain Dumas and Neel Jani, who pitted during the FCY and rejoined with a cushion of 10 seconds over the #1 car, which stopped under green-flag conditions along with both Audis.

But the points-leading trio fell out of victory contention in an incident with a GTE Porsche towards the end of the penultimate hour, as Lieb earned the #2 crew a drive-through penalty for hitting Khaled Al-Qubaisi in the #88 Proton-run car at Turn 6.

Lieb was able to get the car back to the pits to hand over to Neel Jani, who served the drive-through before sustaining damage during a fierce battle with Lotterer for third.

That resulted in another unscheduled visit to the pits to repair the left-rear bodywork, Jani bringing the points-leading #2 machine home in fourth place, 1m37s down on the winning #1 car.

Toyota ended up a distant fifth and sixth, suffering problems with both cars, but lacking the frontrunning pace of their German rivals.

The #5 TS050 Hybrid of Sebastien Buemi, Anthony Davidson and Kazuki Nakajima was a lapped fifth, three laps ahead of the #6 of Stephane Sarrazin, Mike Conway and Kamui Kobayashi, who lost five minutes with a loose engine part.

Seventh overall was the only one of the three LMP1-L entries to be running at the flag, the #13 Rebellion R-One of Alexandre Imperatori, Matheo Tuscher and Dominik Kraihamer recovering from a brake problem to win the sub-class.

Both of the trio’s competitors, the #12 Rebellion and the #4 ByKolles CLM, succumbed to engine issues.

The LMP2 class was won by the #36 Signature Alpine of Nicolas Lapierre, Gustavo Menezes and Stephane Richelmi, adding to their victories at Spa and Le Mans.

It had been the #26 G-Drive Oreca of Rene Rast, Roman Rusinov and Alex Brundle that dominated until encountering what turned out to be a terminal gearbox problem in the third hour.

That handed the advantage to the #42 Strakka Gibson, which gradually faded from contention when newcomer Lewis Williamson handed over the car to Nick Leventis.

At this stage, the Signatech crew assumed a lead they would maintain to the finish, although the French squad came under pressure from the #43 RGR Sport Ligier of Bruno Senna, Filipe Albuquerque and Ricardo Gonzalez in the latter half of the race.

Manor lost a chance of a potential podium for the #45 car of Matt Howson, Richard Bradley and Roberto Merhi due to a brake disc failure in the final hour.

Gianmaria Bruni and James Calado scored their first GTE Pro win of the year in the #51 AF Corse Ferrari, leading home a one-two finish for the Italian marque as Sam Bird and Davide Rigon brought home the #71 car in second.

Bruni took the lead away from the #95 Aston Martin of Nicki Thiim and Marco Sorenson in the fourth hour, the Danish duo having controlled the race up until that point.

They then suffered the misfortune of a poorly timed caution period that allowed the #71 Ferrari and the #66 Ford to pass, although a late drive-through penalty for the American car driven by Olivier Pla and Stefan Mucke, for a driver loosening his seatbelts too early in a pitstop, ensured that Thiim and Sorenson took third.

The sister #97 Aston Martin of Darren Turner and Richie Stanaway dropped away from the lead fight after having to replace a door in the first hour, while Ford's #67 entry was engulfed by a pit fire as Harry Tincknell attempted to swap over to Andy Priaulx in the second hour.

Aston Martin meanwhile took honours in GTE Am with the #98 machine of Pedro Lamy, Mathias Lauda and Paul Dalla Lana, 25 seconds up on the #78 KCMG Porsche.

UPDATE: The KCMG Porsche was later excluded from the results for a ride height infringement, handing second in the GTE Am class to the #83 AF Corse Ferrari.

Webber: Audi “ran out of bullets” in duel with Porsche