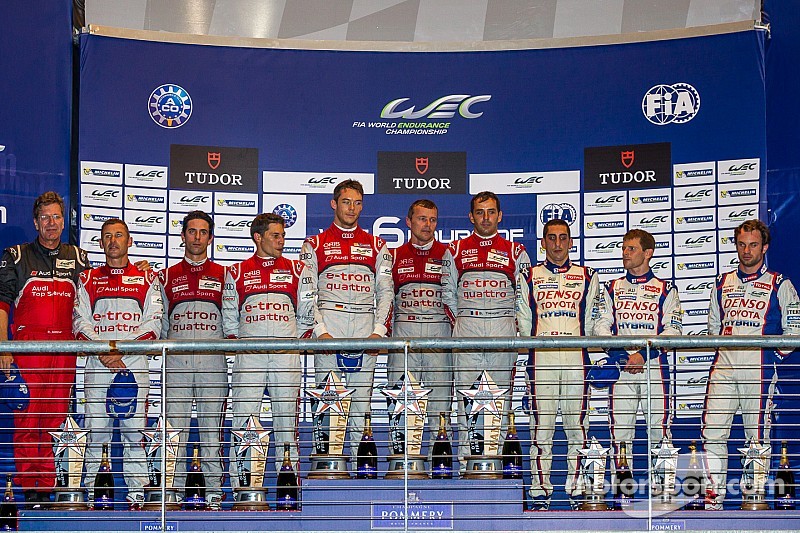 Marcel Fassler, Andre Lotterer and Benoit Treluyer have taken the overall win for Audi at COTA.

The FIA World Endurance Championship made its annual trip to Circuit of the Americas in Austin, Texas, Saturday, and the outcome was not unexpected: Audi R18 e-tron quattros first and second, followed by a Toyota TS 040 Hybrid.

But it was not without controversy. Clouds began to gather about an hour after the 5 p.m. (CT) start, and soon there was a deluge, flooding a field of cars with slick tires. Eventually the red flag flew for a lengthy delay, but not soon enough for some of the competitors.

Waiting so long to stop the race “was a little bit irresponsible,” said Anthony Davidson, driver of the number 8 Toyota, which finished third with co-drivers Nicholas Lapierre and Sebastien Buemi.

Turn 12, where much of the carnage took place, “was a mess” said Andre Lotterer, driver of the winning number 2 Audi, with Marcel Fassler and Benoit Treluyer. “They should have red-flagged it a little bit earlier.”

Otherwise, Lotterer said, it was a solid race for both the drivers and pit crew. “It was really a good team effort for all of us. I think we earned it.”

Second was the number 1 Audi, driven by Lucas Di Grassi, Loic Duval and Tom Kristensen, ending up 53.016 seconds behind the winning team car. Fourth was the number 14 Porsche 919 Hybrid with Romain Dumas, Neel Jani and Marc Lieb, which was leading the race at hour three, four and five. The slim LMP1-L class was won by the Rebellion Toyota of Nicholas Prost, Nick Heidfeld and Mathias Beche.

Oreca-Nissan and Aston Martin have lots to celebrate

In LMP2, the number 47 KCMG Oreca-Nissan was a somewhat surprising winner, with Tsugio Matsuda, Richard Bradley and Matthew Howson driving. Second was the Russian entry, another Oreca-Nissan, of SMP Racing with Kirill Ladygin, Viktor Shaitar and Anton Ladygin driving. And third was the Extreme Speed Honda, the only American entry in the class, with drivers Ed Brown, who also drove in the TUDOR Championship race earlier Saturday, with Ryan Dalziel and Scott Sharp.

Aston-Martin swept the GT classes, with the number 97 Vantage V8 of Darren Turner and Stefan Mucke winning the LMGTE Pro class, over the Team Manthey Porsche 911 RSR of Patrick Pilet and Frederic Makowiecki. The Chevrolet Corvette entry, with Ricky and Jordan Taylor and Tommy Milner was seventh in the seven-car field.

And in LMGTE Am, Paul Dalla Lana, Pedro Lamy and Christoffer Nygaard won in their number 98 Aston Martin Vantage V8, ahead of the number 95 Aston Martin of Kristian Poulsen, David Heinemeir Hansson and Richie Stanaway.

There were 29 entries – nine in LMP1, five in LMP2, seven in GTE Pro and eight in GTE Am. Last year, the TUDOR cars (or Grand-Am, then) ran on Saturday, with the WEC on Sunday, but this year the TUDOR race started at noon, the WEC race at 5 p.m., with a Blue Oyster Cult concert in-between. Add in the thunderstorm and the rain delay, and that’s a long day for fans, many of whom left when the rain fell and did not come back.

COTA’s official crowd count for Friday and Saturday was 50,334, a figure that frankly stunned many in the press room, who were guessing half that many or fewer. The track said that nearly 35,000 attended the two-day race weekend in 2013.

Why the crowd wasn’t better, though, is anyone’s guess: It’s an excellent track, competitors and sponsors said things ran far smoother this year than last year, and the racing was very good all day Saturday. And, by all accounts, Blue Oyster Cult had plenty of cowbell.