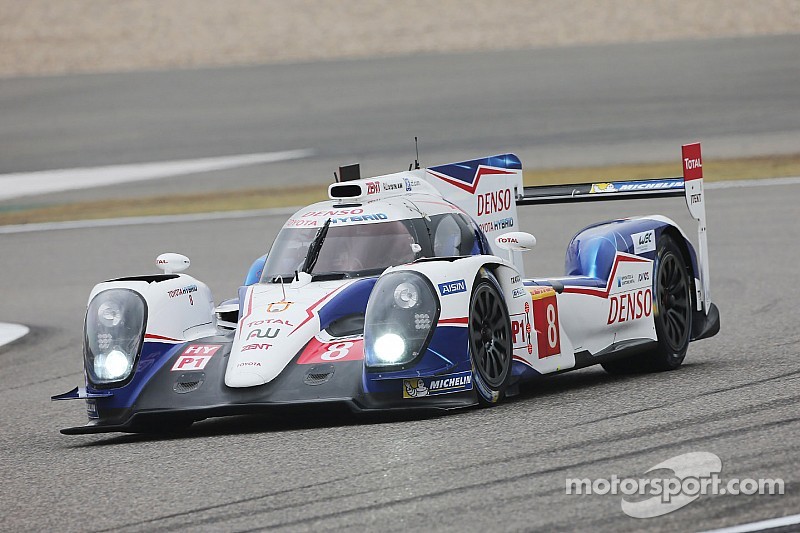 Anthony Davidson and Sébastien Buemi set exactly the same four-lap average as the Porsche #14, but starts second as pole position goes to the car which first set the time.

ToyotaRacing missed out on pole position for the Six Hours of Shanghai by the narrowest of margins in an incredibly tight qualifying session for the sixth round of the FIA World Endurance Championship.

The World Championship-leading #8 TS040 HYBRID of Anthony Davidson and Sébastien Buemi set exactly the same four-lap average as the Porsche #14, but starts second as pole position goes to the car which first set the time.

Alex Wurz and Kazuki Nakajima, in the #7 car they share with Stéphane Sarrazin, will start from the second row of the grid in fourth place, having finished the session just 0.234secs away from pole.

We missed out by a few tenths and now we are fourth so let’s see what the race brings.

Qualifying began with the threat of rain in the air, however despite a few drops, Alex, who has been on pole position in Shanghai for the last two seasons, and Anthony started on slick tyres as the track remained dry.

Both 1,000PS, four-wheel-drive TS040 HYBRID set consistently quick times from the beginning, gradually closing the gap on pole position, and that was to prove the story of the battle for top spot.

When Sébastien took over the #8 it lay third, while Kazuki replaced Alex in the fourth-placed #7. Kazuki completed three timed laps and saw out the final minutes of the session from the pit lane, still in fourth.

But with a point on offer for pole position, Sébastien set about improving the four-lap average - and grid position - for the #8, despite being hindered by the traffic around the 5.451km Shanghai International Circuit.

Qualifying requires two drivers from each car to set a minimum of two flying laps each. The grid is decided by the combined average of each driver’s fastest two laps and when the chequered flag fell, the #8 and #14 had exactly the same average.

That meant pole position was determined by whoever set the average time first, so #8 had to make do with second as Sébastien had improved his average on his final flying lap.

Alex Wurz: “We missed out by a few tenths and now we are fourth so let’s see what the race brings. Six hours is a long race and we expect to be part of a close fight at the front. The track was okay for qualifying despite a little rain just before the start and the car felt okay. We decided to do minimal timed laps each to save the tyres as our focus is on the race.”

Kazuki Nakajima: “It was a pretty good qualifying for us. I think we have made progress on our car in terms of set-up and I was happy with it. We could have gone a bit faster, so that’s a bit of a regret, but let’s do it tomorrow. I think we are competitive for the race and I am looking forward to having a good fight.”

Anthony Davidson: “It’s disappointing to miss out despite doing exactly the same lap time on average but they had a very impressive first lap. It wasn’t our best qualifying of the season but we will learn from it. For some reason I just didn’t have the speed on lap one and I struggled to find the grip so I did an extra lap to improve the average. If you look at it overall, it could have been better for us but well done to Porsche; they deserved it today. It should be a good fight tomorrow.”

Sébastien Buemi: “Of course I am disappointed to lose pole position by such a small margin. It was incredibly tight but Porsche did a good job so congratulations to them. We would have liked the bonus point for pole position but tomorrow is where the big points are awarded so we are fully focused on the race. I think we are in good shape.”