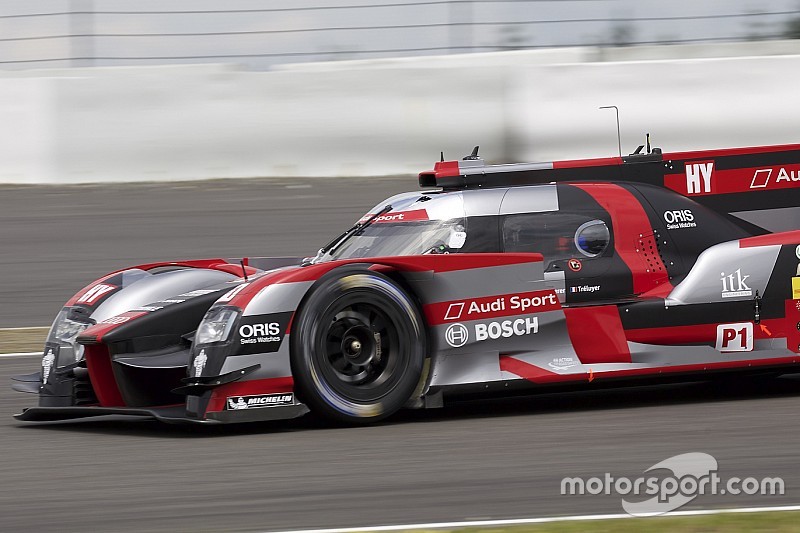 Audi set the pace in the first free practice session for the Six Hours of Mexico round of the FIA World Endurance Championship, pushing Porsche back to third and fourth places.

Andre Lotterer set the fastest time of 1m26.705s around the Autodromo Hermanos Rodriguez in the #7 Audi, a tenth faster than Timo Bernhard managed this morning in the #1 Porsche during the collective test session.

The #8 Audi was 0.194s behind its sister car, with the #1 Porsche again – a quarter of a second off the leading pace this time – outpacing the #2, which was exactly 0.5s slower than the fastest time.

Only one Toyota ran in this session, the #5 of Sebastien Buemi and Kazuki Nakajima – who will drive as a duo this weekend due to Anthony Davidson’s rib injury sustained in testing last month. Buemi lapped 1.1s off the leading pace.

The #6 car is being rebuilt around Toyota’s spare chassis after Stephane Sarrazin’s crash this morning. The team hopes to run in the second session this evening.

Richard Bradley set the pace in LMP2 for Manor in its #44 Oreca, ahead of the #31 ESM Ligier and #26 G-Drive Oreca. However, the Manor machine was sidelined for much of the session with a gearbox problem, and only completed 10 laps.

In GTE Pro, Nicki Thiim set the pace for Aston Martin, ahead of Gianmaria Bruni’s Ferrari – which was fastest this morning. The nature of the high-altitude circuit is certainly suiting the low-drag, normally-aspirated Aston so far.

Adam Carroll topped the GTE Am class in the Gulf Porsche.