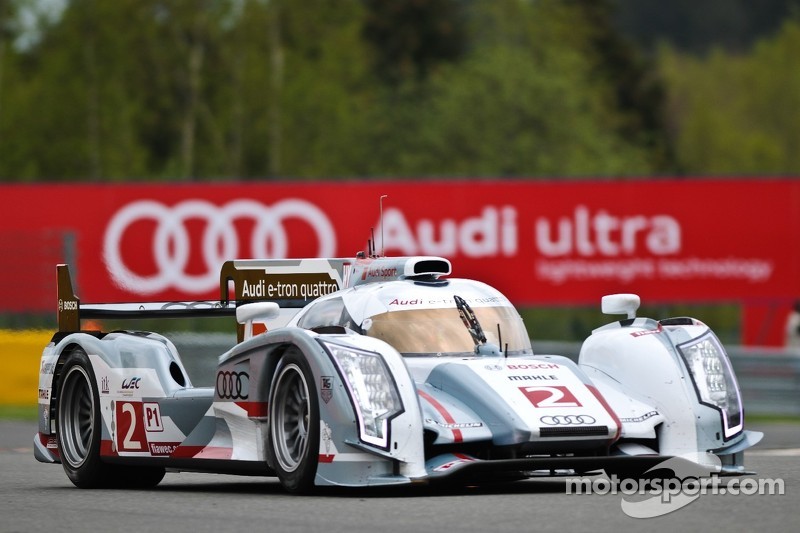 Sebring winner Alan McNish continued the #2 Audi's good run of form in Spa-Francorchamps by securing a debut pole position for the all-new R18 e-tron quattro diesel hybrid car. But with the #4 diesel car of young guns Oliver Jarvis and Marco Bonanomi alongside him on the front row of the grid, the hybrid machine does not have a clear advantage over the improved R18 ultra diesel car just yet.

“I gave the R10 TDI diesel pole on its debut and I'm proud to repeat that with Audi's first hybrid car,” the Scotsman said afterwards. “We set the fastest time after two laps, and that's really when they tyres are at their best – I don't think we could have gone any quicker.”

Audis filled third and fourth spot on the grid, too, with the Le Mans-winning crew of Fassler/Lotterer/Treluyer heading up Romain Dumas, Loic Duval and Audi newcomer Marc Gene in fourth.

As expected, a Rebellion Racing Lola-Toyota was the highest-qualifying petrol runner, in the form of Neel Jani's #12 car. Just two-tenths behind however was Danny Watts in the #21 Strakka Racing HPD. The British team had a slow start the weekend in practice, and didn't run at all in the second session after Nick Leventis crashed the car in first free practice. 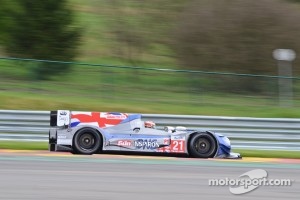 But Watts has now shown the car's speed and it seems the battle for the unofficial petrol win will be a close one. “There's hardly anything between us and Rebellion over a single lap, but over a full stint, it's hard to say,” said Watts afterwards, “and if the rain comes tomorrow as forecast, it's anybody's game.”

JRM Racing struggled with a braking problem in yesterday's practice sessions and are still not quite on the pace of their fellow HPD team Strakka, qualifying over two seconds behind in eighth, just ahead of the Pescarolo Dome S102 of ex-Peugeot men Sebastien Bourdais and Nicolas Minassian. The sole Dunlop-shod entrant in the LMP1 Class; the Moreau/Baguette/Kraihamer OAK Racing Pescarolo-Judd was 10th.

Australian John Martin in the recently formed British team ADR-Delta's Oreca-Judd was something of a surprise polesitter in the second-string prototype class, but with the top six cars in the class separated by six-tenths of a second, no clear frontrunner has emerged so far. Tomorrow's forecast of heavy rain makes it even harder to predict a winner.

James Rossiter qualified the #32 Lotus Lola coupe second, ahead of the sole Zytek car in the field, the British Jota entry, driven in this session by Sam Hancock. Oak Racing put in a more competitive showing in LMP2 than in the top class, with team owner Jacques Nicolet and his co-drivers lining up fourth on the grid, ahead of the second Lotus car and the Pecom Racing Oreca-Nissan.

There are only five full-season WEC entries in the GTE-Pro class, but they're all high quality and, on the surface at least, look closely matched heading into tomorrow's race. French team Luxury Racing scored an important milestone when Fred Makowiecki in their #59 car beat Giancarlo Fisichella in the benchmark AF Corse car to the class pole position in an all-Ferrari 458 battle. 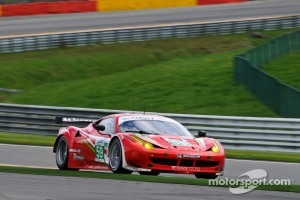 Third place went to the constantly improving factory Aston Martin squad, who backed up their promising Sebring performance by looking every inch the equal of the works-blessed Porsches and Ferraris. “We're definitely much closer to them than we were in Sebring,” said qualifying driver Stefan Mucke, “but we don't really know where we'll be in the wet tomorrow, so we'll see.”

An unhappy Marc Lieb was fourth in the Felbermayr-Proton Porsche reckoned he had the pace for a front-row time, but was held up by slower cars on both his fast laps. He also believed the Ferraris had not yet shown their full hand and could reveal even more speed in the race tomorrow.

First and second in the GTE-Am class went to 'guest' cars from the ELMS. Nicolas Armindo pushed very hard in the IMSA Performance Porsche to take pole ahead of the #81 AF Corse and #58 Luxury Racing Ferraris. “Rain would be a blessing tomorrow,” he said afterwards, “but as we're not in the WEC championship, the most important thing for us is learning about the car ahead of Le Mans.”

Fourth and fifth in the class went to the pair of Larbre Competition Chevrolet Corvettes, while the joint AF-Corse-Michael Waltrip Racing Ferrari 458 was sixth, piloted by Rui Aguas, Rob Kaufman and NASCAR star Brian Vickers – keep an eye on Motorsport.com tomorrow for an interview with the Sprint Cup driver about his first road course-racing exploits in Europe.