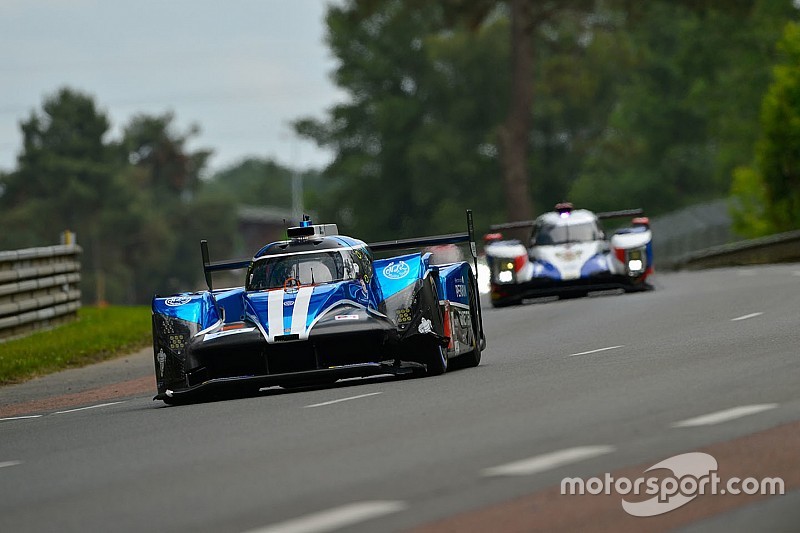 The Manor team believes that its Ginetta privateer LMP1 is a "solid building block" after the car's race debut in the Le Mans 24 Hours last month.

Manor is taking positives from the performance of the Mecachrome-powered G60-LT-P1 in the French enduro, despite failing to match the pace of the other P1 privateers and encountering a series of problems with both cars.

Sporting director Graeme Lowdon told Motorsport.com: "We know we need to improve our pace and our reliability, but it does look like we've got a solid building block.

"It appears we've got a good platform for development. The drivers all say it is extremely stable in the high-speed corners."

Lowdon added that getting one car to the finish, albeit after it had spent nearly a quarter of the race in the pits, was "a real achievement".

The G60 shared by Charlie Robertson, Mike Simpson and Leo Roussel was initially classified second to last, 99 laps behind the winning Toyota.

The car was was subsequently demoted a position with a six-lap penalty for a drive-time infraction.

The sister Ginetta shared by Oliver Rowland, Alex Brundle and Oliver Turvey retired in the 10th hour after suffering recurring electronic issues through the race.

The team believes that it can take major steps forward with more testing ahead of the resumption of the FIA World Endurance Championship at Silverstone in August.

"We need to spend some proper time with the car, which is what we haven't been able to do so far," he said.

Manor's test programme with the Ginetta was limited by the cash-flow problems that resulted in its non-participation in the opening round of the WEC at Spa.

It also ran without a Le Mans-specific aerodynamic configuration in the 24 Hours, which left it 10km/h down on the fastest P1 privateers through the speed trap.

New parts designed to shed downforce and drag were tried in practice and qualifying, but were put to one side for the race.

"We wanted to go with what we knew; we were fairly conservative," explained Lowdon.

Lowdon insisted that the financial issues that blighted its Le Mans preparations were now behind the team, which is entered under the Chinese flag as CEFC TRSM Racing.

"The money is coming through from China now, so as far as we are concerned we are moving forward and will do the rest of the season," he said.