What can Lucas di Grassi bring from the Audi LMP to Formula E?

Lucas di Grassi has some big shoes to fill.

He has been promoted to the #1 Audi car in WEC. That is a pretty big deal for the 29-year-old Brazilian.

He has run four races under the Audi banner, and never finished worst, or better than 3rd in his WEC LMP1 career.

This year, however, running a full schedule in the team’s championship winning car is a step in the right direction.

“Driving the #1 car has been a great achievement, I am thankful to Audi for having the trust it me to promote me to car #1 for the whole season,” said di Grassi.

“To be able to do the whole WEC season is a big step for me. Audi has built an amazing car. It’s a dream to be driving that car.” 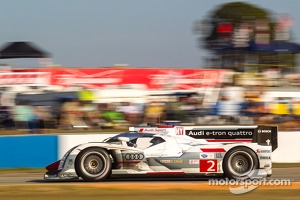 This season in WEC will be different from years past in the LMP1 category, as the fuel efficiency, electric motors regulations have been put in place.

“We are working hard, we are working on the LMP very hard. The new regulations, the car has to be completely new,” he said.

“Everything is different, from tires to size of the car, to engine and hybrid configurations, to rules. It is a big change, maybe the biggest change in the recent years of sports car history.”

With his association with Formula E, a completely electric open wheel series, di Grassi said driving styles might be similar between the two series due to the fact that saving fuel, or energy is a benefit.

“I wont have any advantage when it comes to the racing itself. Everyone is starting from scratch, every single track will be new (in Formula E),” he said.

“Because there is a limit amount of energy, your driving style has to be efficient. It’s more or less like WEC and F1, you have to be quick but you have to be energy efficient. A lap time divided by how much energy you spend to achieve that lap time. The skills to drive this car will be really high.”

Audi set the pace in The Prologue's first test session