Dominik Kraihamer was running in fourth position when he lost the rear of the Lotus, and ended up in a crash with the Toyota Hybrid.

After a two-month break, Lotus Praga LMP2 was back in action at the fourth round of the FIA World Endurance Championship in Sao Paulo. 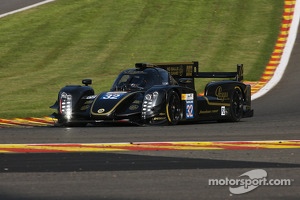 The weekend started off very promising during both free practice sessions on Friday. The team completed a total of 78 laps on the 4,309 kilometer long circuit in Interlagos. The target in both sessions was to collect data about the different tyre compounds in preparation for the race. Thomas Holzer (Driver #32) commented: “We were running trouble free on Friday and were able to do many laps. We could improve the car and the setup continuously and I was quite happy with the balance of the car.”

In the third and final free practice before qualifying, Lotus Praga LMP2 continued its upwards trend and improved its lap times. The hilly and bumpy track suited the Lotus Praga T128 LMP2 cars and everyone in the team was confident of showing a good performance in the qualifying session. Christophe Bouchut and Kevin Weeda were behind the wheel of car #31, Dominik Kraihamer and Thomas Holzer were in the hot seat of the sister car #32 during qualifying. With an average lap time of 1:28.556, car #32 qualified fifth in LMP2 class and with an average lap time of 1:30.169, car #31 qualified in position 7.

Lotus Praga LMP2 was happy with the result and the performance of the drivers. Kevin Weeda (Driver #31) showed a strong performance and improved his lap times in all practice sessions. The American did his best lap time in qualifying and was very happy: “It is good to be back in the race car after a long break. The sessions on Friday and Saturday were good for us and we didn’t have any problems. We tried different set-ups and tyre compounds and the car was well prepared for the race. It is a shame that my team mate Christophe Bouchut only could do one fast lap in qualifying as he was traffic. Maybe we could have had a better result. But I am very happy with our progress and that I did my best lap time in my first qualifying.”

The 6 Hours of Sao Paulo started off well for car #32 and after some laps, Dominik Kraihamer was running in fourth position in LMP2 class. After 35 minutes, however, the race ended prematurely for car #32 after a crash with a LMP1 car. Dominik Kraihamer commented: “I turned into curve 3 and lost the rear of the car. I tried to catch it and I went straight, but then it happened. It was a pity that the LMP1 car was next to me at that moment. I am very sorry for the team as we could have had a good race.”

Christophe Bouchut in car #31 had to do an unplanned pit stop early in the race. The car was taken back inside the garage after a gearbox issue. The team tried to fix it and Bouchut was able to go out on track again. Unfortunately, the Frenchman had to box again and it took until 90 minutes before the end of the race, until the gearbox was fixed and Kevin Weeda could go out again. The American did some laps to check the car, but the team lost too much time in the garage. As a consequence, car #31 was not classified. Christophe Bouchut commented: “It is a shame that we had problems with the gearbox during the race. In the sessions before, the balance of the car was good and we could improve ourselves continuously. We wanted to run as much as possible to collect mileage and valuable data for the next races. However, with the issues in the race, it was not possible to have a good result.”

Lotus Praga LMP2 is disappointed with the outcome of the race but pleased with the performance and progress of the car and drivers over the weekend. At the fifth round of the FIA World Endurance Championship in Austin (22nd September), the team wants to fight back and to improve again.