The grid includes five Latin American Drivers from Argentina, Mexico, Venezuela and, of course, Brazil who will compete for the winner’s trophy on the 4.309 km Interlagos track.

The first provisional entry list for the WEC 6 Hours of São Paulo on Sunday 1 September has been released with 28 cars entered for the South American round of the 2013 FIA World Endurance Championship. The grid includes five Latin American Drivers from Argentina, Mexico, Venezuela and, of course, Brazil who will compete for the winner’s trophy on the 4.309 km Interlagos track.

Brazil will be represented by Bruno Senna, who will be racing in the LMGTE Pro nr99 Aston Martin Racing Vantage V8, and Fernando Rees, who is returning to the WEC for the first time in 2013 in the LMGTE Am class nr50 Larbre Competition Chevrolet Corvette alongside Julien Canal and Patrick Bornhauser.

Bruno Senna needs no introduction to the people of São Paulo and the former F1 driver will return to racing at Interlagos at the wheel of an Aston Martin Vantage V8. After taking victory in the UK and second place in Belgium, Senna was leading the World Cup for LMGTE Drivers. but a crash for teammate Frederic Makowiecki at the 24 Hours of Le Mans meant no points for the team and the Brazilian driver will be hoping that racing in front of the Brazilian fans will mean he can return to winning ways at Interlagos. 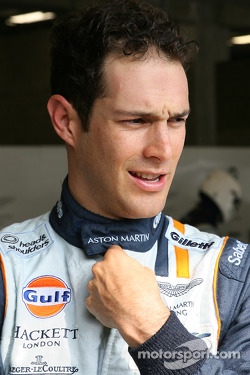 2012 LMP2 Driver’s Champion, Venezuela’s Enzo Potolicchio, has switched to the LMGTE Am class with his own team and victory in Round 2 in Belgium gave Potolicchio the hour of being the first driver in FIAWEC to win races in two different classes.

Mexico’s Ricardo Gonzalez had a disappointing start to the 2013 season with Oak Racing in the LMP2 class but this all changed in Round 3 when he stood on the top step of the podium at the world’s greatest race, the 24 Hours of Le Mans, in June with teammates Martin Plowman (GBR) and Bertrand Baguette (BEL).

WEC 6 Hours of Spa-Francorchamps race winner Luis Perez Companc from Argentina is the fifth Latin American driver and is competing for a second season in the nr49 Pecom Racing Oreca-Nissan alongside Nicolas Minassian (FRA) and Pierre Kaffer (DEU).

A total of 13 Le Mans Prototypes (LMP) and 15 LMGTEs will make the trip to Brazil. The race for the World title will continue in Round 4 with the nr2 Audi R18 e-tron quattro of Tom Kristensen (DNK), Allan McNish (GBR) and Loic Duval (FRA) fresh from their win in the 24 Hours of Le Mans, beating reigning world champions, and teammates, Andre Lotterer (DEU), Benoit Treluyer (FRA) and Marcel Fassler (CHE) to the chequered flag.

At Le Mans Toyota pushed the mighty Audis all the way to the chequered flag, with the nr8 TS030 Hybrid of Anthony Davidson (GBR), Sébastien Buemi (CHE) and Stéphane Sarrazin (FRA) finishing second. Twelve months ago the Japanese manufacturer scored their first win of the 2012 season at Interlagos.

They will be hoping that the South American round provides more of the same in 2013. Davidson, Buemi and Sarrazin will be competing in the sole Toyota entry is Brazil, the team deciding to withdraw the nr7 TS030 to allow Alex Wurz, Nicolas Lapierre and Kazuki Nakajima time to concentrate on developing the new 2014 car.

Rebellion Racing will be the only LMP1 Privateer entry following the withdrawal of Strakka Racing from the championship, however an overall podium is on offer for Nicolas Prost (FRA) and Nick Heidfeld (DEU) should one of the works teams have a problem in the 6 Hours of São Paulo.

Once again LMP2 will provide the quantity and the quality of the WEC grid with a nine car entry with anyone of them capable of taking victory in Brazil. After taking a 1-2 at Le Mans, Oak Racing now hold the top two places in the championship with the nr35 car of Ricardo Gonzalez, Martin Plowman and Bertrand Baguette holding a 4 point advantage over teammates Alex Brundle (GBR), David Heinemeier-Hansson (DNK) and Olivier Pla (FRA).

Round 1 winners Tor Graves (GBR) and James Walker (GBR) will be hoping for a return to the podium in the nr25 Delta-ADR Oreca-Nissan and are waiting to announce the identity of their teammate for the 6 Hours of São Paulo.

All eyes will be on the LMGTE Pro class, which is a straight fight between the works teams from Aston Martin, Ferrari and Porsche. The first race of the year at Silverstone went to Aston Martin, the manufacturer celebrating its 100th birthday at the home of British motorsport in style.

Round 2 in Belgium was won by Ferrari and then Porsche took a 1-2 finish at the 24 Hours of Le Mans on the 50th anniversary of the Porsche 911, with Marc Lieb (DEU), Richard Lietz (AUT) and Romain Dumas (FRA) taking in the view from the top step of the podium. However all of Brazil will be watching the nr99 Aston Martin Racing Vantage at the 6 Hours of São Paulo, which will be driven by Fred Makowiecki (FRA) and Silverstone race winner Bruno Senna.

The LMGTE Am class boasts an eight car line up with 24 Hours of Le Mans winners Raymond Narac (FRA), Jean-Karl Vernay (FRA) and Christophe Bourret (FRA) leading the way in the nr67 IMSA Performance Matmut Porsche but will face challenges from all corners of the highly competitive grid, including from Round 2 winners Enzo Potolicchio (VEN), Rui Aguas (PRT) and Matteo Malucelli (ITA) in the 8 Star Motorsports Ferrari 458 and the reigning LMGTE Am Team Champions Larbre Competition, the nr50 Chevrolet Corvette of Brazil’s Fernando Rees, Julien Canal (FRA) and Patrick Bornhauser (FRA).

Aston Martin Racing will field two cars in the LMGTE class, including the nr95 Vantage of Round 1 winners Christoffer Nygaard (DNK) and Kristian Poulsen (DNK), who will be racing in memory of fellow Dane Allan Simonsen, who was tragically killed while competing at the 24 Hours of Le Mans in June.

“We are very happy to announce a high quality 28 car grid for the 6 Hours of São Paulo. In 2012 we also had 28 entries for the race in Brazil so we are pleased to see the stability in the FIA WEC grid,” said FIA WEC CEO Gérard Neveu.

“The event in Brazil marks the half-way point of the 2013 FIA World Endurance Championship and after the summer break it provides the perfect backdrop for the start of the second half of the 2013 season. The entry list features several well-known South American drivers who will join us for their home race. Their presence will help us attract a large crowd for what will be one of the most exciting races of the season in one of the most beautiful countries in the world.”

Rebellion Racing will focus on WEC for the remainder of 2013