Larbre Competition were still celebrating their hard-earned one-three finish in Saturday’s Six Hours of Sao Paulo (September 15) when they received news that their race-winning #50 Corvette C6.R had been excluded from the results for a technical infringement. With the offending issue having been caused by an off-track excursion made in avoidance of a separate accident, the decision was all the more difficult for the French team to accept. 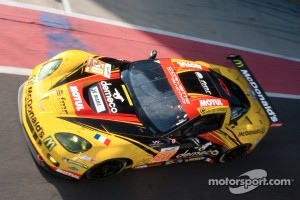 Taking the start in fourth position on the GTE Am grid, Larbre driver Fernando Rees cleanly negotiated the opening corner of the historic Interlagos circuit aboard the #50 C6.R. The Brazilian was then forced to take quick evasive action at turn four as several cars clashed ahead of him, diving to the outside to avoid making contact and causing a more serious accident. Though the local racer would emerge from the melee largely unscathed, the Corvette hit a high curb when leaving the circuit that launched it into the air, resulting in a heavy landing, before again having to jump over a raised section when re-joining the track.

Rees subsequently reported significant understeer but continued to run at a competitive pace, catching and overtaking the #55 JWA-Avila Porsche for second position. He then patiently reeled in the leading #88 Team Felbermayr-Proton Porsche, pouncing on a mistake by the German car at the bottom of the hill to make a clean pass into turn one. The Brazilian was then able to build a gap, despite continuing to fight understeer. His team-mates aboard the #50, French drivers Patrick Bornhauser and Julien Canal, would go on to deliver perfect stints aboard the C6.R as the team pulled out a three-lap advantage on their way to a commanding GTE Am class victory.

Meanwhile the #70 car of Pascal Gibon, Christophe Bourret and Jean-Philippe Belloc also drove a clean and consistent race to take the chequered flag third in GTE Am and join their team-mates on the podium. The all-French trio thus celebrated their second rostrum of the season, adding to the runner-up finish taken at the 12 Hours of Sebring.

However, several hours after the race’s conclusion Larbre were informed of the stewards’ decision to exclude the #50 for a ride-height irregularity. The team will contest this decision at the FIA International Court of Appeal.

Jack Leconte, Team Manager: “Unfortunately, during post-race scrutineering, the FIA technical delegate found that the height of the #50 car’s front bumper was under by just 8mm, which was a consequence of the impact it suffered when leaving the track to avoid an accident on lap one. As the part did not have an obvious crack, the delegate decided to maintain his position and exclude the #50 for not being within the regulations. This was despite evidence supplied by the Larbre team and some ACO scrutineers, notably affixing the #70 car’s front bumper to the #50 and thus proving that the ride height was within the regulations.

“The officials, race director and chief stewards rushed the matter and did not take into account or even view images from the race where it can be clearly seen that the #50 left the ground at turn four, or its later right-front contact with the #7 Toyota. Irregularity and partiality in the judgement process has forced me to appeal the decision in front of the FIA International Court. The result of the appeal and the performance of the team during the coming races will unquestionably demonstrate the spirit of the Larbre team, who show their talents on the track.”

Fernando Rees, #50 Corvette C6.R: “I ran the first two stints of the race. At turn four on lap one there were a number of accidents taking place, so I took to the outside of the corner to avoid the chaos. I caught a high curb on the outside, which launched the car and resulted in a big impact. I also made contact with some debris and then hit another curb when re-joining the track. After this we had huge understeer, especially in the fast corners, but I was able to catch the cars ahead and secure the lead. My team-mates drove perfect stints – fast, precise and without any mistakes – which allowed us to take a very special win. I am disappointed to have had it taken away but, given the circumstances, I am sure that we have a chance to recover the result. It is an obvious situation and everyone is aware that things like this happen in endurance racing. It’s part of the game.”

Patrick Bornhauser, #50 Corvette C6.R: “We had a superb trip to Brazil. Fernando really helped us with his knowledge of the circuit and this allowed us to save a great deal of time. I liked the track straight away and my lap times were immediately on a par with my team-mates’. We took a well-deserved team victory on the track and I hope that the result will be rectified in due course.”

Julien Canal, #50 Corvette C6.R: “I got a lot of pleasure from driving our Corvette at Interlagos. My team-mates delivered fast, solid stints and I was able to continue their hard work in order to take the #50 to the finish line in first position whilst also setting the fastest lap time of our crew. To be excluded post-race was disappointing and I hope that it will be corrected on appeal.”

Jean-Philippe Belloc, #70 Corvette C6.R: “This was a fantastic result for us. Christophe and Pascal have been fantastic and performed well throughout the race without making any mistakes. It was our best result since the beginning of the season and it was wonderful to climb the podium at this historic circuit.”

Christophe Bourret, #70 Corvette C6.R: “I’m thrilled with how Brazil went for us. We have taken our second podium of the season and, personally, I believe this was my best performance in the FIA World Endurance Championship to date.”

Pascal Gibon, #70 Corvette C6.R: “Interlagos was the first international part of our 24-hour race split over four events, all of which take place at famous circuits with very different layouts. I took the start for the first time during the championship and made sure to avoid the accidents taking place ahead of me. I then continued at a good and regular pace without making any mistake. Finally, it was a great pleasure to climb on the podium!”

Despite the exclusion of #50, Larbre’s strong performances throughout the 2012 season mean they continue to lead the FIA World Endurance Championship LMGTE Am Trophy. They travel to the series’ next round in Bahrain determined to extend that advantage by once again proving themselves the fastest team on the circuit.

Vautier and Rosenqvist team up in Blancpain Sprint

Ruberti to miss Le Mans after fracturing spine at Hockenheim