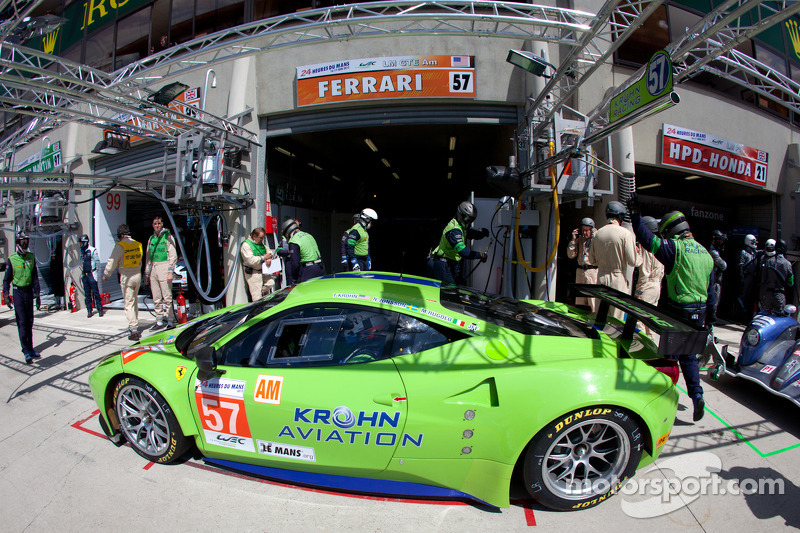 Krohn Racing is a team always striving to improve and better themselves as a team and in their racing performance.

Krohn Racing is a team always striving to improve and better themselves as a team and in their racing performance. The challenge of the 2012 FIA World Endurance Championship requires every entrant to be at the top of their game in order to achieve success. Even after a podium finish (third place) in the GTE-Am class at the 80th running of the 24 Hours of Le Mans, Krohn Racing has not stopped in their analysis of how to progress and accomplish their goal of a GTE-Am championship this season. 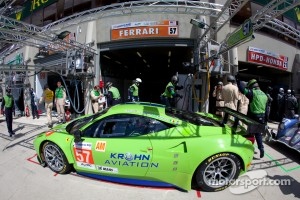 Team owner/driver Tracy W. Krohn, Nic Jönsson, and Michele Rugolo will be testing at the Snetterton Motor Racing Circuit in Norfolk, England on July 24-25. In addition to preparation for Round Four of the WEC, Krohn Racing will also be testing on Michelin tires. The Krohn Racing Ferrari F458 has been on Dunlop tires in the previous three rounds and last year while competing in the International Le Mans Cup series (ILMC).

Michelin, who made their first racing appearance with a victory in 1891 in a bicycle race in France, provides tires for many forms of motorsport including WEC, ALMS, WRC, Supercup, rally, and motorcycle road racing and supercross, to name a few.

TRACY W. KROHN, Team Owner/Driver No. 57 Krohn Racing Ferrari F458 GTE-Am:
“I am very pleased that we have succeeded in making arrangements with Michelin for Krohn Racing to use Michelin tires on our Ferrari F458 GTE-Am entry for the remaining events in the WEC. I have raced on Michelins at Le Mans and in the ALMS and their tires and service are exemplary. I believe we will now find more speed at the forthcoming events and hope this will propel our Ferrari to race wins and Championship victory.”

NIC JONSSON, Driver, No. 57 Krohn Racing Ferrari F458 GTE-Am:
“We are happy to be returning to racing with Michelin tires. The "Krohn Green Ferrari" has enjoyed successes on Michelins in GT in the ALMS and Le Mans in 2007 and 2009. They always provide a quality product and support. I can’t wait to try them on the new Ferrari F458 at the Snetterton (UK) test this month and see what we can do.”

DAVID BROWN, Krohn Racing Team Manager and Engineer:
“The competition in GTE-AM has become increasingly intense this year and we expect this to continue. If we are to win we have to constantly review our performance and attend to any area that can be improved. We are returning from our Atlanta base to Snetterton in two weeks to test on the new long circuit there. There has been little opportunity to test this year, so we have many items on the run list. Fortunately, Michelin are able to support us, starting at this test, which will maximize our potential to achieve information vital to increasing our performance.”

JEFF HAZELL, Krohn Racing Motorsport Manager:
“Changing tire provider in mid-year is unusual. We had enjoyed success in 2011 with Dunlop, whom we must thank for their contribution to those victories and for assisting us on short notice last year. As seen in our post race notes at Le Mans, we felt that we were uncompetitive in track conditions that prevailed for much of the event. We have been continually struggling in cooler race conditions and at Le Mans without all the race tire specifications available to run until the race we were denied the opportunity to tune the car to the race tire during practice. In light of this the Team had to review the tire situation and we are fortunate that Michelin have been able to respond to our request.”

The next round of the FIA WEC is the 6 Hours of Silverstone race is scheduled for Sunday, August 26th at the Silverstone Circuit, Northamptonshire, England.

Martin Brundle returns to race with Nissan at Silverstone