Krohn Racing had extensive program on practice day in Fuji

Tracy Krohn: “It was very slippery today and the track was quite green but we’re making good progress actually."

The No. 57 Krohn Racing Ferrari F458 today worked through an extensive program of set-up changes at Fuji International Speedway using the two 90-minute Free Practice sessions available. After the Category 3 typhoon which blew through central Japan earlier this week, the track has been washed of all rubber and grip and drivers throughout the field found the surface to be very slippery in both sessions. 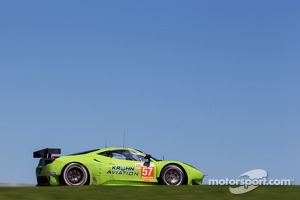 Team owner/driver Tracy W. Krohn and his teammates Nic Jonsson and Maurizio Mediani all had an opportunity to turn laps on the 2.8 mile (4.5km) circuit in preparation for Sunday’s sixth round of the FIA World Endurance Championship (WEC), the 6 Hours of Fuji. Last year the Krohn Racing Ferrari recorded one of its best results of the year and the drivers are determined to repeat that success.

TRACY W. KROHN, Team Owner/Driver, No. 57 Krohn Racing Ferrari F458 GTE-Am: “It was very slippery today and the track was quite green but we’re making good progress actually. It didn’t feel like it at first but at least the car is reacting better than it was in Austin! I am leaving here this evening with some confidence. We have a major change to make for tomorrow and we’ll see if that works and, if it doesn’t, we have a back-up plan so we feel pretty good about it.”

NIC JONSSON, No. 57 Krohn Racing Ferrari F458 GTE-Am: “It seems like the track is definitely green. We struggled a little bit with overall grip; it seemed like the track hadn’t started to rubber in yet. We were a bit more loose than we’d like to have been but we’re working on different set-up combinations to see if we can get the rear end of the car more compliant. We think we’re running a bit too hard on the tire but we don’t have many options there. We’re working on a few things and we’re trying something different again tomorrow and will see if we can make some improvements.”

MAURIZIO MEDIANI, No. 57 Krohn Racing Ferrari F458 GTE-Am: “It’s been a bit colder here in Fuji than we expected which maybe has not helped us but we are working in the right direction for Sunday. We are expecting it to rain for the race so that may help us as it makes everyone more even in terms of performance.”

The FIA World Endurance Championship 6 Hours of Fuji race will feature live timing and scoring at live.fiawec.com or catch it on RadioLeMans.com.