Although the No. 57 Krohn Racing Ferrari F458 only qualified seventh in class, team are pleased with the set-up going into Saturday’s WEC endurance finale.

Competitors were back today on the 5.451 km/3.387 mile desert track in Sakhir, Bahrain for another practice round and afternoon qualifying for Saturday’s six hour race. 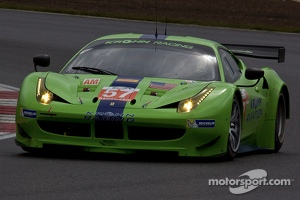 Dusk was near and temperatures were lower than expected as GTE-Am and GTE-Pro classes qualified just prior to the LMP1 and LMP2 qualifying session. Although the No. 57 Krohn Racing Ferrari F458 only qualified seventh in class, all three drivers (Tracy W. Krohn, Nic Jönsson and Maurizio Mediani) are pleased with the set-up going into Saturday’s WEC endurance finale.

Krohn Racing drivers Nic Jönsson and Maurizio Mediani were elected the two qualifying drivers for the No. 57 Ferrari F458 GTE-Am entry. Their qualifying position had an average time of 2:01.563.

TRACY W. KROHN, Krohn Racing Team Owner/Driver, No. 57 Krohn Racing Ferrari F458 GTE-Am: “Clearly, the car is better and we have begun the process of going to a different type of setup. With the addition of Rick Mayer to our engineering staff this weekend, we have felt the impact of an immediate change in the handling qualities of the car. We feel confident that we will put a very competitive car on the grid tomorrow. Although we were quicker today, we were also still trying a couple of new things and gained a lot of confidence by applying what we learned this week. This is a long race and weather will be a factor as it has been cooler than we anticipated with greater humidity which, of course, affects the handling characteristics of the car.”

NIC JONSSON, No. 57 Krohn Racing Ferrari F458 GTE-Am: “We have a new engineer this weekend, Rick Mayer, but he has extensive experience with the Ferrari brand running the Risi Ferraris for years with lots of success. The first practice session was more of a session where we bedded new brakes etcetera for the race and tried to get familiar with some of the set up changes and philosophy that Rick brought along. After a few tweaks and discoveries we have found a pretty good balance in the Krohn Ferrari for the race. Qualifying was a much better session and run than the result may show. We feel that we have made progress and that we have a consistently good and solid car for the race. It may not be ultimately the fastest car over one lap, but I believe we have a car that we can look after the tires well and that way become a viable contender for tomorrow’s race.”

MAURIZIO MEDIANI, No. 57 Krohn Racing Ferrari F458 GTE-Am: “I feel that car set up here is better compared to past races. We need a few adjustments and I’ll be ready for the race. Yesterday during the night practice the car set up was good and lap times were not too far from the top. That’s why I thought we would be in a better position in today’s qualifying round. Anyway, the race tomorrow will be long and I’m confident that we are in a good position to be very fast.”

RICK MAYER, Krohn Racing Race Engineer: “We had a productive Friday leading up to qualifying. We made some minor setup changes for the final practice and a gear change which helped the car. We worked through the final tire combination options and now have a better tire strategy for the race. Qualifying saw our best times of the week but admittedly qualifying isn’t our strong point. We’re confident we have a competitive and balanced race setup for the six hour race. All the drivers are comfortable and confident of the last WEC race of the year.”