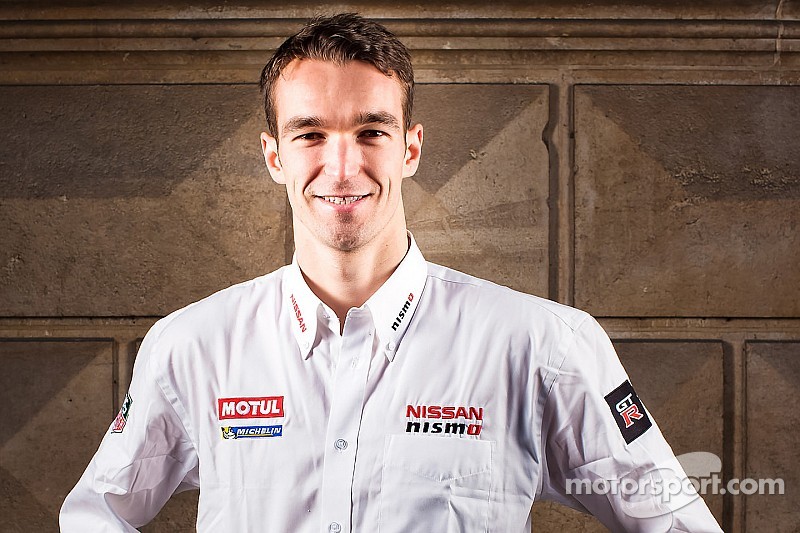 The British youngster has been snapped up by Nissan as one its six full-season FIA WEC drivers. Sam Smith has seen every one of his endurance races, and was the only journalist to witness his only previous LMP1 test last summer.

There will be those who didn’t follow endurance racing closely during 2014 that will wonder who Harry Tincknell is and how did he get to be a works Nissan NISMO driver for 2015?

For those not attuned to the domestic Formula Three scene in the UK, the very same questions were being asked this time last year. Twelve months on and witnesses to Tincknell’s extraordinary 2014 campaign pay testimony to Nissan’s decision on employing him as one of the six drivers that will tackle a full season of FIA World Endurance Championship this season.

In LMP2 last year with Jota Sport and their exquisitely prepared and run Zytek Z11SN (now Gibson 015S) Tincknell came, saw and conquered. After a handful of tests he arrived at Silverstone in April and utterly destroyed the competition, taking a clear pole position by 1.152s.

It was admittedly a circuit he knew well but so did most of his competition, which included reigning ELMS champion Nelson Panciatici (Signatech), highly rated French hotshoe Tristan Gommendy (TDS), and ex-F1 drivers Christian Klien (Morand) and Karun Chandhok (Murphy).

The following month Jota Sport had been through a torrid time. Tincknell’s team mate Simon Dolan had crashed heavily whilst leading at Silverstone and a new monocoque was built up for the Spa FIA WEC round, where the team enjoyed a fine run to second place in a one-off cameo appearance.

At Spa, Tincknell set the teams’ fastest time of the weekend in Free Practice 2, just under a second quicker than his team mate (then and now) – Marc Gene.

If the world was not sitting up and taking notice, it did so at Le Mans the following month. It was Tincknell’s first visit to La Sarthe. It didn’t show.

After playing himself in gently during the official Test Day on June 1, he came back for his second stint at the wheel after lunch and immediately registered a 3m41.855s on his very first flying lap.

It got better. In qualifying his 3m37.674s was just 0.065s from Gommendy’s eventual LMP2 pole time. Seasoned observers were crunching the numbers and becoming more and more impressed. One of them was Nissan’s Darren Cox.

In the race Tincknell was on average the quickest of the LMP2 field. Of the 121 laps he completed during the race his average was 3m39.814s, which was marginally quicker than the second fastest - 2015 Nissan team mate – Jann Mardenborough.

It gives you a measure of how good Tincknell was in the Jota LMP2 last season when his own team was left speechless by his Silverstone pole lap. The Jota Sport team has some gifted people within it, especially Tim Holloway, the original designer of the Zytek LMP car. He was an immediate fan of Tincknell’s, as was former racer and one of the founding fathers of the team – Sam Hignett.

“Of course we are sorry to see him go,” Hignett told me recently. “He was a real find and will have a great career at the top of endurance racing. We would never stand in a driver’s way if they got an opportunity like Harry has now. It is sad in a way but it just makes us, as a team, more determined to find another one like him.”

I can think of many more similarly impressive facts on Tincknell’s first season. But bold statistics only tell part of the story. As well as the natural pace comes a genuine intelligence and unflappability. For, as he was then, a 22 year old, this was very impressive indeed.

Last August, this reporter was the only racing journalist to witness Tincknell’s very first laps in an LMP1 car at Misano in Italy. Considering the car was the actual Audi R18 e-tron quattro that had won Le Mans less than two months previously, it was to be a rarefied occasion.

At the briefing, held personally by Dr Wolfgang Ulrich and #2 Audi race engineer – Leena Gade, it was made absolutely clear that they expected their pride and joy to emerge from the day without bruise or contusion.

Sitting in on the briefing made me feel nervous to the point of stutter and I wasn’t even driving the thing! Tincknell was a vision of calm and professionalism, chatting intently to Dr Ulrich, Gade and Marcel Fassler, who was there to ‘warm up’ the R18 which had just taken him to his third Le Mans win.

There were to be only a handful of laps for Tincknell. They went well and he compared favourably to Fassler on tyres of a similar vintage. He was just 1.6s away from the Swiss after just a few laps at the wheel.

Later that day, over a glass of wine, Gade told me her thought on Tincknell: “He did well. It was pleasing that he came in and gave some instant feedback. He wanted to know the optimum time for the lap as he knew he’d lost a little at the final corner. You can never take the competitive edge off a racing driver.”

The following day we are driving along the Autostrada to Bologna airport. Tincknell starts a conversation about the Nissan LMP1 programme and my ears prick up. The rumours of a front-engined design were starting to emerge and he was gauging opinion from me after having been approached by Darren Cox the previous month.

He played it cool and it wasn’t until much later in the season that the clues started to fall in to place. The Monday after the COTA round of the FIA WEC, Tincknell was on his way to meet Darren Cox, Ben Bowlby, et al.

As Motorsport.com revealed earlier this month there had been initial concerns about a driver of Tincknell’s height – 1.83m – being comfortable in the cockpit but these soon subsided.

If you were going to employ a hugely experienced and intelligent racing driver for a new LMP1 project, Marc Gene would likely be at the top of the list.

The 40-year old is a cast iron, no-brainer addition to Nissan’s programme, and one that will also bring a vast amount of recent knowledge regarding new LMP1 systems for the Nissan engineers to chew over. Gene is also one of the most technically gifted drivers of his generation and has conducted perhaps more laps in an LMP1 car than anyone else.

At the unveiling of the 2015 Le Mans 24 Hours and FIA WEC entries three weeks ago I asked Harry Tincknell about Gene, who shared the Jota cockpit with him at Spa and in practice and qualifying at Le Mans.

“He made the right impressions on everyone straight away and his knowledge is formidable,” said Tincknell. “What he brings to a team is hard to describe but is best summed up as just this massive capability to set-up a car and to analyse a race situation and how the maximum can be extracted from tyres, chassis, fuel, you name it – he knows how best to do it.

“He will be a huge asset to us in developing the Nissan GT-R LM NISMO. I would really love to drive with him again but I will have to wait and see if we are in the same car.”

You’ll hear from many drivers who are not fortunate enough to get a chance at topline LMP level that LMP2s are a synch to master.

Sour grapes? Well, possibly. The LMP2 cars are not overly difficult to drive compared to an F3 car but what these naysayers fail to understand is the transition from selfish single seater racer to team player and multi-adaptable strategy driver. All of this takes a major driver discipline re-boot.

At the top end of LMP2 drivers, raw talent stands out. Pla, Gommendy, Tincknell, Panciatici, Brundle, Mardenborough and when they made some cameos in ELMS last year – Nathaneal Berthon and ‘Pipo’ Derani are evidence of that.

Three of those mentioned above are now fully fledged LMP1 manufacturer drivers with Nissan Motorsports. How will they get on 2015?

This is a question which will have many layered and inconclusive answers whatever happens this season. What will be more interesting is what the answers will be at the end of 2016. My guess is that a new and exciting breed of young endurance driver has been born and that they will eventually nip at both the ankles of the established and emerging stars at Audi, Toyota and Porsche.