After clinching its first FIA World Championship title two weeks ago in Japan, Honda Performance Development wrapped up its inaugural season of World Endurance Championship competition with class podium finishes in both the P1 privateer and P2 categories Sunday at the season-ending Six Hours of Shanghai in China. 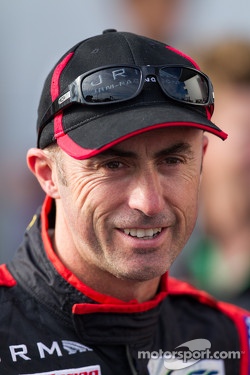 For the second consecutive race, the British JRM team led the way for HPD, finishing second in the privateer class and fifth overall to equal its best result of the season, scored two weeks ago at the Six Hours of Fuji.

The JRM trio of David Brabham, Karun Chandhok and Peter Dumbreck started its Honda-powered HPD ARX-03a from the privateer category pole and fourth overall, their best qualifying result of 2012.

The team fought both fellow HPD team Strakka Racing and a pair of Lola Toyotas from the Swiss Rebellion Racing organization for the opening two hours.

The Strakka HRX-02a was delayed first by a puncture, then contact from a factory Audi P1 entry required a second unscheduled pit stop to replace the rear bodywork, dropping the team several laps off the pace and putting drivers Jonny Kane, Nick Leventis and Danny Watts into recovery mode for the remainder of the race.

In the final hour, a series of dramatic events determined the result. Following contact while passing a GT-category Corvette, JRM had to pit to replace damaged bodywork, resulting in a long final pit stop, while mechanical failure ended the day for the Rebellion entry of Neel Jani and Nicolas Prost with just minutes left in the race.

Brabham chased down the second Rebellion Lola in the closing laps, but took the final checkered flag of the season in second, just 8.7 seconds short of the class win, with Strakka rounding out the privateer podium, third.

In P2, the Florida-based Starworks team followed their world championship-clinching finish at Fuji with another second-place run for drivers Ryan Dalziel, Enzo Potolicchio and Stephane Sarrazin.

The trio crossed the finish line in its HPD ARX-03b Honda just 36 seconds behind the class winning ADR-Delta team, after six hours of trouble-free racing.

In 2012, the first year for both HPD and Starworks on the world championship stage brought P2 class victories at the 12 Hours of Sebring, 24 Hours of Le Mans and Six Hours of Sao Paulo in the eight-race series.

Today’s race in China concluded the 2012 FIA World Endurance Championship. The 2013 season opens on April 14 with the Six Hours of Silverstone in England and will once again include eight races in Europe, North and South America, and Asia.

I think the momentum we gained towards the end of the year was very good. The team has been learning about this car and this type of racing, so to run strongly at the end is very pleasing.

This race came down to tire management, and I just didn’t have enough at the end to hold off the [class winning] Rebellion [Racing team], but finishing second was another solid result. It’s been a good season.

It always takes a while for a team to get it together with a new project, but I think we caught up very well and made a lot of progress.”

Starting with the opening race, back at Sebring last March, there have been many significant race wins along the way, including P2 category victories at the 12 Hours of Sebring and 24 Hours of Le Mans that highlighted the first World Championship for HPD.

Everyone at HPD and Wirth Research deserves accolades for what was a significant effort to achieve this success.

Congratulations also go out to all of our partner teams: Starworks for its first world championship in P2; and our P1 teams Strakka Racing, JRM and Oak Racing, who all played such strong roles in the privateer P1 title fight.

This year’s racing has ended, but our attention has already turned to our off-season development program, to ensure a continuation of the success we have all enjoyed this year in 2013.”

Season ends on a high for Nissan in Shanghai