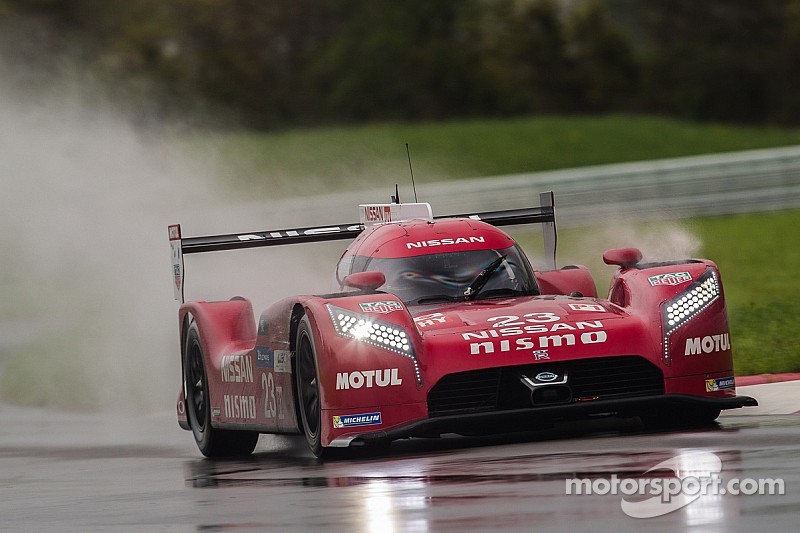 In his second column for Motorsport.com, Harry Tincknell has been testing Nissan's radical LMP1 and getting his elbows out in the European Le Mans Series at Silverstone.

So it’s been a very busy time for me since my first column for Motorsport.com. I had the opening European Le Mans Series race with JOTA Sport at Silverstone in between a couple of four-day tests with Nissan over in America.

In the first of those Nissan tests, I was able to get my first laps around the Corvette Test Track in Bowling Green, Kentucky. It’s relatively short in terms of laptime but has been designed with Le Mans in mind and has almost exact replicas of the Mulsanne chicanes and the Porsche Curves, so it gives us a great idea of what we will face in June.

We were mainly working on chassis and aerodynamic set-up and we made some really major gains in those areas. In high-speed sections, the car is now very well balanced which gives me a lot of confidence to push hard. We also managed to get some endurance running in, completing multiple stints back to back.

The car is exceptionally good on its tyres, and I was able to stay remarkably consistent on these longer runs, which are a great sign for when we make our race debut at Le Mans in June.

At the second four-day test, I was driving alongside Marc Gene, Max Chilton, Michael Krumm, Al Buncombe and Jann Mardenborough. Marc and I get on very well having worked together at JOTA Sport last year.

He was loaned to JOTA from Audi Sport for the Spa and Le Mans races – although after Loïc Duval’s accident on the Wednesday at Le Mans, Marc had to go back to Audi as he was their reserve driver. It was the first time we’d tested together and it was great to learn from all his years of experience once again.

It was also the first time that I’d met Michael [Krumm] and we got on really well. That’s important as I’ll be sharing the Nissan with Michael – and Olivier Pla – at Le Mans so we’ll have to work very closely to get the best out of the car.

We also had the Gibson LMP2 car at the test, another great ‘friend’ of mine! It was important to have some sort of benchmark; even if it’s an LMP2 car as this track is so new so we really have no data to go off. I was able to jump back and forth from the P1 to the P2, which was good fun, and ideal for me as I’m driving the Gibson for JOTA in ELMS – and now in the WEC at Spa.

I honestly couldn’t believe how slow the LMP2 car felt compared to the LM P1 machine, especially on acceleration. On the Gibson’s first flying lap I honestly felt like I had a problem!

It was strange because I’d already driven the P2 Gibson at a test at Paul Ricard and in a race at Silverstone earlier this month, but driving it immediately after driving the P1 showed the difference in performance. But I guess that it shows we’re making enormous progress with the Nissan and getting closer and closer to the ultimate LM P1 pace.

Compared to the first test, we’ve made a lot of laptime gain, over a second on such a short track is big progress. I’ve had some people suggest what lap times we are doing but they’ve all been well wide of the mark… we’re going to surprise a few of them come Le Mans.

The last two days of the test were predominately wet, but I heard a rumour that Le Mans is sometimes prone to a downpour! This was a great opportunity to try our Michelin wets, especially the bespoke rear tyre.

I think this car is going to be really strong in wet conditions, like the dry it gives you a lot of confidence to push and it displaces the water really well. The drainage at the track isn’t fantastic but the car handles the standing water well and we were able to complete a lot of laps when a traditional racecar would be sat in the pits waiting for it to dry up.

This meant we provided Michelin with a lot of data to go away and analyse closely. I’ll be back out to the States testing again soon before the whole operation is moved over to the UK to begin the final preparations for Le Mans.

In between these tests I was at Silverstone for the ELMS/WEC double-header weekend. I absolutely love Silverstone, especially when the sun is shining and that’s exactly what we got. The weekend started well in testing and we finished first and second in the two Free Practice sessions on the Friday.

We were very happy and going into qualifying, I was confident of achieving pole-position. Unfortunately it didn’t quite work out like that as I spun on the first flying lap doing a 360 through the gravel. Not ideal preparation for a qualifying run!

I think I was a bit optimistic with the grip level of the track and asked too much and lost the rear of the car. I was very disappointed with myself but I didn’t have time to worry about that as I still had about 7 minutes left of the session.

With completely flat spotted tyres and a car full of gravel, I managed to haul us onto the front row of the grid. It was a good recovery but I shouldn’t have made the error in the first place. It took me a lap to get my bearings back as I could barely see anything once the car was over 100mph due to the vibrations from the tyres. I was feeling a bit dizzy by the time I came in.

Filipe [Albuquerque] took the start of the race but there was a nasty shunt at the first corner, which resulted in a long Safety Car period to clear up the mess. Once the racing resumed, Filipe managed to get the car into the lead and build up a gap. He did a great job and handed over to Simon [Dolan] for his double stint after 90 minutes of the race.

Simon was in a tricky position because he had to push as hard as he could but Silverstone is a very critical race on fuel and he needed to save as much as he could. I thought he drove a really great couple of stints, managing the fuel well while banging in some great lap times in second place behind the Greaves Motorsport Gibson.

There was another Safety Car that bunched the field up and the TDS Oreca 05 that, as you may remember in my last column, I predicted would be fast, used this as an opportunist time to pit for new tyres and to switch to the super-quick Tristan Gommendy for the final two stints. When racing resumed, the way Simon was able to hold off the TDS car for 4/5 laps was amazing and would make a big difference come the end of the race.

Simon pitted to hand over to me and I exited the pits in P3, two seconds behind the Greaves car and about 20 seconds from Gommendy. From what I’m told, what ensued was one of the best finishes to an ELMS race ever! It was certainly pretty exciting from where I was sat.

I managed to grab the fastest lap on my first flying lap and set about closing the gap down to Jon Lancaster in P2. I felt the battling between us crossed the line a couple of times but I managed to make my way past when he got caught out in traffic.

I radioed to the team to ask how far down the road Gommendy was but then realised I could see him in the distance. We were catching him at a rapid pace as the Oreca’s tyres started to fade.

Unfortunately, I caught a GT car at totally the wrong place at Copse and I dropped down third at the next corner where I did my second 360 of the day. There was contact with Lancaster but I felt that one was a racing incident.

I only dropped 7 seconds and just tried to push as hard as I could to make the time back up as I could see the leaders were about to do battle. And I had a grandstand seat for the contact between them on the entry to the National Straight.

I think the replays show it probably wasn’t on and there would have been better and safer opportunities in the remaining laps but it meant I was up to P2 and right back in the hunt. I tried everything over the final couple of laps but there wasn’t any clean ways to get passed and we crossed the line 0.3 seconds apart, probably the closest ELMS finish ever.

It was the first time I’ve ever been on a podium where there’s been boos and I was certainly feeling aggrieved about one of the moves where I was forced off the track at 150mph. But that’s water under the bridge now.

Tristan was pretty vocal in the press conference and I do agree that it could all end in tears at some point if the top drivers are forcing each other off the track and it’s certainly not the spirit of Le Mans or endurance racing.

My season has ‘expanded’ as JOTA offered me the chance to go back to Spa for the next WEC race – the team’s traditional ‘warm-up’ race for Le Mans. Of course it didn’t take me long to think about it and I reckon the new Gibson upgrade will bring about improvements from last season, with the reduced drag a big plus.

The circuit needs no introduction. It’s one of the few remaining ‘old school’ greats. I’ll have Simon and Mitch Evans alongside me, so we’ve definitely got the tools to go one better than our second place there last season.

Busy, busy but that’s how I like it. Until the next time!