The track action at Spa gets underway at 09:00hrs on Friday with the first free practice session.

This weekend will see Round Two of the FIA World Endurance Championship, which provides all of the WEC teams with six-hours of flat out racing that serves as a final dress rehearsal for the action that is to come at the Le Mans 24 Hours and Roman Rusinov has set his sights high. 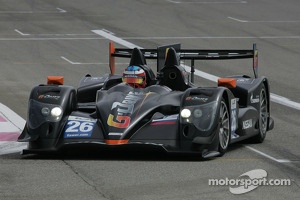 The No.25 G-Drive Racing by Delta-ADR entry took first blood with a win at Silverstone a few weeks ago but the weather played a large part in stopping a 1-2 for G-Drive when a sudden rain shower sent John Martin into a spin when he was leading the race in the No.26 G-Drive car, as his team mate Roman explains:

“We had been fast all weekend at Silverstone and John was leading the race by almost a minute before he got caught out by a slippery bit of the track during a sudden heavy shower. We salvaged a finish though and collected some all-important championship points.”

“We are now fully focused on Spa,” continued Roman. “If we can get through the six hours with no technical problems or accidents we can be on the podium but our goal is always to win.

Spa is a very important race to us as it is the last event before Le Mans. I love the circuit, as it’s fast and technical. It is a challenging track and the weather can often be very unpredictable, just as it can be at Le Mans, so it is great preparation for the 24 Hours.”

As at Silverstone, Roman shares the No.26 G-Drive Oreca-Nissan with John Martin and Mike Conway and the three drivers have quickly gelled to become a formidable team.

“We have a very strong line-up,” said Roman. “We fit perfectly together as a tight team and from that base we can push for the top results.”

The track action at Spa gets underway at 09:00hrs on Friday with the first free practice session. LMP2 qualifying takes place later that day at 19:30hrs and with nine of the 11 LMP2 cars being powered by the Nismo-tuned Nissan VK45DE V8 engine it looks set to be a very tight grid.

Lotus Praga LMP2 preview to the 6 Hours of Spa