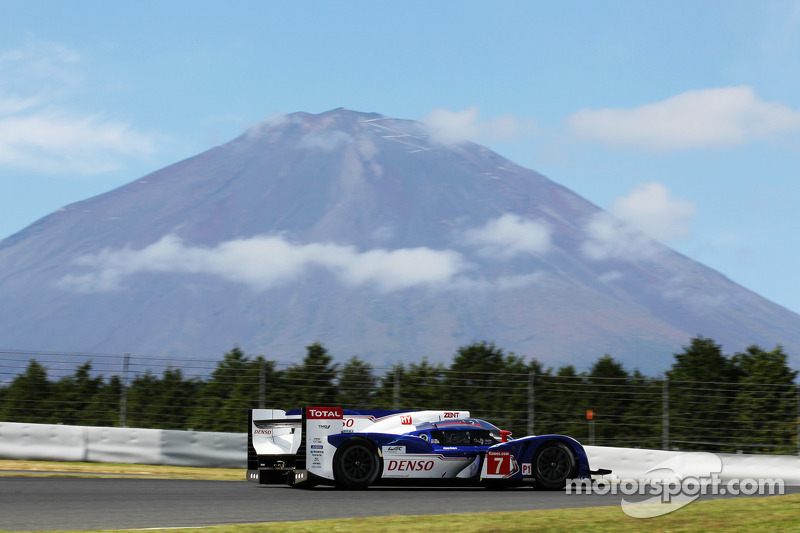 The FIA World Endurance Championship teams prepare for the 6 Hours of Fuji with at least eight Japanese drivers on the entry list.

On the 18-20 October round 6 of the 2013 FIA World Endurance Championship will take place in Japan at Fuji International Speedway.

80 drivers from 23 different nations will compete in 29 cars in the shadow of Mount Fuji to see who will be victorious in the second running of the 6 Hours of Fuji.

Last year one of the largest crowds of the 2012 season watched a thrilling race that was won by Toyota Racing when Kazuki Nakajima took the chequered flag at the end of the 6 hour endurance race to record the Japanese manufacturer’s second win of 2012. Toyota has yet to win a race in 2013 but with two TS030s on the grid and on the back of a strong performance in Austin last month, it will be looking for that elusive first win at home.

There will be no less than eight Japanese drivers on the grid in Fuji, with Kazuki Nakajima joining Alex Wurz and Nicolas Lapierre in the no7 Toyota Racing TS030 Hybrid in LMP1 for the car’s first race since the 24 Hours of Le Mans in June.

Kamui Kobayashi is racing with Ferrari for AF Corse alongside Finland’s Toni Vilander in the no71 Ferrari 458 Italia. The pairing has taken three LMGTE Pro podiums in the first five races with a season best of second at Silverstone. Kobayashi will be looking to go one better in Fuji in front of his Japanese fans,

The only female driver on the grid, Keiko Ihara, will be in the LMP2 class Nissan-powered no45 Oak Racing Morgan alongside team owner Jacques Nicolet. Shinji Nakano makes a welcome return to the FIA World Endurance Championship in the no25 Delta ADR Oreca-Nissan, joining LMP2 front runners James Walker and Tor Graves.

Two new cars will grace the grid in Japan, the first being the no27 Gainer International Zytek-Nissan. The Japanese team will be fielding a three driver line up with Katsuyuki Hiranaka and Masayuki Ueda being joined by Sweden’s Bjorn Wirdheim.

Audi’s Allan McNish, Loïc Duval and Tom Kristensen currently hold a 33-point advantage over their teammates, reigning world champions André Lotterer, Benoît Tréluyer and Marcel Fässler, at the top of the World Drivers’ Championship points table. Audi also hold a 69-point advantage over Toyota in the Manufacturers’ Championship but the Japanese team is back up to full strength with two cars for its home race. Rebellion Racing is once again the only LMP1 Privateer team with its Toyota-powered Lola Coupé, Andrea Belicchi and Mathias Beche performing the driver duties for the Swiss team while Nick Heidfeld and Nicolas Prost defend their 2012 Petit Le Mans title in the United States.

With the addition of Gainer Racing and KCMG, ten cars will form the LMP2 grid in Fuji with the Pecom Racing team holding a slim 3 point advantage in the LMP2 Teams’ Trophy battle. For the Drivers’ Trophy the advantage belongs to Le Mans winners Bertrand Baguette, Martin Plowman and Ricardo Gonzalez in the no35 Oak Racing Morgan, 3 points ahead of the Pecom Racing trio Luis Perez Companc, Nicolas Minassian and Pierre Kaffer. The no26 G Drive Racing trio of John Martin, Mike Conway and Roman Rusinov have tasted the victory champagne in Brazil and in Texas and will be looking for the hat-trick in Japan.

The Lotus-Praga team will be once again fielding two of its Lotus T128s with Kevin Weeda, James Rossiter and Vitantonio Luizzi driving the nr31 car, while Dominik Kraihamer, Jan Charouz and Thomas Holzer travel to Japan on a high note after their first podium finish in Texas last month.

With the no98 Aston Martin Racing Vantage missing from the grid in Japan, it is a straight fight between the two-car entries from Ferrari, Porsche and Aston Martin in LMGTE Pro. After winning at the Circuit of the Americas Fred Makowiecki switches to the no97 Vantage and drives alongside Darren Turner and Stefan Mücke in Japan, while Mako’s teammate in Texas, Bruno Senna, changes class to the no95 LMGTE Am car of Christoffer Nygaard and Kristian Poulsen.

Ferrari’s Gianmaria Bruni and Giancarlo Fisichella lead the World Endurance Cup for GT Drivers with a 3 point advantage over Porsche’s Marc Lieb and Richard Lietz, with Mucke and Turner close behind, just 13 points adrift of the Italians. In the Manufacturers’ title chase Ferrari is 12 points ahead of Aston Martin and 19 ahead of Porsche but, with a maximum of 44 points on offer in Japan, the battle is still very tight.

Paul Dalla Anna will not be travelling to Japan, leaving the driving duties in the no99 Aston Martin Racing Vantage to Pedro Lamy and Ritchie Stanaway. Patrick Pilet and Jorg Bergmeister will share the no91 Porsche AG Team Manthey 911 RSR.

Once again there is an eight car grid for the LMGTE Am grid. Victory in Brazil and the United States has propelled Aston Martin’s Jamie Campbell-Walter and Stuart Hall to the top of the Drivers’ Championship table, just 4 points in front of 24 Hours of Le Mans class winners Jean-Karl Vernay and Raymond Narac in the IMSA Performance Matmut Porsche. Campbell-Walter and Hall will be joined fellow Briton Jonathan Adam in the no96 Aston Martin Racing Vantage.

The line up in the sole Chevrolet Corvette is unchanged with French drivers Patrick Bornhauser and Julien Canal being joined once again by Brazil’s Fernando Rees. The driver line-ups also remain unchanged for the no57 Krohn Racing Ferrari, the no61 AF Corse Ferrari, the 8 Star Motorsports Ferrari (Davide Rigon back on duty in the latter) and the no88 Proton Competition Porsche.