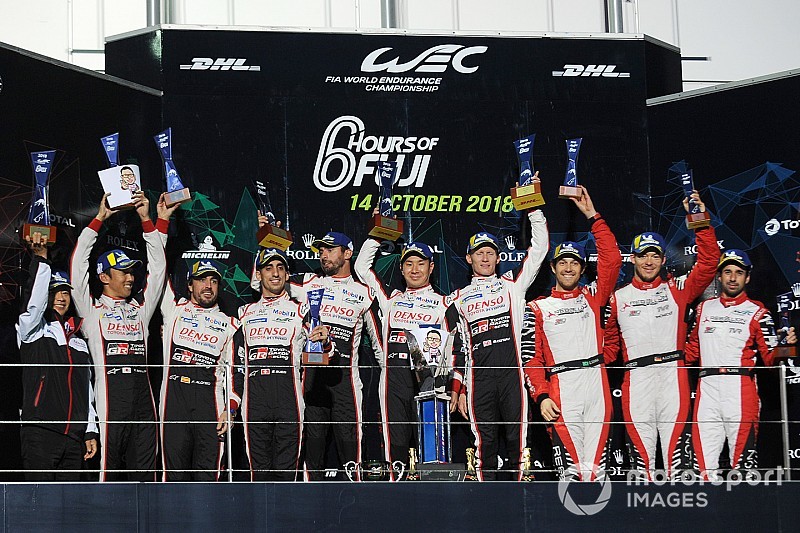 After losing pole position on Saturday, the #7 crew responded in emphatic fashion with an 11-second win over the sister #8 TS050 Hybrid of Sebastien Buemi, Kazuki Nakajima and Fernando Alonso.

It marks Kobayashi and Conway's first WEC win since the 2016 Fuji race, as well as the first win in the series for Lopez.

The two Toyotas were once again in a league of their own, with the best of the non-hybrid LMP1s - the #1 Rebellion R-13 shared by Andre Lotterer, Neel Jani and Bruno Senna - ending up four laps down in third.

From eighth on the grid the #7 Toyota, started by Kobayashi, had carved its way through to second behind the polesitting #8 car by the end of the second lap on a wet track.

An off-sequence first pitstop set the #7 crew up to take command when a puncture for the MR Racing Ferrari spewed debris all over the main straight and brought out the safety car after 30 minutes.

Nakajima pitted the #8 Toyota just before the pitlane was closed, emerging behind Kobayashi, who inherited a five-second advantage when both men made their second stops to switch to dry tyres.

Buemi was able to catch Kobayashi in the third hour after taking over from Nakajima, but wasn't able to pass before Kobayashi finally pitted to hand over to Conway.

Conway pulled away to the tune of 20 seconds as the #8 car appeared to struggle with balance during Alonso's turn at the wheel, leading to a rear deck change when the Spaniard made way for Nakajima in the penultimate hour.

Lopez had taken over the #7 by this stage, maintaining the lead Conway had built, before Kobayashi returned to the cockpit for the final stint to take the chequered flag.

Rebellion came out on top in its battle against SMP Racing to finish as top privateer, although the Russian squad held a decisive edge during the wet first hour.

Jenson Button even led overall after the first 60 minutes by virtue of leaving his first pitstop very late in the #11 BR Engineering BR1, before inevitably falling behind the Toyotas.

But the pendulum swung back towards Rebellion when the track dried, and by the end of the second hour the #1 car had established itself in third, dropping off the lead lap in hour three.

The SMP podium challenge ended when the #11 car shared by Button, Vitaly Petrov and Mikhail Aleshin hit alternator trouble in the penultimate hour and spent 12 minutes in the garage before recovering to fourth, 11 laps down.

Both the #3 Rebellion and #17 SMP entries retired. Gustavo Menezes crashed the #3 car exiting Turn 1 under the safety car, while the #17 stopped out on track late on with a fuel system issue, having previously lost a wheel.

ByKolles' solo ENSO CLM P1/01 was a distant fifth after struggling with turbo issues for much of the race, while DragonSpeed's customer BR1 retired from fourth place in the latter stages with an gear selection problem.

The LMP2 class was again dominated by Jackie Chan DC Racing, as the all-Malaysian #37 crew of Jazeman Jaafar, Weiron Tan and Nabil Jeffri came through for their first class win of the season.

Both Jota-Sport DCR Orecas benefitted by pitting just before the pitlane closed early on, and were given a comfortable buffer by nearest rivals TDS Racing when Matthieu Vaxiviere spun in the second hour.

Jaafar, Tan and Jeffri led the sister #38 car of Ho-Pin Tung, Stephane Richelmi and Gabriel Aubry by 26 seconds, with the #36 Signatech Alpine recovering from an early spin by Nicolas Lapierre to claim third.

The polesitting DragonSpeed Oreca endured a nightmare race, with Anthony Davidson slipping down the order in the early stages before any hopes of a first class podium were ended by a lengthy trip to the garage late on.

Porsche came through for an unlikely win in the GTE Pro class, with Kevin Estre and Michael Christensen extending their points advantage with a second victory of the season in the #92 911 RSR.

But their victory came as a result of the #71 AF Corse Ferrari of Sam Bird and Davide Rigon suffering a puncture in the penultimate hour, when it enjoyed a lead of 13 seconds, as a result of contact with the #31 DragonSpeed car.

After the early safety car which shuffled the order, it was the #82 BMW shared by Antonio Felix da Costa and Tom Blomqvist that took a net lead, but as the race progressed it became clear the M8 lacked the pace to win, slipping behind both the #71 Ferrari and the #92 Porsche in hour four.

But the Bavarian marque held on to take second, just ahead of the leading Ford GT of Harry Tincknell and Andy Priaulx.

James Calado and Alessandro Pier Guidi took a consolation fourth place for Ferrari in the #51 488 GTE, having also suffered a puncture just before the first-hour safety car and dropping to the rear of the class field.

Aston Martin again failed to convert its qualifying promise into a strong race result, with its pair of Vantage GTEs both dropping down after being caught out by the early safety car and ending up seventh and ninth.

Porsche made it a clean sweep of wins in GTE as Project 1 claimed its first-ever Am class win in the WEC.

Jorg Bergmeister, Egidio Perfetti and Patrick Lindsey came through a chaotic encounter to take honours ahead of the #88 Dempsey-Proton Porsche shared by Matteo Cairoli, Satoshi Hoshino and Giorgio Roda.

Cairoli caught and passed the #90 TF Sport Aston Martin in the final half-hour to take second, although the #88 car had held a sizeable advantage at the head of the class until Roda's stint.

UPDATE: The #88 Dempsey-Proton Porsche was awarded a post-race penalty of 31 seconds for failing to complete the minimum refuelling time, dropping Cairoli, Hoshino and Roda from second to fifth.

TF Sport moves up to second in class, while the factory #98 Aston Martin entry takes the final podium spot.