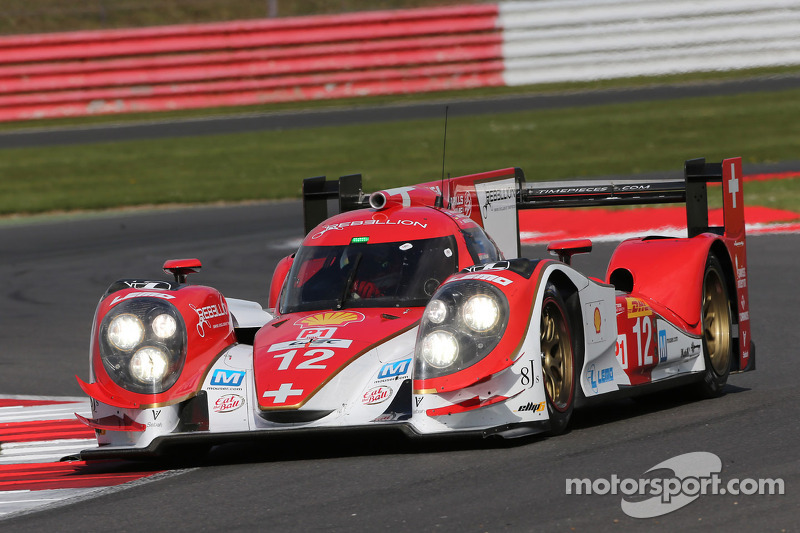 From now, Rebellion Racing will focus all their attention on the new R-One cars for a new era for the team.

For the first round of the 2014 World Endurance Championship, Nicolas Prost, Nick Heidfeld and Mathias Beche with the Lola-Toyota #12 car secured fourth place overall at the 6 Hours of Silverstone, and first place of the LM P1-L category, scoring maximum points for the Rebellion Racing team in the championship.

Starting from eighth position on the grid, just behind the sister car #13, Nick Heidfeld drove fantastically well. For more than three hours and thirty minutes Nick avoided every trap of the British race track, showers, greasy corners, traffic … , driving safely and quickly stint after stint supported his pit team and his Michelin tyres.

Some of the other front-runners in the race weren't so lucky...


Taking advantage of a safety-car period due to a crash of the factory Audi #2, Nick was called to pit and handed over the driving to Nicolas Prost. From that stage, the Lola-Toyota was holding a strong fourth position overall. After a trouble free double stint from the French driver, Mathias Beche took over from his teammate in the car to finish the race.

For safety reasons, the race was red-flagged twenty-six minutes before the 6 hour mark after heavy rain hit the Silverstone circuit causing a shortening of the opening round of the 2014 FIA World Endurance Championship.

The sister car # 13 had an undeserved premature end to its race. Starting in 7th position, Andrea Belicchi had to stop to the pit after only 24 laps. The Lola-Rebellion was pulled back into the garage and after inspection of the gearbox, the team was forced to retire the car from the race.

The great result for the Lola-Toyota #12 in today's race was a fitting finale for the Lola Coupé that has served so well the Swiss team since 2008; the 2014 FIA WEC 6 Hours of Silverstone will be its last outing.

From now, Rebellion Racing will focus all their attention on the new R-One cars for a new era for the team.

Nick Heidfeld – Lola-Toyota #12 : “ The start of the race was a bit strange for me because a car did not kept its line and we had to go through the first two turns two out of sequence. After that though, everything was ok. I couldn't pass Andrea so I settled into my position. It's a shame that the #13 had a gearbox problem because I'm sure that they would have had a good result too. After the start, the weather was changing nearly every lap. I think it was my longest stint in the car since I drive for REBELLION. It was good fun, very enjoyable. I look forward to next week for the testing of the R-One ! ”

Nicolas Prost – Lola-Toyota #12 : “ We have collected a lot of good results with the Lola cars and it's nice to finish with a better result than in Bahrain at the end of the 2013 season. We knew that we had to make no mistakes and expected that the factory cars would make some and that's exactly what happened. What we need now is a modern, brand new car to face the challenges of the new regulations. But this race at Silverstone has shown us that in changing conditions, without four wheel drive, it will be hard for us to follow the factory cars. We will now focus all our attention on testing the new R-One. ”

Mathias Beche – Lola-Toyota #12 : “ I'd like to congratulate my teammates Nick and Nico for their fantastic driving. Keeping the car on the track, they allowed me to take the chequered flag. I took the car at the start of a new rain shower. My goal at that moment was to keep the car in the race and to collect information on fuel consumption to prepare the next step. Compared to the factory cars, driving in these weather conditions with wider tyres and no hybrid system was a disadvantage. But we did it. It was a stint of just waiting for me. For sure, not the the most fun, but with a good result at the end. ”

Andrea Belicchi – Lola-Toyota #13 : “ The start of the race was good. I was in front of the #12 and I had good pace. After 40 minutes, I started to smell oil in the car and I realized that we were facing some trouble. 3 laps later, the transmission failed and I had to ride the clutch to get the car back to the box. As it would take too long to rebuilt the gearbox, we had no other choice than to retire. Anyway, if the result is not here today, I'm really happy with my two new teammates Fabio and Dominik. We have good potential ! I can't wait to be at Spa for the next round with our new R-One. ”

Dominik Kraihamer – Lola-Toyota #13 : “ It's a pity to have not taken the wheel of the Lola-Toyota during the race. But I'm delighted with the weekend. During the quali, Fabio and I have shown that we will be able to create a surprise in front of the sister car #12. We have still a lot to learn but I'll keep a good memory of this qualifying session. It will stay as my last driving time in the Lola-Toyota. A great feeling ! We will now 100% focus on the new R-One car. I'm happy to be part of its development from the begining. We'll have all to give our input to make it evolve. It's a new adventure that is starting ! ”

Fabio Leimer – Lola-Toyota #13 : “ The weekend was really positive until we broke the gearbox 45 minutes after the start of the race. Of course, I'm disappointed because I'd like to drive during the race and to improve my driving in race conditions. I'll have to wait until Spa to have new information to help me to improve my driving style. I've seen this week-end that I'm on the pace. I stay motivated and looking forward to Spa. ”

Bart Hayden – Rebellion Racing Team Manager : “ We went to Silverstone with the desire to secure a better achievement with our two Lolas than we did at the final race in Bahrain last season. And here we achieved that aim! From the start of the new R-One project, our team has been split working hard between the development of the new cars and the beginning of the season. This good result closes with glory our Lola chapter. It is a good result for all the crew and for the partners that have been with us since the start. All the team can now focus their energy on the R-One project. We have a lot of work to do, but we are all determined and motivated. ”

One-two for Toyota Racing at Silverstone