Finishing second Sunday in the P2 category at a thrilling Six Hours of Fuji in Japan, the Florida-based Starworks team clinched the 2012 P2 teams title in the FIA World Endurance Championship, the first world championship in the 19-year history of Honda Performance Development. 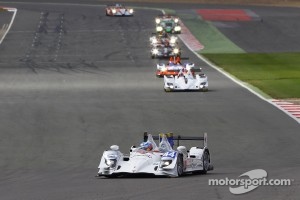 The Honda-powered HPD-03b crossed the finish line almost a minute ahead of the third-place finishing OAK Racing Morgan Nissan, but more important, three positions ahead of the Pecom Racing Oreca 03 Nissan, the closest competitor to Starworks for the P2 title.

The result clinched the championship for Starworks with one race remaining, and caps a year that also saw the team win the P2 class at the 12 Hours of Sebring, 24 Hours of Le Mans and Six Hours of Sao Paulo in its first year of world championship competition.

In the P1 category, the British-based JRM team had its strongest outing of 2012, finishing fifth overall and second in the privateer category for independent teams in its HPD ARX-03a.

The World Endurance Championship now heads to China for the season-ending Six Hours of Shanghai on October 27.

Ryan Dalziel (#44 Starworks HPD ARX-03b) finished 9th overall and 2nd in P2 to clinch the P2 Teams’ Championship in the FIA World Endurance Championship, the first world title for Honda Performance Development: “It will probably take a little while for our Championship win to sink in.

It was a program that I felt kept getting stronger and stronger. When you look at the results we have had, it is incredible that a first-year team with no experience in motorsports outside of North America – and with engineers that had never been outside America – could come here and do this.

It all comes down to having the right people in place. We took the decision in going for the Honda HPD chassis, then the Dunlop tires worked really well with the car.

A lot of our success came from having a reliable car, not necessarily the fastest car. It is incredible to put your name next to a world championship.

Winning the World Championship caps a season where we also won the P2 class at the Sebring 12-hour race and at the 24 Hours of Le Mans.

This accomplishment is a result of hard work by everyone at HPD, our technical partners at Wirth Research and Dunlop, and the Starworks team that put trust in our associates and our products.

The P2 field in this year’s World Endurance Championship was a very competitive one. Despite fielding just a single entry in the class, we were able to come out on top in all of the key races, and now the championship.

Clinching the championship here in Japan was also nice icing on the cake, as it allowed Honda fans and associates to savor the victory alongside our partners. There is still one race left in the WEC season, so let's do our best to end it with another success in Shanghai.”

Victory for Porsche and Corvette in Japan

Sato, Malukas put their pace down to great teamwork at Coyne