The car with the Italian livery is established itself in the lead of the championship: two months later the great victory in the “Le Mans 24 Hours 2012”, there is this first place at Silverstone. 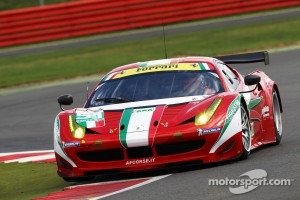 Thanks to the very fast stints of both drivers, the reliability of the Ferrari and the perfect strategy of the team, the 458 Italia # 51 AF Corse ran a perfect race from start to finish. And the success is double.

The Italian-British trio ran a very concrete race until the chequered flag.

The AF Corse Ferrari 458 Italia GT2 #71 – at the wheel Andrea Bertolini and Olivier Beretta – ended in the fifth place among the GTE Pro cars. There is a bit of regret: during the fight for the podiums, when there were only three bends to the chequered flag, the car was the victim of misconduct of a competitor and off the track

In the standing, Ferrari is leading among the GT Manufacture with 197 points (Porsche is second with 102). AF Corse is leading the Team standing with 118 points and a wide gap (Aston Martin Racing has 63 points).

Giancarlo Fisichella: “It was a great race and it’s a fantastic feeling following on from Le Mans 24 Hours. We won here last year and the championship so we’re good on this type of circuit. As usual it was a tough race but it was one we could control from the beginning, keeping close to the Porsche and Aston Martin. The AF Corse guys did a fantastic job, they were very quick”.

Gianmaria Bruni: “In the race we were able to follow the Porsche as close as possible until we got into LMP traffic. The Aston was coming up on us very fast and managed to overtake me and the Porsche. Our strategy was to try and be at the same speed as them but at the same time use less fuel. That was our plan and I think we achieved it 100%”.

Piergiuseppe Perrazini: “In my second race in the world championship there is a great victory. After the big crash at the 24 hours, there was a lot of discussion about me and the victory is very important. Now this is the greatest satisfaction for me and the team because I had a bad period after that crash.”

Marco Cioci: “It was a good battle and we had the same strategy as the No.51 car. We tried to save fuel but it was hard at the beginning as the Aston Martin and Porsche were very quick. Our strategy was to be as quick as possible and save one pit stop. Piergiuseppe Perrazini was great and saved more fuel than anybody – Matt did an incredible double stint and saved fuel. The car was perfect”.

Matt Griffin: “We had good pace in the car and we realised we were very good on fuel like the other AF Corse Ferrari. The WEC races are hard and the drivers are good so to win them you need every piece of the puzzle to fit into place – the team and the drivers to do the maximum job and today we did that. I’m chuffed to win at Silverstone”.

Signatech-Nissan on the podium at Silverstone