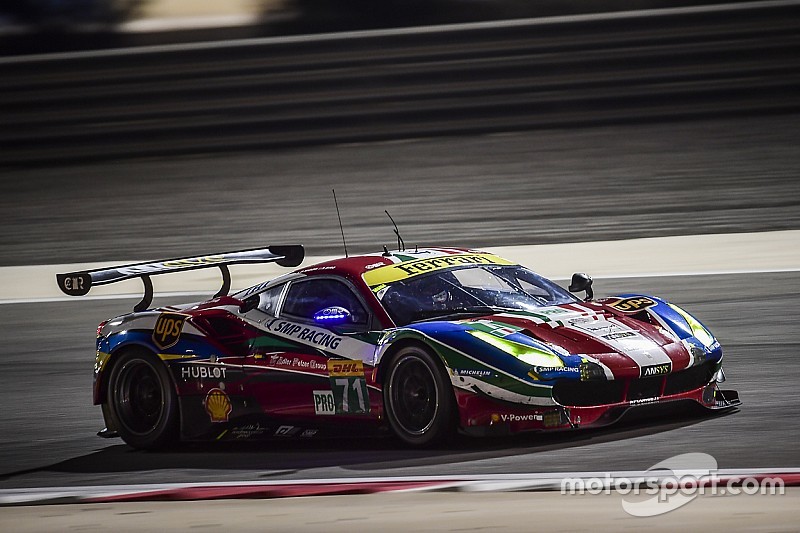 Ferrari GT Racing director Antonello Coletta has argued that the Italian marque’s Balance of Performance did not allow it to fairly fight for the FIA WEC GTE-Pro class drivers' title with Aston Martin.

The AF Corse squad took three wins in 2016, triumphing at Silverstone, Spa and the Nurburgring, but the better placed of its 488 GTE cars, the #71 of Sam Bird and Davide Rigon, lost out on the drivers’ title in Bahrain to the #95 Aston duo, Nicki Thiim and Marco Sorensen.

Ferrari nonetheless came away with the manufacturers’ title, albeit only after Aston Martin lost a chance of taking one-two finish when the #97 Vantage of Darren Turner and Jonathan Adam lost a wheel at mid-distance.

Coletta said that Ferrari’s failure to challenge Aston Martin in the season finale can be traced to a Balance of Performance (BoP) he feels that made the British-built cars unbeatable.

“It was a very difficult season,” Coletta told Motorsport.com. “In the first races our speed was not clear, because some of our rivals were hiding something. Then we left Le Mans having scored nothing.

“After that, Ferrari never had a BoP that allowed us to fight on equal terms. At the Nurburgring we won, but this was more down to strategy than speed.

“The other races have been a real tragedy. Even though we arrived in Bahrain with 10 points [more than Aston Martin in the manufacturers' standings], we did not expect to win the title.

“It was not possible for anyone to beat the Aston [in Bahrain]. I spoke to an LMP2 driver and he told me he could not pass the Aston along the straight when he had to lap them.”

Coletta also warned of a rising trend in the GTE ranks of manufacturers entering cars designed first and foremost for racing, rather than converting an established road car into a race-eligible machine.

He said championship organisers should impose "very strict rules" that are "equal for everyone".

The Italian’s remarks are clearly aimed at the Ford GT, which was allowed into the championship this season despite production having yet to commence on the American supercar, while Porsche is re-entering the class as a works team in 2017 with a mid-engined 911 RSR not directly derived from a road car.

“We have read the rules, we have interpreted,” said Coletta. “Using the base of our 488 road car we started our work, making it competitive for racing.

“Others have made prototypes, and today we are still waiting to see the minimum number of road cars being produced. Others have said they have made a car you will never see on the road.

“Something is not working. It’s time to sit around the table and establish a set of very strict rules. It’s good to have new manufacturers, but the rules must be equal for everyone.

"It is clear we cannot remain passive when others arrive with cars that are distorted or are very different to how they should be.”