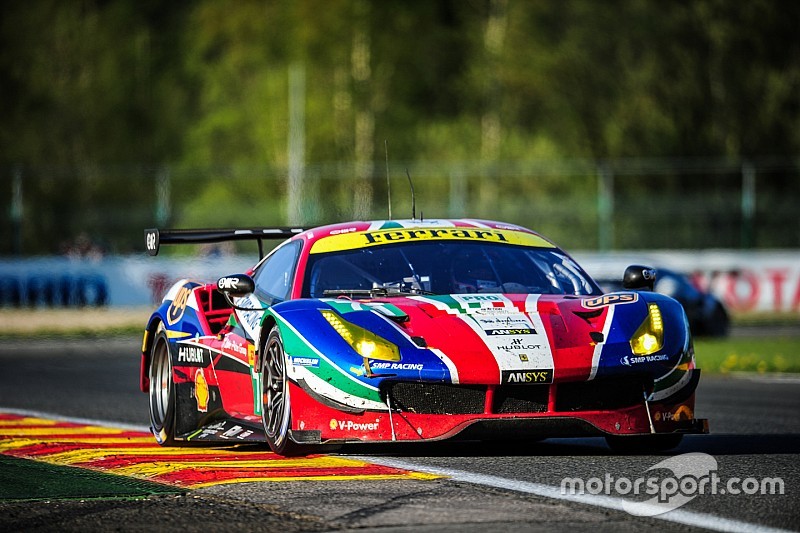 Francorchamps – Second success in a row for the No. 71 AF Corse Ferrari 488 GTE of Sam Bird e Davide Rigon, winners of the 6 Hours of Spa-Francorchamps, second round of the World Endurance Championship (WEC), the last race before the 24 Hours of Le Mans scheduled for mid-June.

Bad luck for car No. 51, of Gianmaria “Gimmi” Bruni and James Calado, that was stopped by a technical issue while leading with only ten minutes remaining in the race. It was a tricky afternoon also for the 458 Italia of François Perrodo, Emmanuel Collard and Rui Aguas, racing in the GTE-Am class. The car was penalised with two drive-throughs but still finished second.

In the GTE-Pro class the race kicked off with Bird in car no. 71 starting from pole and Bruni in no. 51 beside him. The Italian made a better start to take first place but Bird initially kept pace with Bruni. Then, partly because of the traffic, Sam went wide at Pouhon corner and lost a total of eight seconds. The first pit stop with driver change took place under Full Course Yellow, with all cars restricted to 80 km/h following a frightening but thankfully harmless accident for Aston Martin's Nicki Thiim, while an episode at the second stop seemed to be the key of the race.

Debris on the track again called for a Full Course Yellow and both cars returned for their pit stops. But while Calado handed over to Bruni under the yellow flag, Rigon swapped with Bird when the race was back under the green flag. As a result no. 71 found itself almost 30 seconds behind no. 51. Then, with only ten minutes remaining in the race, a technical issue hit the 51 car obliging James Calado to retire in the garage. Bird and Rigon won in front of the Ford of FranchittiPriaulx-Tinknell and the Aston Martin of Rees-Adam-Stanaway.

The only Ferrari in the GTE-Am class, the AF Corse No. 83 458 Italia of Emmanuel Collard, François Perrodo and Rui Aguas, had a difficult afternoon but secured an important second place for the championship. The winner was the Aston Martin of Lamy-Lauda-Dalla Lana but the drivers of car no. 83 received two drive-through penalties for exceeding track limits. Without those they would have been in with a chance of victory. The overall race was won by the Audi of Jarvis-Di Grassi-Duval. The next meeting is the most anticipated, the 24 Hours of Le Mans on 18-19 June.