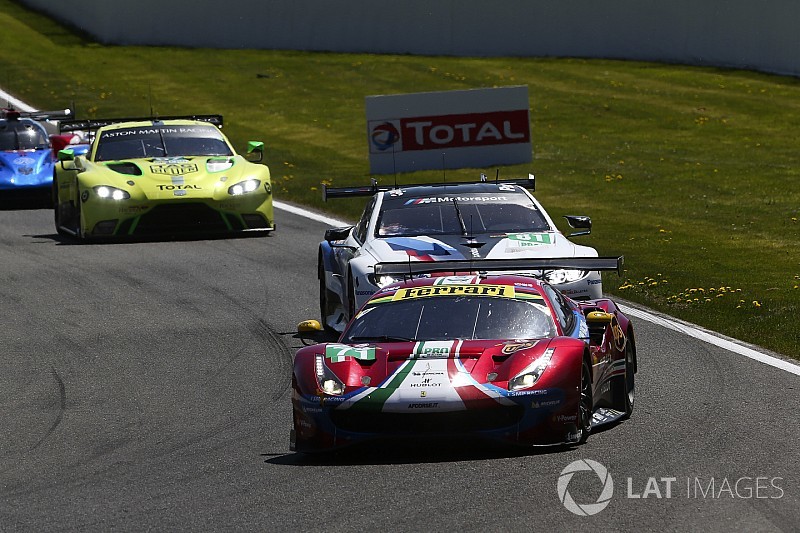 Rigon and co-driver Sam Bird finished a distant third in the #71 AF Corse Ferrari 488 GTE, a lap behind the victorious Ford GT of Stefan Mucke, Olivier Pla and Billy Johnson and the second-placed Porsche 911 RSR of Michael Christensen and Kevin Estre.

It came after a late safety car bunched up the field and allowed Rigon to go on the attack against the ailing #91 Porsche of Richard Lietz, who was struggling on a set of worn tyres.

Rigon made a forceful pass on Lietz at the Bus Stop chicane in the closing stages to finally secure what he admitted was a fortuitous podium finish.

"The podium only came thanks to the safety car and a perfect strategy," Rigon said post-race. "We can't delude ourselves.

"We chose to fit the hardest tyre because we knew our only chance would be in the second part of the race, by double-stinting. At the start it was very hard, we suffered a lot.

"We started on used tyres but we managed to stay with the group. We saved new tyres for the end, we went to catch up the Porsche and I passed.

"It wasn't easy because Lietz had better straightline speed than me. More than once I drew alongside him, I overtook him on acceleration because I had better tyres but then he recovered the position.

"I'm sorry to have used such bad banners to pass Lietz, as he's a great driver and a friend. But at that point I could not do otherwise."

Rigon echoed his Ferrari bosses by calling for a reset of the GTE Pro Balance of Performance before the next six-hour WEC race at Silverstone in August.

He said: "I hope that the FIA and the ACO can rebalance things because Ford and Porsche were too fast for us, BMW, which has a good engine but struggles in the corners, and Aston Martin.

"Our race pace is great but it's not enough to aim for the victory."

The sister #51 Ferrari of James Calado and Alessandro Pier Guidi was eliminated from contention in a pitlane incident with the GTE Am class Project 1 Porsche.

Toyota expected privateers to be closer at Spa