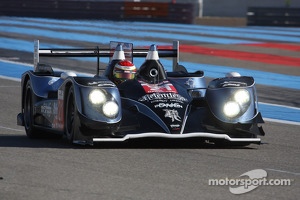 It was the first time the Silverstone-based team had run its upgraded 2013 spec. LMP1 car at a race track, and was encouraged with the progress it made in understanding the Relentless Energy Drinks-backed car’s new wider front Michelin tyres, front suspension geometry, steering configuration and front aero package.

The team will now analyse the technical data and driver feedback to be the best prepared it can be for the opening round of the series, the 6 Hours of Silverstone, on Sunday 14 April.

Nick Leventis: “It’s been a really good test. We’ve been slightly hindered by the weather – we had a long list of items to run through and we still got through a lot of it considering we lost two mornings worth of running.

We’ve got a good understanding of the car and we’re looking in good shape for the first race of the season. Personally I spent a lot of the second day in the car, running through a check list and ticking most of the boxes.

As a team, we never really went for a fast lap time, and we’re happy we’ve got a good fast and safe car to go racing with.”

Jonny Kane: “We were a bit unlucky with the weather, yet it’s still been a very productive two days test for us. We had a massive test programme that we wanted to get through, to learn about the new front of the car, and the weather limited that a little.

We still got through quite a lot of stuff and we’ve got good direction to go and battle with Rebellion, who are a little bit ahead of us, having run this spec. of car all of last year and also at Sebring this year.

The upgraded HPD ARX-03c is the same to drive as last year’s 03a, because you’re still looking for the same feeling from it; it’s just that you have to change the set-up slightly to achieve that – and that’s what we’ve been working on over the last two days.

Towards the end of the test we had a very good run and I’m really looking forward to Silverstone.”

Danny Watts: “The first test of the season with the new front end has been pretty productive. We’ve got a lot of good work done and we’ve learnt a lot, but we didn’t get as much running time as we wanted because of the poor weather.

We certainly made progress and we’ve got some good ideas to think about before Silverstone. From a driver’s perspective, the new car isn’t any different to drive than last year’s car, it’s more about getting the set-up dialled in to that new front end.”

Dan Walmsley, Strakka Racing Team Manager: “This test was not about going fast at Paul Ricard, it was about getting ready for the new season – and in that respect we achieved a lot. With our upgrades and moving to the new specification Michelin tyre, we really wanted to maximise our track time.

We were a little frustrated with the weather, but we at least got some good afternoon running both days and that’s given us a lot of data to analyse.

We’ve learnt a lot of interesting things that will help us with our set up direction for the rest of the year, we got all three drivers through the test without a hitch and we had no reliability issues whatsoever, so we’re in good shape.

Ultimately it was a successful test. The car’s easy to drive, reliable and consistent – we just need to unlock a tenth or two more of its potential and we’ll be extremely competitive.”