Encouraging start for the Ford GTs at Silverstone 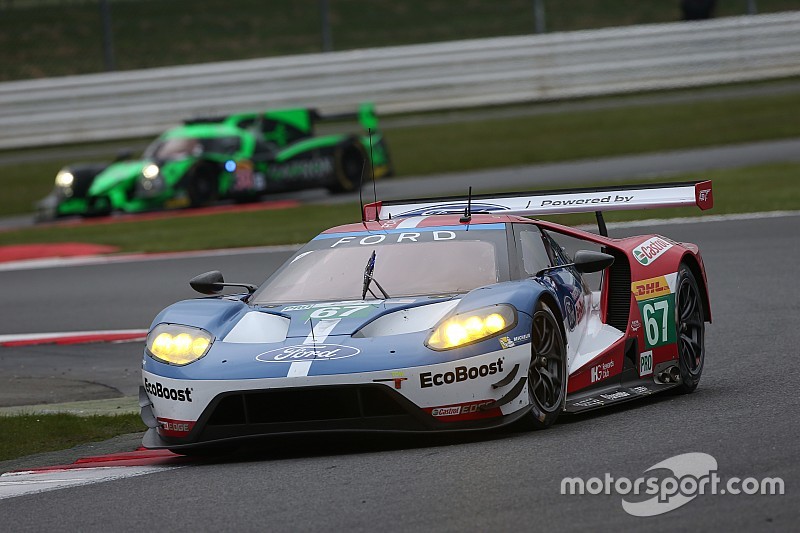 The 6 Hours of Silverstone gets underway tomorrow (Sunday) at 12:00hrs BST

Today’s qualifying session for the ‘6 Hours of Silverstone’ produced an encouraging result for the Ford Chip Ganassi Racing team. The #66 Ford GT took third place in the GTE Pro class, followed by the #67 Ford GT in fourth position.

The morning warm-up session had to be cancelled when a snowstorm blew through before qualifying began, leaving behind a cold and wet Silverstone. Both Ford GTs remained on wet tyres throughout the session.

Stefan Mücke was behind the wheel of the #66 Ford GT at the start of qualifying and immediately put in a strong lap time before handing the car over to Olivier Pla. The grid positions for the FIA World Endurance Championship are decided by taking the average of each of the qualifying driver’s best lap times so it is vital for both drivers to deliver when it counts. There was a tense moment when Pla went straight on at Stowe but he quickly recovered to take third place.

“I was feeling a little nervous before qualifying,” said Pla. “This was the first time I drove the Ford GT in the wet so I had no experience to go on. I think we can be pleased with third place and we can certainly have a good race from there.”

Andy Priaulx was out first in the #67 Ford GT but suffered from a gear selection issue that only surfaced during the qualifying session. Despite that he and Harry Tincknell’s efforts were rewarded with fourth place in the GTE Pro class.

“Considering we only had third and fourth gear during qualifying that was a good result,” said Tincknell. “I’ve never done a qualifying lap quite like that one! Obviously we want to be higher up but I think we can be very encouraged by today’s result.”

“Today was a good first outing for the WEC Ford GTs,” said Ford Performance global director Dave Pericak. “The result for #66 was very encouraging. The issue was #67 was a bit of a surprise but we’ll diagnose it quickly and make sure everything is right for tomorrow’s race.”