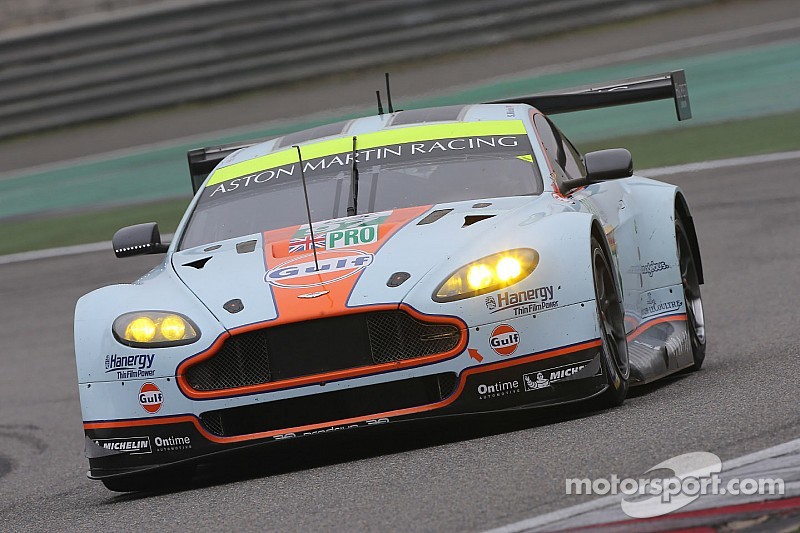 Stefan Mücke and Darren Turner took the pole position in the GTE Pro class and Pedro Lamy and Christoffer Nygaard did the same in the the GTE Am class.

Shanghai - Aston Martin Racing took pole position in both of the FIA World Endurance Championship’s (WEC) GT classes earlier today (Saturday 1 November), for the sixth round of the 2014 season, the Six Hours of Shanghai.

In the GTE Pro class, Stefan Mücke (DE) was first out on track in the #97 Gulf-liveried V8 Vantage GTE and the 32-year old took no time in recording two fast laps of the Shanghai International Circuit.

“We’ve been strong here for the last two years but it wasn’t easy out there today,” commented Mücke. “We had to work really hard for it. It’s our first pole of the year, so it’s very important to us and the whole team should be proud.”

We have a lot of guests here in China and it’s great to get a pole position for them.

Next it was the turn of Darren Turner (GB), who, in line with the WEC regulations, needed to record two flying laps to be averaged with his German team-mate’s. Never one to disappoint, Turner took over the wheel and did just enough to clinch the pole position.

“It was very close,” commented Turner. “The gap to the second placed Porsche is only a tenth. Stefan did a great job, as always, and I’m really happy for everyone here at Aston Martin Racing. We have a lot of guests here in China and it’s great to get a pole position for them.”

In the GTE Am class, it was Pedro Lamy (PT) and Christoffer Nygaard (DN) who took part in the session to put the #98 Vantage GTE on class pole for tomorrow’s six-hour race.

Qualifying has been tough for us this year so we’re pleased to get another pole position and take that first one for the #97.

“This is the second pole position in a row for us and it’s great to be starting from the front,” commented Nygaard. “We are in second place in the championship behind our #95 sister car so we need to score as many points as we can this weekend in order to catch them.”

The WEC GTE Am championship-leading #95 Young Driver AMR Vantage GTE recorded the fastest lap of the GTE qualifying session with Richie Stanaway (NZ) behind the wheel. Team-mate David Heinemeier Hansson (DN) joined the young New Zealander and did an effective job to qualify the car in third place.

In the #99 Craft-Bamboo Racing Vantage GTE, it was Fernando Rees (BR) and Alex MacDowall (GB) who took part in the 20-minute qualifying. The team, which took pole position in Fuji three weeks ago, qualified in sixth place in the GTE Pro class in its INTERUSH-liveried machine.

“It’s good to be starting from the front of the grid in both classes,” commented Team Principal John Gaw. “Qualifying has been tough for us this year so we’re pleased to get another pole position and take that first one for the #97. Darren and Stefan have been winners here in the past and the track suits our car so, hopefully, with a lot of hard work, we can turn it into our third GTE Pro win here in three years in tomorrow’s race.”