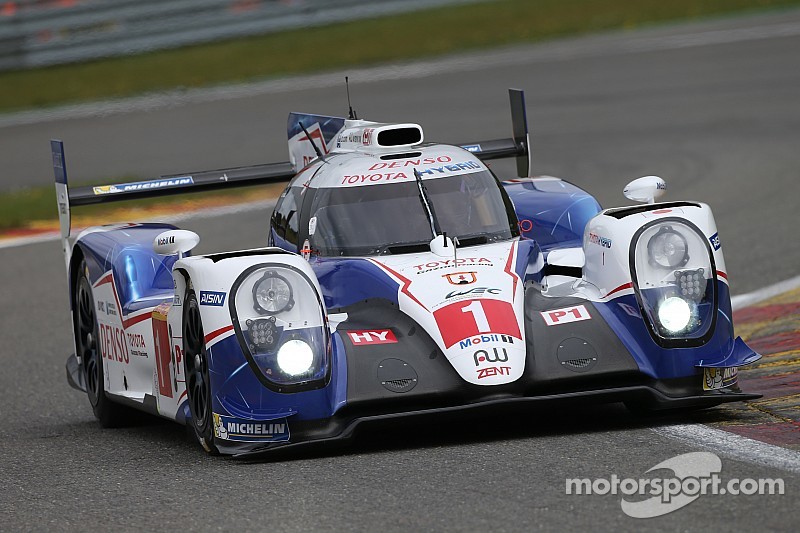 TOYOTA GAZOO Racing will start the second round of the World Endurance Championship from sixth and seventh after a dissatisfying qualifying session for the Six Hours of Spa-Francorchamps in Belgium today.

World Champions Anthony Davidson and Sébastien Buemi, racing alone in the #1 TS040 HYBRID after Kazuki Nakajima was hurt in a practice accident, took sixth on the grid in today’s 25-minute qualifying.

The #2 car of Alex Wurz, Stéphane Sarrazin and Mike Conway was one place further back, leaving the team determined to achieve a better result in the race.

Unfortunately it has been a difficult day for us in qualifying.

As a result of Kazuki’s accident yesterday, the #1 crew worked extremely hard to change the monocoque in time for today’s action, giving Anthony and Sébastien the chance to prepare for qualifying during final practice earlier this afternoon.

With yesterday’s two sessions both taking place in heavy rain, the team had no information about dry-weather set-up at Spa so had a busy final practice to get ready for qualifying and the race.

Qualifying began with overcast skies and mild temperatures. Anthony and Mike were at the wheel of the #1 and #2 before handing over to Sébastien and Stéphane respectively for their flying laps.

A relatively uneventful, and disappointing, session for TOYOTA saw both cars complete their runs a few minutes before the chequered flag, with the #1 lying 2.720secs off pole and #2 sitting 3.162secs behind on average.

Away from the track, Kazuki remains in hospital in Verviers recovering from the fractured vertebra sustained in yesterday’s high-speed accident. All drivers and most team members have visited him and found him to be in good spirits, with a keen focus on the events at Spa and a determination to return as soon as possible.

Anthony Davidson: “First of all a big thanks to the mechanics for their hard work in swapping to the spare chassis. Unfortunately it has been a difficult day for us in qualifying. We did the best we could in terms of set-up and the car felt good, so I’m disappointed by the lap times. Tomorrow is a different day. Last year we missed out on pole by quite a margin and still won the race. We’ll see how tomorrow unfolds but right now it hurts.”

Sébastien Buemi: “We did the best we could and we will see what tomorrow brings; there is not much more to say. We were slower in qualifying than the competition which is not a surprise, but we are further away than expected. Regardless of the disappointment, I want to say thank you to the crew who put in a huge effort to change to the back-up monocoque. Let’s see what we can do with it tomorrow.”

Stéphane Sarrazin: “Qualifying was difficult, particularly because I had traffic on two of my flying laps. I hope we can have a good race and move up the order; we will see. We want to score big points but we need a good strategy to improve our position. We are very good on our tyres so degradation could make a difference. We’ll stay positive and do our best in the race.”

Mike Conway: “Obviously there is quite a big gap to the others which is disappointing. I didn’t put my best lap together and left too much on the table. There was more lap time to be gained but ultimately I don’t think it would have changed much in terms of the positions. I don’t know what to expect tomorrow; we’ll fight hard and maybe the weather can do us a favour.”

Another pole for the Ligier JS P2 at the 6 Hours of Spa!