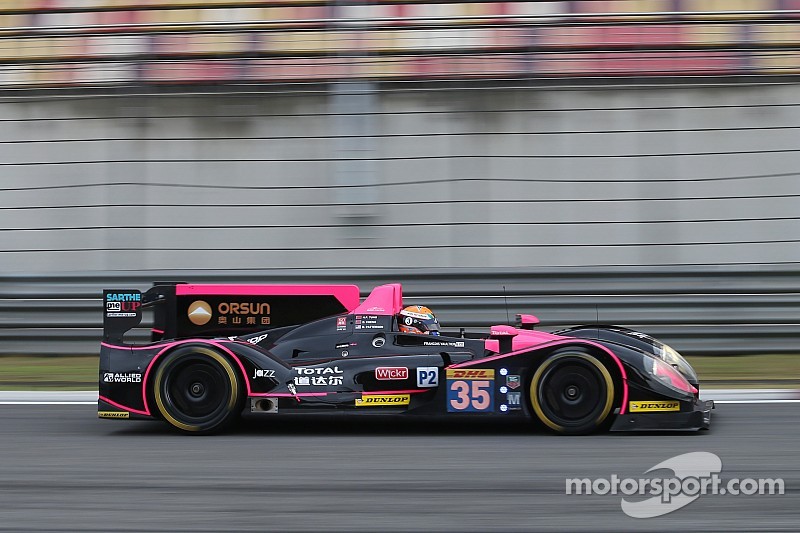 Chinese duo Ho-Pin Tung and David Cheng were joined for this second home race by the American Mark Patterson.

Having finished on the podium at the FIA World Endurance Championship round in Fuji, the #35 Morgan-Judd LM P2 was entered again by OAK Racing this week-end for the 6 Hours of Shanghai. Chinese duo Ho-Pin Tung and David Cheng, recently winners in the Asian Le Mans Series with OAK Racing Team Total here in Shanghai a few weeks ago, were joined for this second home race by the American Mark Patterson in the #35 OAK Racing Morgan-Judd LM P2, shod on Dunlop tyres.

With such assets, the team and the drivers were heading to this race in high spirits: the performance, making it to the end, the consistency and the mechanical reliability were all present, but due to issues with the balance of the brakes, the team only managed to come away with a LM P2 sixth place finish.

We are very pleased to have been able to take part in this WEC race with our two drivers from the Asian Le Mans Series, who have already been crowned champions...

It was hard to find the rhythm this weekend, with the Chinese duo only managing to qualify seventh on the grid. Heavy fog and rain in the free practice sessions got in the way of working on their set-up for the weekend, and then traffic in qualifying also disrupted their chances of setting the lap times they wanted.

Ho-Pin Tung was first in the #35 Morgan-Judd LM P2. After the safety car at the start of the race, due to a crash between a Ferrari and the KCMG Oreca-Nissan LM P2, Ho-Pin Tung avoided any damage and got a good start. He was consistent and stayed out of trouble. After a good pit stop halfway through his double stint, he managed to overtake the #37 SMP Racing Oreca-Nissan, but lost that place just before handing over to Mark Patterson.

Although a lap down from the LM P2 field, the American driver didn’t lose any time and was quite consistent in his double stint. After one and a half hours of incident free racing, he handed over to David Cheng.

David Cheng tried to improve on the pace of the #35 OAK Racing Morgan-Judd LM P2. He worked on reducing the gap to his nearest rival, although gaining a position would be very hard at this point.

In the second half of his stint, the car became difficult to manoeuver and when David handed the wheel over to Ho-Pin, it was almost impossible to drive, because it had developed an issue with the distribution of the balance of the brakes. As a safety measure, the team made the Chinese driver pit again, and after a turnaround in the garage to fix the problem, he took the Morgan-Judd LM P2 back out onto the track.

25 minutes later, he came back to the pits for a second time, and this time, the problem was solved. Although he was setting similar lap times to his rivals in LM P2, Ho Pin Tung could not catch up to the field and ended the race sixth in class.

Although it has been a disappointing weekend for the OAK Racing team, the other Onroak Automotive car, the #26 G-Drive Racing Ligier JS P2, scored another LM P2 victory, with the trio of Roman Rusinov, Olivier Pla and Julien Canal at the wheel.

Ho-Pin Tung: " It was a very difficult race for us. From the beginning, we struggled a bit with the general grip of the car. About mid-race, we had an issue with the brake balance, which was slowly shifting to the front, and it became worse when I was in the car. We had such trouble with it that it became virtually impossible to drive the car. For safety reasons, the team decided to pit me twice, to try and fix the problem, which worked out well, so we could take the finish, which in the end, is always the first target of an endurance race. However, we came here with different expectations. It was a shame, but that’s racing. "

David Cheng: " It’s been a really tough weekend here in Shanghai. It’s not really how I imagined our home race would be. It was really difficult adjusting to the tyres from the start of the weekend. Also, not having much WEC experience put us on the back-foot. The weather didn’t help when it came to practice. I don’t think that Ho-Pin and I ran more than ten laps in the dry before the race, so we never got a chance to set up the car properly. Going into the race, was just really tough. Ho-Pin had a good opening stint and Mark did a good job to keep it there. A few laps into my stint, the brakes started overheating, and we just had to conserve the brakes and get the car to the finish. The team did a really good job to solve all the problems. The OAK Racing team always does a really good job! "

Mark Patterson: " For me, the car was great to drive. I didn't have any mechanical issues at all. Later in the race, we unfortunately had some front brake problems, which were finally fixed. I love the car to drive here. Good drivers, good team, it’s been a lot of fun. I really enjoyed it. "

Jacques Nicolet, OAK Racing President: " We have some reasons to be satisfied, and some to be a little less so. The performance, the consistency and the mechanical reliability were all present and made it to the end. Afterwards, we had a problem with the brake balance, which gave us abnormal temperatures, and that issue placed us last in LM P2.

We are very pleased to have been able to take part in this WEC race with our two drivers from the Asian Le Mans Series, who have already been crowned champions, and for whom it was important to race in front of their home crowds, but sadly, the result wasn’t what they had expected. Mark Patterson, who raced in the car for the first time, drove very well, and especially, was very happy to join the team and pleased with his adaptation to the car.

There is still Bahrain left to show off the car in a better light, after its great success in Fuji."