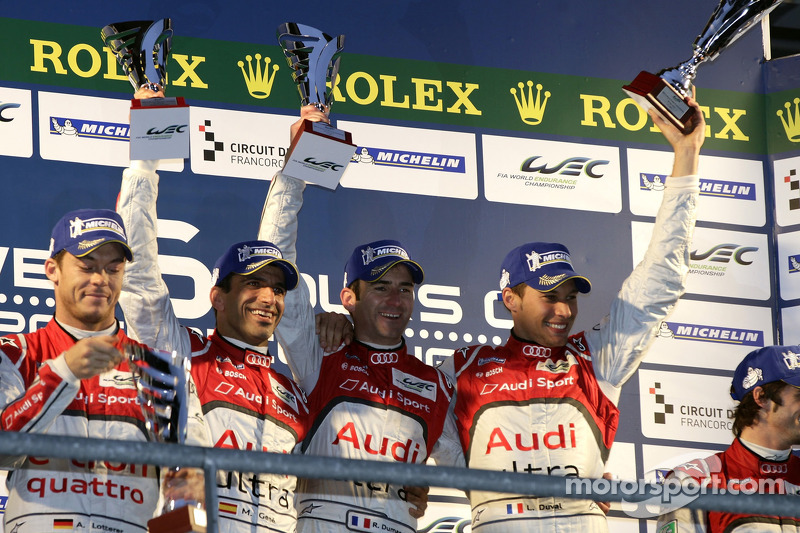 Audi debutante Marc Gene, along with 2012 newcomer Loic Duval and team stalwart Romain Dumas drove the #3 R18 Ultra TDI to victory in the second round of the FIA World Endurance Championship at Spa-Francorchamps. Much of the attention at the weekend was focused on the debut of the new hybrid R18 e-tron quattro, but the R18 Ultra was also in its first race, as it represents a significant revision of the 2011-spec R18 that won in Sebring.

Heavy rainfall on race morning ensured the early stages would be run on a wet track, but the expected race-long downpour did not materialise, leading to a rapidly drying track that proved crucial to the final outcome. Polesitter Tom Kristensen in the #2 hybrid lost the lead to a fast-starting Lotterer in the #1, who came from third to lead a hybrid 1-2 by the end of the first hour.

We didn't expect the Ultra would have such an advantage over the e-tron quattro in the dry.

Lotterer and his fellow 2011 Le Mans winners Benouit Treluyer and Marcel Fassler brought the hybrid R18 home in second on its debut, after the advantage of part-time four-wheel-drive in the wet gave way to the diesel R18's superior pace on a dry track in the third hour. It was Gene, initially bringing up the rear of the Audi train in fourth place at the wheel of the #3 car, who had the foresight to maximise that advantage by changing to dry-weather tyres before any of his team-mates.

“I told my engineer at the start that I wanted to try something different, as I know Spa always responds well when you go to a dry tyre early,” said Gene. “I asked for a tyre that we call an 'inter slick' – not quite a full slick – when everyone else was going to full inters.” Duval added: “We didn't expect the Ultra would have such an advantage over the e-tron quattro in the dry.” The Frenchman built up a comfortable lead before handing the car over to Romain Dumas for the final stint to take to the flag.

Sebring winners and Spa polesitters Kristensen, Allan McNish and Dindo Capello had a poor race. They were at a disadvantage from the first pitstops, when the car's front bodywork had to be changed to fix a faulty headlight, but also looked to struggle even more than the #1 car's drivers with the understeer that seems characteristic to the new hybrid R18. This allowed Audi young guns Marco Bonanomi and Oliver Jarvis to overhaul them for the final overall podium position.

Rebellion Racing's fifth and sixth place overall – a clean sweep of the unofficial 'petrol podium' – does not tell the full story of what was a very eventful race for the Anglo-Swiss team. The #13 entry, driven by the Andrea Belicchi/Harold Primat duo, was the quicker of the two cars in the early stages, but a mix-up that saw them drive straight through the pitlane, when they had in fact been given a stop-go penalty for jumping the start, wiped out their advantage. 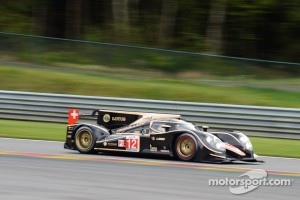 In the #12 car, Neel Jani initially fell back due to staying on wet tyres for too long, before handing over to Nick Heidfeld. The German had an entertaining battle with his fellow ex-F1 driver Sebastien Bourdais in the Pescarolo-Dome, which had looked like a challenger for fastest petrol when the track was drying but suffered mechanical trouble in the closing stages that required a 30-minute stay in the garage. Nicolas Prost then had a trouble-free run to the flag in his stint.

The expected challenge from the HPD teams failed to materialise, with the exception of a very strong early sting from Danny Watts in the Strakka Racing car, which eventually finished seventh in LMP1. The second HPD in the race had a more chequered afternoon, as Karun Chandhok spun the car while driving to the grid, putting them on the back foot all race. Consistent recovery drives from veterans David Brabham and Peter Dumbreck got the car back into the class top 10 at the end of the race. The OAK Racing LMP1 entry had an afternoon to forget, culminating in a suspension failure at the Bus Stop chicane with only minutes remaining.

Guest teams from the European Le Mans Series, racing in the WEC at Spa after the ELMS Zolder round was cancelled, were right in the mix today, culminating in a win for Britons Sam Hancock and Simon Dolan in their JOTA Sport Zytek Nissan. A 30-second stop/go penalty made their win less certain than it would otherwise have been in the closing stages, when a late splash-and-dash fuel stop demoted polesitters and long-time class leaders ADR-Delta to second. “I made a bad set-up decision after practice which made the car very difficult to control in the wet,” recalled Hancock, “but once it dried out and we went to cut slick tyres, the balance came back and the car was fantastic.”

Third in class went to JOTA's fellow ELMS team Murphy Prototypes, who also suffered a penalty in the early stages, but the pace and consistency of hot shoe Brendon Hartley and the experienced Warren Hughes in particular kept them in the hunt right the way through. Fourth-place P2 finishers Bas Leinders and David Heinemeir Hanssen had run as high as second during the race – testament to just how competitive the most closely-fought class of the day was.

Even with a modest five-car field, the GTE Pro class provided its customary entertainment at Spa. First polesitter Fred Makowiecki spun the #59 Luxury Racing Ferrari 458 on the formation lap, setting himself up for an aggressive recovery drive that saw him fighting hard with the AF Corse 458 of Gianmaria Bruni and Giancarlo Fisichella by the third hour. 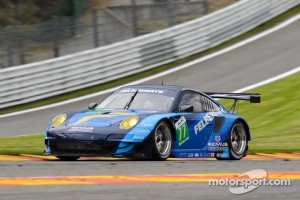 But in the meantime, fourth-place qualifier Marc Lieb had used the Felbermayr Porsche 911's superior traction in the wet to pull out an impressive lead before handing over to co-driver Richard Lietz for the second half of race. Yet the result would not be settled until the final corner, as the AF Corse Ferrari's strategy meant it needed one fewer pit stop than the Porsche.

“I never felt comfortable during the last one and a half stints, we had to double-stint the tyres and just take a splash of fuel at the end to stay ahead of them,” explained Leitz afterwards. Makowiecki and his Brazilian team-mate Melo ended up third – a reasonably strong end to a weekend where they showed they now have the pace to challenge benchmark Ferrari team AF Corse for race wins this season. There was intense disappointment for the works Aston Martin team, as Darren Turner had to retire the car early with a gearbox problem after showing class-leading pace.

Like LMP2, the GTE Am class at Spa was dominated by guesting ELMS teams. The French IMSA Performance Matmut squad led from start to finish as they got all-important mileage under their belt in preparation for Le Mans next month. Nicolas Armindo was particularly impressive in the wet first stint, but consistent mistake-free running from gentlemen drivers Raymond Narac and Anthony Pons. Gianluca Rodi, Christian Ried and Paolo Ruberti underlined the supremacy of the Porsche in damp conditons with second place in the #88 Felbermayr car, ahead of Matt Griffin, Marco Cioci

Despite the changeable conditions and challenging track, the race was free of major incidents – with one exception: Phillipe Haezebrouck crashed the #43 Extreme Limite Norma-Judd heavily at Eau Rouge, bringing the safety car out for several laps. The car was badly damaged and must now be considered doubtful for the Le Mans 24 Hours, opening up the possibility that the #32 Lotus that raced at Spa will be moved up from its place on the reserve list.