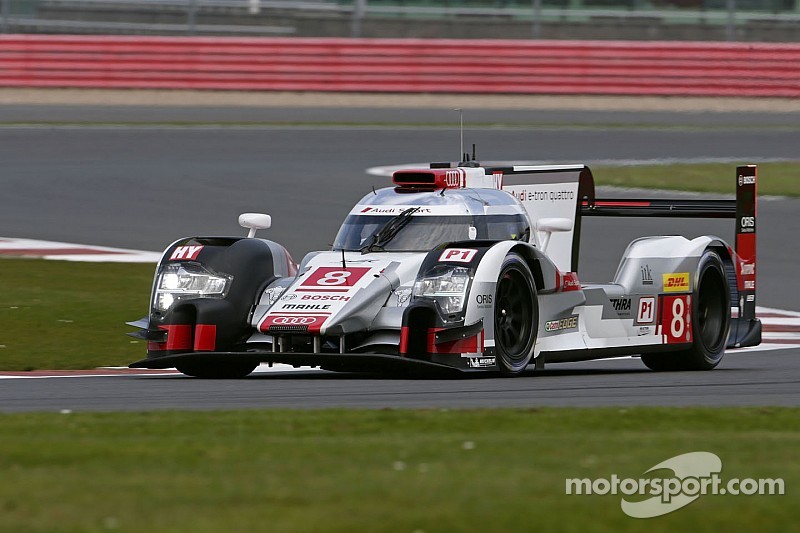 Lucas di Grassi set the pace for Audi in the first track action of the 2015 World Endurance Championship at Silverstone on Friday.

The second of the Audi R18 e-tron quattro entries driven by Andre Lotterer claimed third fastest with a 1:42.360.

Most of the times were set early on in the session. Only the late starting #18 Porsche 919 Hybrid driven by Neel Jani made an improvement in the final stages.

Reigning champion Toyota placed fifth and sixth after a quiet session. Alex Wurz was fastest early on in the session with a 1m42.749s in the #2 Toyota TS 040 HYBRID. The Austrian was 0.8s quicker than the #1 TS 040 HYBRID.

All of the top six LMP1 times easily beat the pole position time (1m42.774s) of 2014 indicating significant technical progress for the big three manufacturers in 2015.

LMP2 saw the G-Drive Racing branded team claim a one-two with its brace of Ligier JS P2 coupes. Gustavo Yacaman set a best of 1m50.213s to just outpace Sam Bird's best of 1m50.267s. The new ORECA 05 in the hands of Matt Howson was third.

G-Drive Racing was one-two in the LMP2 category with the all-Latin American crewed No.28 car of Gustavo Yacaman, Pipo Derani and Ricardo Gonzalez just outpacing the No.26 Ligier JS P2-Nissan with which Sam Bird set the fastest lap, just 0.054s.

The new ORECA 05-Nissan was third best with Matt Howson continuing his and the teams impressive form.

The No.95 Aston Martin Vantage V8 topped LMGTE Pro with Nicki Thiim setting the time early in the session.

Second in LMGTE Pro class was the #51 AF Corse Ferrari 458 Italia driven by Gimmi Bruni. The Italian set a 2m01.680s in the final moments of the session.

In LMGTE Am the Abu-Dhabi Proton Racing Porsche 911 RSR was best in class with rapid young German Klaus Bachler achieving the time of 2m02.350s.

Klien drafted into ByKolles for Silverstone