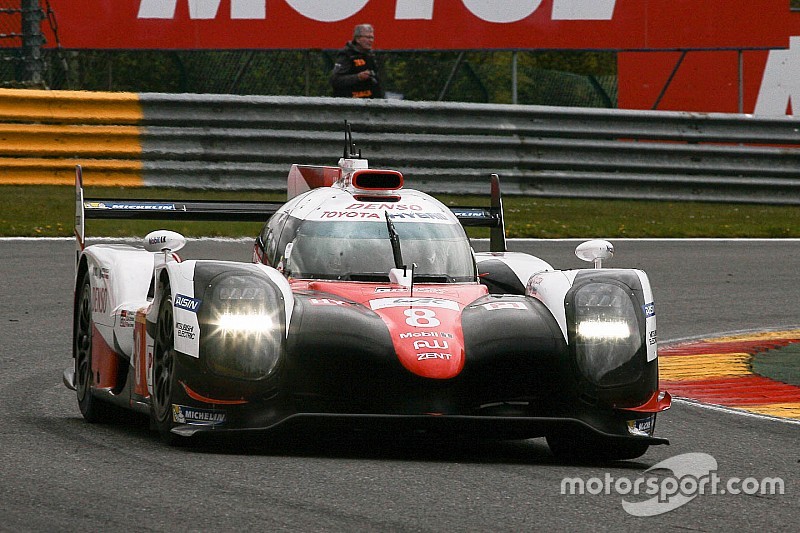 Toyota’s Anthony Davidson has urged his team to find an explanation of the large gap in pace between the squad’s two cars in last weekend’s WEC 6 Hours of Spa.

While Davidson and his teammates in the #8 TS050 Hybrid, Sebastien Buemi and Kazuki Nakajima, were victorious in last weekend’s Belgian race, they benefitted from two full-course yellow periods to take the lead away from the sister #7 car.

Buemi admitted afterwards that Mike Conway and Kamui Kobayashi in reality deserved to win, with Davidson admitting the two FCYs gave the #8 trio an advantage of around one minute.

But the British driver said post-race he was perplexed as to why the #7 Toyota appeared to have such a big advantage in pure speed terms, which he estimated was worth six to seven tenths of a second.

"Right from the word go, we’ve been six to seven tenths off," said Davidson. "They clearly had the better car, and that general trend was there all week.

"We could see we had bigger fuel cuts than them, and Seb [Buemi] said when he was watching car #7 in front of him it just looked like they had more power.

"If we drove their car, we’d have done the same laptimes – we always do in endurance testing, when we have nine drivers sharing the same car, and we’re all within a couple of tenths.

"We even copied their set-up in qualifying in desperation, and it was still six or seventh tenths. I lost four to five tenths over Mike [Conway] in free practice from Turn 1 to the top of the hill – and that’s flat-out!

"It’s been a real headscratcher. We saw last year with Porsche there was a big discrepancy between cars #1 and #2, but we’ve never had that before."

Toyota Motorsport vice-president Rob Leupen was unable to explain the #8 car’s deficit, and said the Japanese marque would have to get to the bottom of it before its next text at Spa at the end of May.

"We really have to analyse this, this is one of the major tasks we have before going to Le Mans and the next tests," Leupen told Motorsport.com.

"It’s a bit of a surprise there was such a big difference, you could see it already in qualifying and practice. We really have to investigate how we can improve.

"Ok, in the end they went two out of two, in this case because of luck, so we need to get the bottom of the root cause [of the pace deficit]."