Conway secures victory at Circuit of the Americas

Mike Conway claim his second consecutive victory in the LMP2 category in the 6 Hours of Circuit of the Americas in Austin, Texas.

London, UK – Mike Conway is having a great second half of the FIA World Endurance Championship. Last weekend saw him claim his second consecutive victory in the LMP2 category in the 6 Hours of Circuit of the Americas in Austin, Texas. 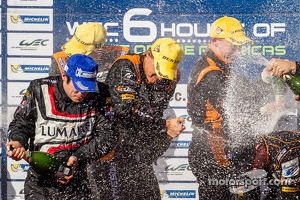 Driving the No. 26 G-Drive Oreca-Nissan car, Conway with his teammates John Martin and Roman Rusinov also earned their second pole position. Martin and Conway set a four-lap average of 1m54.951s to take pole by a second ahead of their class competitors.

The Delta-ADR team then went on to dominate the race. Conway took over the wheel from Rusinov with two hours remaining and drove a superb stint. He continued to increase the lead and when the checkered flag was shown, ended up a lap clear of their nearest rivals and the team recorded the fastest lap.

“Great weekend for the Delta-ADR G-Drive crew again,” said Conway. “We were quickest in all sessions picking up the pole, race win and fastest lap! It was looking like a close battle with the OAK Racing cars but once we opened up a big lead it was ours to loose. With the OAK cars not finishing well it helps our championship campaign, but we need to keep on winning! Looking forward to Fuji in October now.”

The team picked up 26 points and sit fourth in championship with 72 points with three races to go.

Next up for Conway, will be his final race of the 2013 IZOD IndyCar season. He will re-join Dale Coyne Racing for the Grand Prix of Houston; the double-header weekend will take place on October 5-6, 2013.