Bradley says Yacaman "well out of order" during Fuji battle 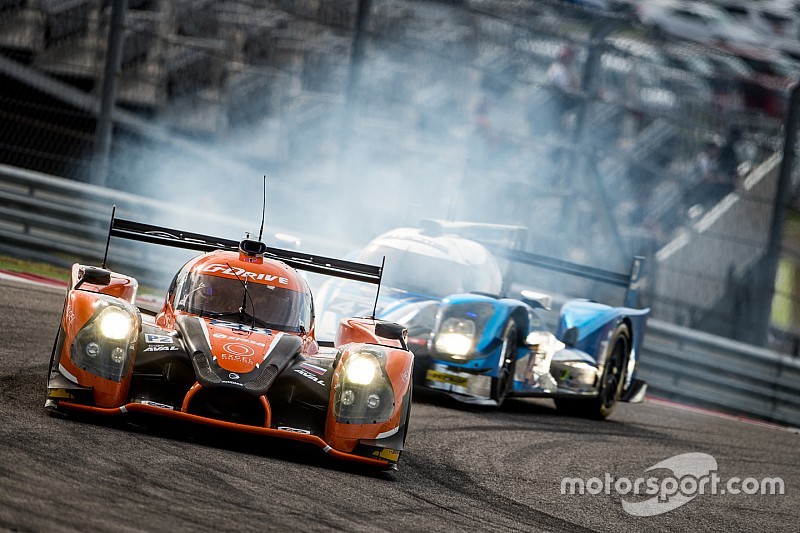 KCMG driver Richard Bradley believes that G-Drive Racing's Gustavo Yacaman's driving was "well out of order" after the pair's multiple clashes during last weekend's WEC round at Fuji.

Both G-Drive Racing Ligiers, driven by Yacaman and Roman Rusinov, were involved in contact with their title rivals in the KCMG ORECA 05-Nissan, resulting in Bradley and teammate Matt Howson losing the lead in the LMP2 points standings.

Speaking to Motorsport.com, Bradley hit out at Yacaman as he explained what he experienced in the cockpit during several fraught incidents with both of the G-Drive cars during the final hour of the Fuji race.

“The battle with Rusinov was initially okay and the move I made on him to take the lead was hard but fair,” Bradley said.

“But [Rusinov] was obviously annoyed and after that he started banging doors on the straight. He actually damaged my car for the first time then.

“Then he hit me up the back going in to the chicane and knocked me wide to get through and damaged the left rear and this caused the full course yellow.

"This was a battle for the lead and it was near the end of the race on a damp track and I accept hard racing in those conditions.

"What happened was looked at by Race Control and they concluded that it was a racing incident. I obviously don’t like what happened, particularly as having caused the Full Course Yellow, Rusinov then benefitted from it, but I will go along with how Race Control read it.

“I really don’t like the rest of it though - we pitted after the Rusinov incident as scheduled and when I went back out, Yacaman, who was a lap behind, managed to hit me at the rear, spin me around and gave me a puncture, so I had to come in again.

"This should never have happened - he was a lap down!”

“I came out ahead of Yacaman again, this time he’s on the same lap and we are fighting for position and tries to get through,” continued the Le Mans LMP2 class winner.

“The guy then jinks at me on the straight and towards the pitwall, which in my opinion was well out of order.”

“Then I get him back again round the outside of turn 3 before he hits me twice and takes me out heading to the chicane, and he just drove me out of the race.

“I don’t want to say too much about this incident now because it is still being reviewed by the FIA. The FIA made an initial decision but suspended it when they realised that they did not have all the facts.

"All I can say now is that our data clearly shows that I had been hit before I braked.

"In all of this I received three big hits from the G Drive cars. That’s not counting all the small impacts. I didn’t hit them once. Tells a story doesn’t it?”

Bradley is nonetheless adamant that the incidents last weekend will only make he and his KCMG team stronger as they look to claw back lost points at Shanghai and Bahrain.

“I’m very frustrated by it all. The reality is that whatever is decided to be done and whilst we as a team will help and assist [the FIA] as much as we can, we won’t get our points back," he added.

"This means we will fight even harder now and we will do everything we can to fight for the Championship. I’m of the opinion this will make us stronger.”

Yacaman, who along with Bradley was interviewed by the stewards after the race, said: "In the end, Bradley was very aggressive in his way of defending.

"Before the final incident I had a couple of contacts with him. It's a shame what happened because no driver wants to put another driver in the wall, it was never my intention.

"I went much faster than him, and then he changed, defended, made movements and it was very unfortunate."

The FIA will consider further telemetry evidence from the KCMG team after suspending their original decision to reprimand Bradley.

The decision read: "With regards to decision No. 21, the Stewards at 20:30 today received from the team #47 new data in order to establish that driver Richard Bradley was under full throttle when he was hit by car #28.

"In order to consider whether or not this document could be a new element which can make the Stewards reconsider their decision, the Stewards decide to suspend their previous decision No. 21 until receiving new analysis and possible additional evidence.

"The Technical Delegates have taken data supplied by KCMG for further investigation and will prepare a report for the Stewards for the next WEC meeting. The competitor agrees with this proposal."

A further communication with relation to the incident at Fuji is expected at the Shanghai event later this month.