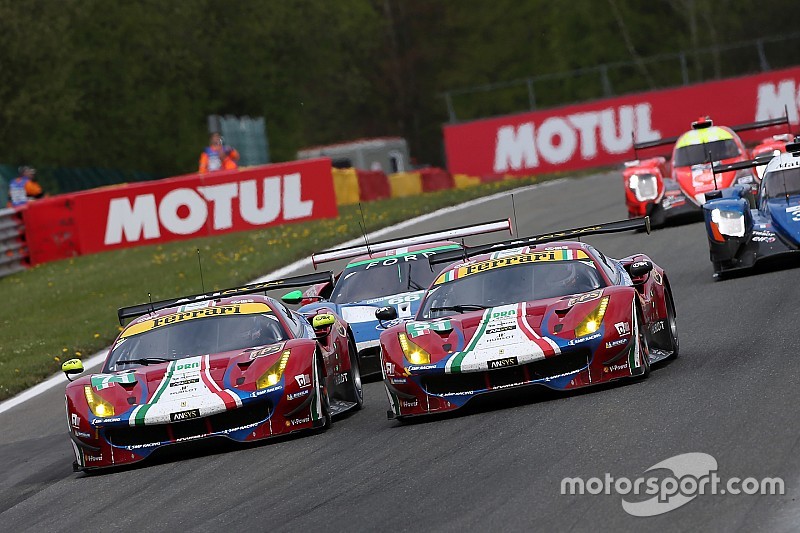 Ferrari driver Sam Bird says he relished an "intense" duel with his teammates for the GTE Pro class win during last weekend's WEC 6 Hours of Spa, which raged for much of the duration.

After losing out to Ford in the season opener at Silverstone, Ferrari dominated at Spa-Francorchamps, taking a comfortable 1-2.

The #51 and #71 cars spent most of the first five hours running nose to tail, which featured several overtakes including one that led to contact between Bird and Alessandro Pier Guidi.

That latter was holding first, but as the #7 Toyota LMP1 car lapped him at Les Combes, he ran wide, allowing Bird to go side-by-side.

The Briton kept the inside line until Rivage, where he forced Pier Guidi off track, the Italian also forced to temporarily give up second place to the #66 Ford, which ran with the Ferraris early on.

Bird said there was no bad blood with Pier Guidi and this teammate James Calado after the incident, and that he enjoyed what he described as an intense battle with the #51 crew.

"[It was] just rubbing," Bird said. "It was intense, it was racing that's what fans want to see, they come to see exciting battles and we did that today through Les Combes and down the hill, it was pretty cool.

"It's not so difficult to worry about not crashing [with the sister car], it was just difficult because they push us so hard. You've got two world class drivers in Pier Guidi and Calado, and they want to win."

The two Ferraris continued to run close together until the last pitstops, after which Bird rapidly pulled away from Calado, who was ordered to back off after suffering with rear tyre degradation.

Rivals will be closer in Le Mans

Bird and his teammate Davide Rigon eventually beat Pier Guidi and Calado by a lap, while the #51 dup had another half-minute advantage over the third-placed #66 Ford, which lost time in a collision with the #31 Rebellion.

However, Bird doesn't expect to keep the same level of superiority in Le Mans, where he expects Ford, Porsche and Aston Martin will all go "full guns blazing".

"You can bet your bottom dollar Porsche, Ford and Aston Martin come full guns blazing at Le Mans and it will be an incredibly difficult race.

"We're going into Le Mans off a win, which is always nice, but there is a lot of work to do. We need to finalise a complete package as a racing team."