Benoit Treluyer at Silverstone: A shot in the dark

At Spa, theater of the next round of the WEC, the Audi trio will have revenge!

First missed appointment for Benoit Treluyer, Marcel Fässler and André Lotterer during the opening round of the FIA World Endurance (WEC) held at Silverstone last weekend (19/20 April). However, the three Audi Sport team members leave England after an instructive and hopeful event. At Spa, theater of the next round of the WEC, the trio will have revenge!

Sunday at Silverstone. Ninety-fourth lap of the race. Benoit Treluyer to whip up on the Porsche Brendon Hartley then third. The start of the race was not the easiest for French and his teammates Marcel Fässler and André Lotterer. Having started, it was forced to defy the elements slicks. Conditions that led to the German guilt and lost some time at the Audi No. 2. At the start of Copse corner, as he always did in the previous rounds, Benedict bites the buzzer to rush in fast curve. Except this time, the maneuver propelled him into the guardrail.

"Normally, if he asks afterwards, there grip! Initially, I made a mistake, but to be sure, we'll peel the data. During my stint, the track conditions were difficult, but not as much as those faced by André. 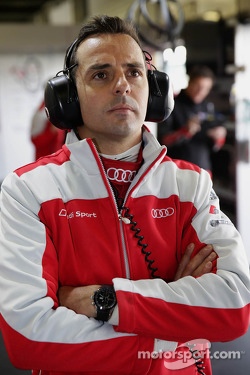 When you watch the video, you can see that I am on the curb, but also on other towers that had no influence on the balance of the car. I do not try to cover me, but it seems a bit strange. There is 98% chance that it is my fault, but check the remaining 2%! " After hitting the rails, Benedict has done everything possible - even more - to get the car back to the pits. An act of great courage who went straight to the heart of fans.

"I appreciated the many messages on Twitter, but I did my duty, he whispers. I worked hard to get back on track, but after a while, I had to face the facts. It was not easy to give up because I really wanted to go after this race. When I realized that I could not steer the car, I threw in the towel, death in the soul! If my behavior has delighted fans, I am happy and grateful for their support. At a time like this one, it's huge! This is an additional source of motivation, not only for me but also for the entire Audi Sport team. "

A team that has not been rewarded for her courage during the opening round of the World Endurance Championship FIA. Stay on slicks at the height of the downpour would pay more if the rain had stopped. Unfortunately, the lull never came. Lucas di Grassi made a mistake at the wheel of the No. 1, while Andre Lotterer, the No. 2, was released without harm an off track excursion which he was not responsible. Benedict, for his part, has not experienced such luck.

"I'm really sorry for the team because the performance was there, he regrets. The championship that opens looks promising. The three manufacturers have found a remarkable job. Despite philosophies and different technical options are found in the first three places on the grid. As at the beginning of the race, he was particularly intense. Obviously, we could do without the harsh weather conditions for this first appointment. After all, we - ie manufacturers and the FIA ​​- not yet mastered 100% everything that happens. " Also disappointing is it Treluyer and Audi, this introduction is not less great promise.

"We were trying to fill some of our late when I left, says Benedict. During my stint, I could board the Toyota 7, and we visions the podium. We are now going to use the two weeks until the second race at Spa-Francorchamps to learn from Silverstone. With everything that happened this weekend, the mechanics will not have too long to embrace their loved ones and I am sorry for them. But we are all driven by the same desire ... "The back of the top step of the podium!

6 Hours of Spa-Francorchamps, the second round of the World Endurance Championship FIA, will be held on 2 and 3 May.

Porsche eager to defend points lead in the Ardennes