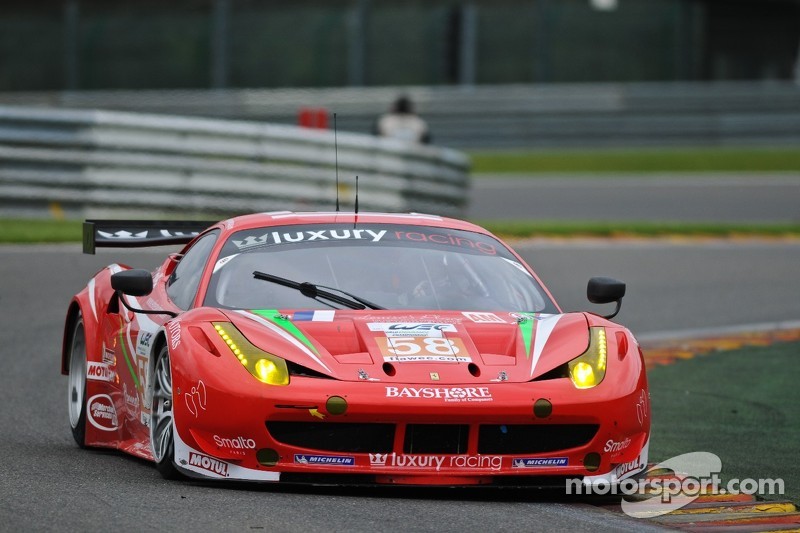 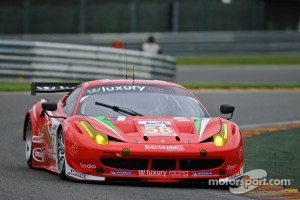 Keasbey, NJ – May 5, 2012 – Young American sports car stars Gunnar Jeannette and Frankie Montecalvo made their FIA World Endurance Championship debut at Spa-Francorchamps in Belgium today, finishing the day as the top ranked US drivers in the LMGTE-AM class.

The duo completed the six-hour endurance with a top-five finish aboard the No. 58 Luxury Racing Ferrari 458 Italia.

Jeannette and Montecalvo outran some of the world’s best drivers in the field. Fellow American Ferrari competitors AF Corse-Waltrip, featuring NASCAR driver Brian Vickers, had an incident in the warm-up and failed to take the green flag. The other American Ferrari team of Krohn Racing finished seventh in the GTE-AM class.

Jeannette was tasked with qualifying the No. 58 Ferrari 458 Italia on Friday afternoon. Jeannette’s quickest time of 2:22.534 at 177.50 mph, placed the team in the third position for the start of the race. Luxury Racing was the second quickest Ferrari in qualifying and the top American driving team.

During the opening rainy hours of the race, Jeannette took to the wheel of the Ferrari and maintained the third position in class. Montecalvo was second behind the wheel once the rain stopped and the track began to dry. Despite this being his first race at Spa, Montecalvo kept pace with the rest of the field and maintained the third position for his stint before handing over to German teammate Pierre Ehret.

Each driver completed two driving stints during the six-hour event. In their remaining stints, Jeannette and Montecalvo battled their way back into the top-five position.

Gunnar Jeannette “I set high expectations heading into any race. So I would have liked to finish higher than fifth, but it was a good experience for everybody. I think Frankie did a good job. The start of the race was really difficult with the conditions. You couldn’t see anything during the first two laps because of the amount of spray. We made some changes to the Ferrari to make it a little bit happier in the rain, thinking it was going to rain for the majority of the race. The Ferrari was very, very good in the wet and soon as it started drying out, we started losing a bit of performance. I was able to hold on through that first stint and race until the track was dry enough to come on and hand it over to Frankie and put dry tires on.

“In my last stint, we were close to a Corvette and I was able to catch up to him in the last couple of laps. I got right on his tail but wasn’t able to get by him. We had too big of a top speed deficit, which around a track like Spa, it was too much to make up.

“We learned a lot this weekend about the Ferrari’s car behavior, so we’re building a knowledge base. This is the first racing I’ve done in the 458. We’re working on getting up to speed as quickly as we can, build the knowledge base and move from there. This weekend was very beneficial to all of us heading into the Le Man test, race and the rest of the season.”

“This is the first time both of us raced in a World Endurance Championship event. This championship isn't something that happens all that often. The last time it was run by the FIA was in the 90s, so being a part of this is all very special. For a couple of Americans to race in this series in a grid that doesn’t have many American racers, obviously we want to represent our country well.

“Part of the thing that I love about traveling the world and doing things like this is how excited I am to come home. I am looking forward to getting back home tomorrow.”

Frankie Montecalvo “Gunnar qualified the Ferrari third, so we had a great starting spot for the race. He did an awesome job keeping it safe and out of trouble because the race started out pretty wet. The rain stopped about halfway through his stint and the track started to dry out, so we made the decision to put on dry tires for my stint. I went out there, it was not completely dry but as my stint went on, the conditions improved and a nice dry line formed. We started to have some fun and chopped down the lap times. I didn’t have as much practice time as I expected this weekend. There was an issue with the car on the first day, and I only got a couple of laps on the second day. I went into the race knowing the track, just from the couple of laps. There were some things I wanted to improve on, driving-wise and get more experience and I think I accomplished that. I kept getting quicker during the each stint and got to a good consistent pace once the track finally dried. It was a lot of fun. Usually sometimes races get stressful but it was almost relaxing because it was such a great track to race on. Plus there was a good group of cars out there.

“It was an interesting race. I’m used to racing prototypes and the one doing the passing. The biggest thing I had to get used to was being the car passed. It’s not that you’re slower; you are in a different class car. In the prototype, you’re constantly setting people up to pass the slower cars and also to keep pace with the other cars you are racing against in the same class. I had to get used to where to let them by and how to do to that and not affect your lap time.

“We did have a penalty during the race. It happened during Pierre’s stint, but I had to serve the penalty because that’s how the timing worked out. A couple of things went wrong, but if everything went as we planned, I think we could have had a better finish – definitely fourth place, maybe a podium.”