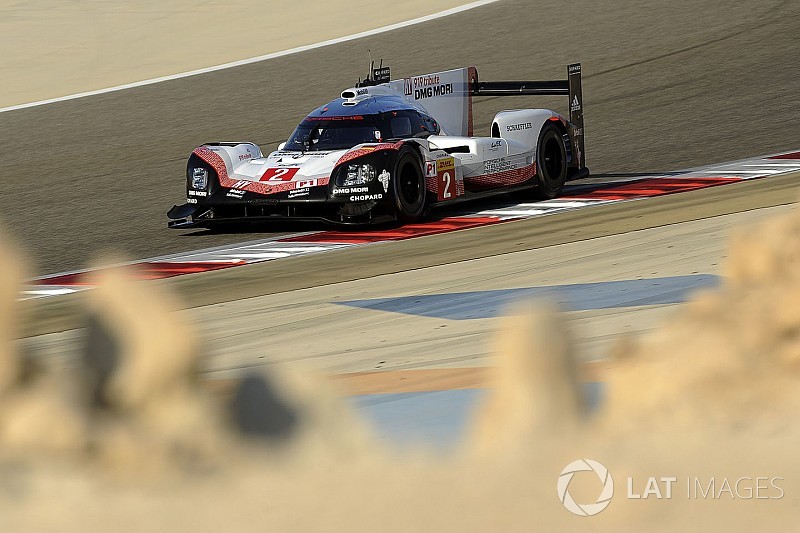 Porsche led the way in final practice for this weekend's Bahrain FIA World Endurance Championship season finale in another session that was interrupted by red flags.

Timo Bernhard set the day's quickest time of 1m42.438s on his first flying lap in the #2 Porsche, some seven tenths clear of the sister #1 919 Hybrid of Neel Jani - but well short of the best times set on Thursday evening.

After topping both Thursday sessions, Toyota ended up third and fourth in FP3, the Japanese marque's best time of 1m43.734s coming courtesy of Anthony Davidson in the #8 TS050 Hybrid.

The #7 Toyota was two tenths further back with Mike Conway at the wheel.

That was how the order stood when the hour-long session was red-flagged with 29 minutes remaining, the result of the #86 Gulf Racing Porsche setting on fire.

Action resumed with 20 minutes left after a quick clean-up operation, prompting a flurry of improvements in the LMP2 and GTE classes.

However, it was an early flyer from Ho-Pin Tung in the title-contending #38 Jackie Chan DC Racing Oreca that ended up the benchmark, the Chinese driver setting a best effort of 1m48.879s.

That was a little over two tenths up on Andy Priaulx in the #67 Ford GT and half a second quicker than Davide Rigon's best effort in the #71 Ferrari.

Thursday pacesetter Aston Martin could manage no better than sixth.

Matt Griffin set the quickest time in the GTE Am class, posting a 2m00.661s in the #61 Clearwater Ferrari.

WEC BoP has worked "against" Ford all year - Priaulx