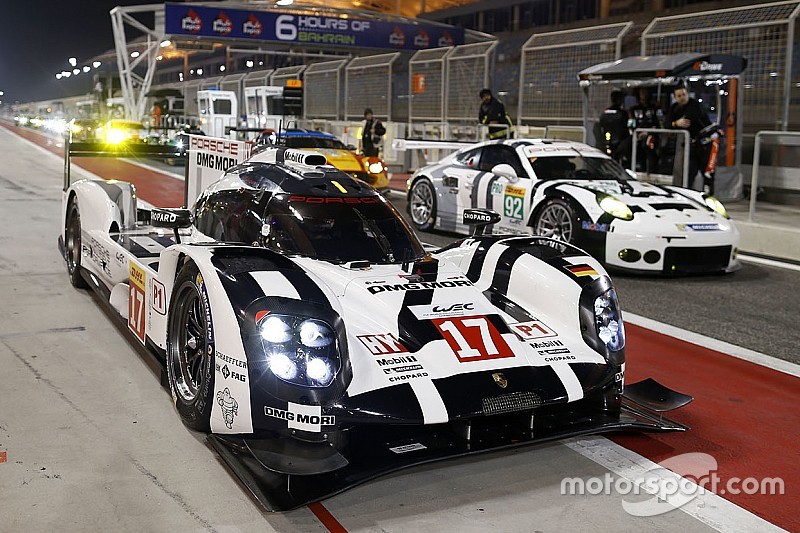 Porsche’s Brendon Hartley and Timo Bernhard set pole position for the World Endurance Championship’s season finale at Bahrain, edging them – and Mark Webber – a step closer to the title.

Hartley set 1m39.802s on his first flying lap, despite a big oversteer moment at Turn 11. Bernhard made no such mistakes, and recorded an even faster 1m39.670s for an average of 1m39.736s. Mark Webber did not take part in qualifying.

The sister 919 Hybrid of Romain Dumas/Marc Lieb averaged 1m40.100s, 0.364s down on the points-leading car. The fastest driver on that crew, Neel Jani, did not qualify the car as Porsche wanted to ensure the point for pole went to the #17 car.

There was a tight battle between the Audis, with the Marcel Fassler/Andre Lotterer R18 just shading the Loic Duval/Oliver Jarvis car by a tenth of a second.

Toyota qualified in their usual P5 and P6 slots, with the #1 car beating #2 by three tenths.

In LMP2, the Signatech-run Alpine set the pace with Tom Dillmann initially, then Paul-Loup Chatin helped annex the pole despite the latter running wide at the final corner.

The KCMG Oreca of Matthew Howson and Nick Tandy was just 0.067s shy of the class pole average.

Qualifying amid the GTE ranks got off to a false start when the circuit’s floodlights failed two minutes into the session.

After a 20-minute delay, Ferrari locked out a 1-2 in Pro with Toni Vilander and Gianmaria Bruni averaging 1m58.347s for their third pole of the season, 0.033s quicker than the sister AF Corse-run 458 Italia of Davide Rigon/James Calado.

The Marco Sorensen/Nicki Thiim Aston will start third in class, ahead of the sister Vantage V8 of Alex MacDowell and Richie Stanaway.

The top Porsche was the Patrick Pilet/Frederic Makowiecki in fifth, 0.6s off the pace.

Aston ruled the roost in Am, however, with Pedro Lamy/Paul Dalla Lana taking the top spot ahead of the Larbre Chevrolet Corvette Gianluca Roda/Paolo Ruberti and the SMP-run Ferrari of Victor Shaytar/Andrea Bertolini.