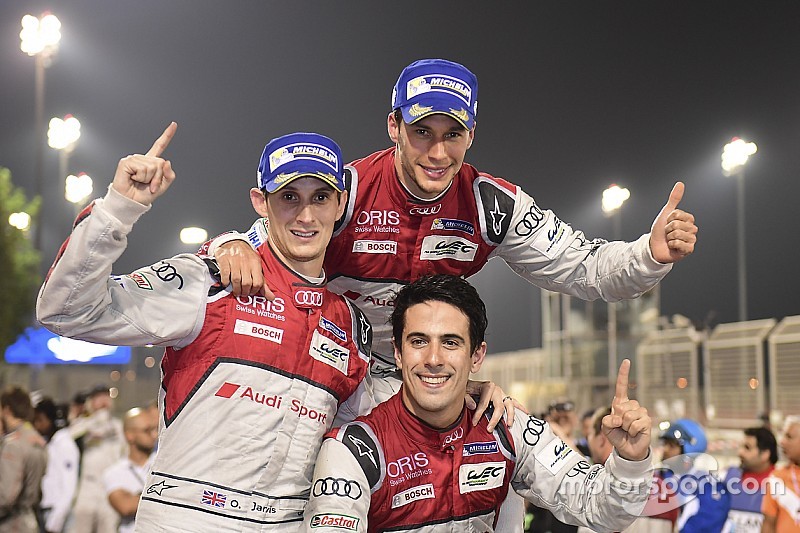 Audi secured a one-two finish in its final FIA World Endurance Championship race in Bahrain, as the #2 Porsche crew of Neel Jani, Romain Dumas and Marc Lieb did enough to seal the drivers' title with a sixth-place finish.

On an emotional day for the Audi Sport Team Joest squad, its pair of R18 e-tron quattros were clearly the class of the field, with the #8 car of Lucas di Grassi, Loic Duval and Oliver Jarvis bringing home the Ingolstadt marque its 17th and final WEC win.

The polesitting car was passed in the second hour by the sister #7 car of Andre Lotterer, but a slow changeover to Benoit Treluyer at the third stops handed back the advantage to the #8 trio.

At the halfway point of the race, a Full Course Yellow period caused the two Audis to go on diverging strategies, as the #8 car pitted while the #7 car stayed out - but Duval retook the advantage when he passed Treluyer early in the fifth hour, and was able to keep ahead despite losing pace on worn tyres towards the end of his stint.

In the end, di Grassi brought home the #8 car with an advantage of 16 seconds over Marcel Fassler in the #7 machine, the pair completing a historic one-two for Audi.

Third place went to the #1 Porsche of Mark Webber, Timo Bernhard and Brendon Hartley, 1m17s down on the winning Audi.

The best of the 919 Hybrids settled into third place during the second hour, warding off a challenge from the #5 Toyota, but never had the pace to threaten the Audis - although Webber did get to end his illustrious career by bringing the #1 car home at the end of the race.

Toyota ended the year in disappointing fashion, with both of its cars a lap down. The #5 car of Sebastien Buemi, Anthony Davidson and Kazuki Nakajima came home ahead of the #6 car of Kamui Kobayashi, Mike Conway and Stephane Sarrazin, who realistically needed a win to take home the title.

Instead, it was the #2 Porsche of Jani, Lieb and Dumas that scooped the championship with a sixth-place finish, three laps down.

Contact with the #78 Porsche after 50 minutes led to a left-rear puncture for Jani that immediately took the #2 car out of contention for the win, with a change of rear bodywork also necessitated. But after that the points leaders were able to complete the rest of the distance untroubled, needing only to finish with the #6 Toyota not in a winning position.

Rebellion Racing finished seventh overall in its final outing in the privateer LMP1 division, four laps ahead of the ByKolles CLM.

G-Drive goes from last to first

In LMP2, the #26 G-Drive Oreca team of Rene Rast, Alex Brundle and Roman Rusinov scored an against-the-odds victory after a superb charge from the back of the field, the result of the car failing scrutineering after qualifying.

The decisive move came courtesy of Rast with 20 minutes to go, as the German passed Filipe Albuquerque in the #43 RGR Sport by Morand Ligier also driven by Bruno Senna and Ricardo Gonzalez, going on to win the class by 6.8 seconds.

Trying an unorthodox strategy was the #31 ESM Ligier team, which had built a big advantage over the rest of the field by virtue of leaving silver-rated Chris Cumming's mandatory drive-time until the very end of the race.

The sister #30 ESM car, the KFC Indonesia-liveried machine of Giedo van der Garde, Tom Dillmann and Sean Gelael, completed the top five, assisted by a late problem for the #44 Manor car that consigned it to the garage with just over 30 minutes to go.

Aston Martin secured the drivers' title in the GTE-Pro division with its #95 car of Nicki Thiim and Marco Sorensen, who took their second win of the season.

It had been the sister #97 car of Darren Turner and Jonathan Adam that made the early running, the British duo leading the first half of the race before losing a front-right wheel at the start of hour four.

That left the #95 car with a clear advantage over the two AF Corse Ferraris, which completed the podium with its two 458 Italias.

Gianmaria Bruni and James Calado briefly led the way at the start in the #51 car, but couldn't hold back the Astons, while Sam Bird and Davide Rigon took third after clearing the best of the Fords, the #67 car of Harry Tincknell and Andy Priaulx, at mid-distance.

After limping back to the pits on three wheels, the #97 car was able to claw its way back up to finish fifth in class, although this wasn't enough to prevent Ferrari from sealing the GT manufacturers' title.

The #83 crew came into the race needing only a single point, with the #98 Aston Martin of Pedro Lamy, Paul Dalla Lana and Mathias Lauda having to win to have any chance of taking the title.

But any hopes of them beating AF Corse to the title were extinguished at the start of the fourth hour, when Dalla Lana suffered an engine failure and parked the ailing #98 car off the side of the track.

The class win went to the #88 Abu Dhabi-Proton Porsche of Pat Long, Khaled Al-Qubaisi and David Heinemeier Hansson for the second time this season.

Webber: My last year in racing couldn’t have been much better