The #8 Toyota holds a comfortable advantage at the halfway point in the Bahrain 8 Hours, with Ferrari leading Porsche in a close two-way scrap in the FIA World Endurance Championship’s GTE Pro ranks.

Sebastien Buemi, Kazuki Nakajima and Brendon Hartley head the field in the #8 GR010 Hybrid, having been let through by the sister #7 car driven by Mike Conway, Kamui Kobayashi and Jose Maria Lopez at the beginning of the second hour.

However, second place should still be enough for the #7 crew to defend their title in the top class and add to their victory in Le Mans 24 Hours in August, having entered the title decider with a 16-point gap at the top of the standings.

The Alpine is running five laps down on the leading Toyotas after suffering gearbox gremlins in the opening hour of the race.

Nicolas Lapierre had taken the lead with a blinding getaway from third on the grid in the #36 A480-Gibson, passing Buemi and polesitter Conway through the opening sequence of right-and-left handers.

However, Lapierre was never able to pull away from the Toyotas and was passed by both cars on the run down to Turn 11 on successive laps in the first 30 minutes of the race.

The Frenchman had slipped the best part of 30 seconds behind the leading duo when he suddenly slowed down on lap 25, before making his way back to the garage for lengthy repairs.

WRT holds the top spot in the LMP2 class following an impressive recovery drive by the #31 crew comprising Ferdinand Habsburg, Robin Frijns and Charles Milesi from seventh in the opening four hours of the contest.

Frijns took over the lead in the third hour from bronze-rated Fritz van Eerd, who had previously been handed a 40-second advantage by Giedo van de Garde following a typically rapid opening stint by the ex-Formula 1 driver.

Van Eerd, van der Garde and Job van Uitert later dropped to sixth in LMP2, albeit still first in the Pro-Am division, after the #29 Racing Team Nederland electing not to make a pitstop during the first of the three Full Course Yellow periods.

Second place in LMP2 class is held by Stoffel Vandoorne, Sean Gelael and Tom Blomqvist in the #28 JOTA despite a spin for the Indonesian driver at the beginning of the second hour.

United Autosports provisionally holds the final spot on the podium, with Fabio Scherer currently at the wheel of the #22 Oreca he shares with Filipe Albuquerque and Phil Hanson.

The #38 JOTA runs over a minute off the leaders after picking up a drive through penalty for speeding in the pitlane. Anthony Davidson, Antonio Felix da Costa and Roberto Gonzalez earlier lost roughly 20s when the retiring Davidson passed through the pitlane due to a miscommunication with the team. 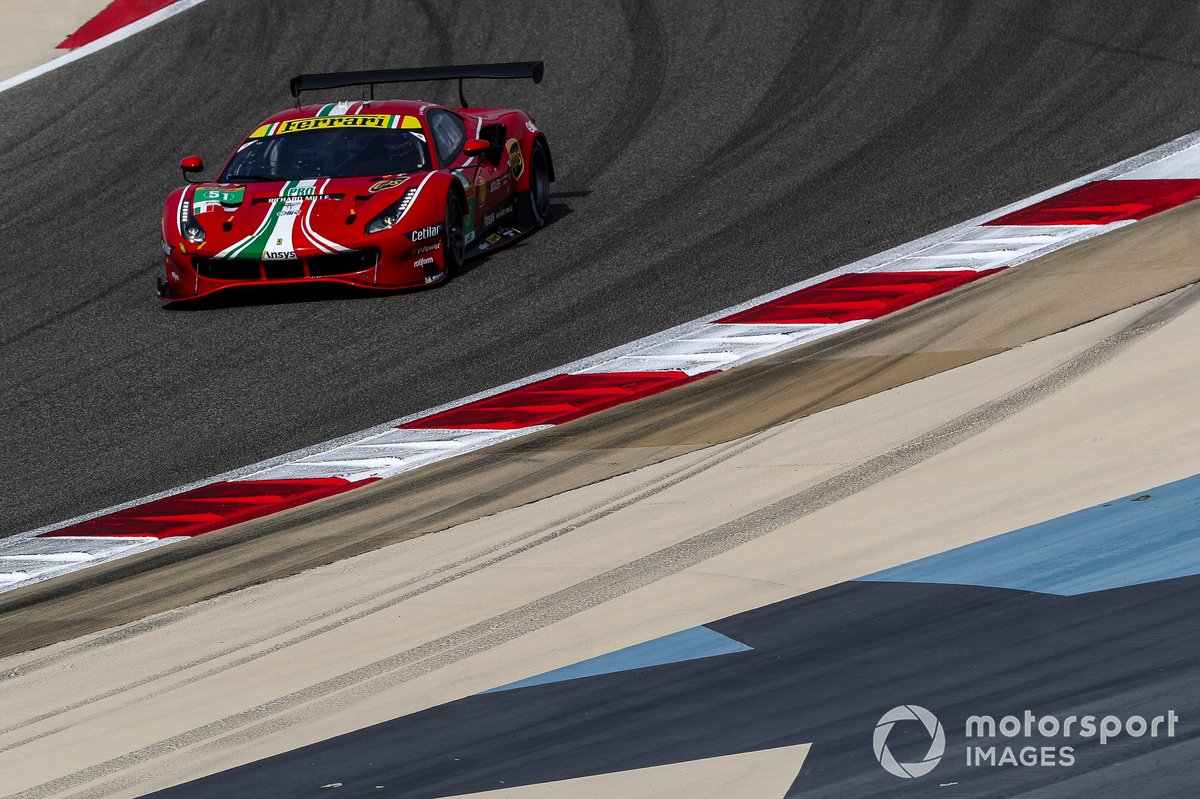 In the GTE Pro ranks, Ferrari snatched the top spot from Porsche with a quicker pitstop during the third FCY period.

With both crews level on points, whoever finishes ahead in the race will clinch the drivers’ title.

Daniel Serra and Miguel Molina sit third in the #52 Ferrari, with Richard Lietz, Gianmaria Bruni and Frederic Makowiecki propping up the four-car class in the #91 Porsche.

The GTE Am class is led by Roberto Lacorte, Giorgio Sernagiotto and Antonio Fuoco in the #47 Cetilar Racing Ferrari.

Keating suffered a puncture following an opening lap collision with the #98 Aston Martin driven by Paul Dalla Lana, but the #83 crew were able to recover from the setback to move into a potential podium spot as the race reached its halfway mark.

The WEC 8 Hours of Bahrain is being streamed live on Motorsport.tv. Click here for more information.