The #7 Toyota crew of Mike Conway, Kamui Kobayashi and Jose Maria Lopez has moved closer to winning the FIA World Endurance Championship title after securing a dominant victory in the 6 Hours of Bahrain.

Conway, Kobayashi and Lopez, who also won August's Le Mans 24 Hours, led home the sister #8 crew of Sebastien Buemi, Kazuki Nakajima and Brendon Hartley for a Toyota 1-2 after a relatively uneventful race in the desert.

Buemi started the race from the front after Hartley secured pole on Friday, but the #7 car soon proved to have the upper hand on pace and tyre wear.

With the Bahrain International Circuit only having one medium to high-speed left-hander, Toyota decided to only change the left-hand side tyres where possible to reduce pitstop times.

The drivers of the #8 car appeared to struggle more with wear, however, and when the car appeared in the lead after the first pitstop cycle it was ordered to let the quicker #7 car through. The #8 crew lost another 17 seconds in the second half of the race due to a slow stop.

Kobayashi led the #7 Toyota GR010 Hybrid across the line with a 50-second lead over Nakajima in the #8 car, taking the third consecutive Bahrain win for the #7 entry.

Toyota also officially secured its teams' world title, while Conway, Kobayashi and Lopez will head into next weekend's season finale as the title favourites.

The only remaining Hypercar entry, the #36 Alpine A480-Gibson, finished one lap behind in third. As has been the case all season, its shorter stint lengths prevented the French manufacturer from mounting any sort of challenge on the Toyotas.

As usual the LMP2 class was the pick of the bunch, with an excellent battle between WRT, JOTA and United Autosports livening up the race.

The Le Mans winning #31 WRT Oreca of Robin Frijns, Ferdinand Habsburg and Charles Milesi led for long spells of the early race after Frijns drove to the front from seventh on the grid.

They were soon challenged by the #22 United Autosports Oreca of Filipe Albuquerque, Phil Hanson and Fabio Scherer, while the #28 JOTA Oreca of Stoffel Vandoorne, Tom Blomqvist and Sean Gelael also recovered from a nightmare start to slot back into the top three.

In the polesitting car Gelael dropped from first to fifth on the first lap and then lost further ground after a spin, but after two hours the entry was back in the hunt.

Vandoorne and Blomqvist worked the #28 back up to second as United's challenge faded in the final third, but JOTA was unable to prevent the Belgian WRT outfit from winning its second WEC race on the bounce and taking the LMP2 championship lead.

Blomqvist finished second, one minute behind Frijns, while the second of the JOTAs, the #38 car of Antonio Felix da Costa, Anthony Davidson and Robert Gonzalez passed United's Albuquerque to finish third a further 15 seconds in arrears. 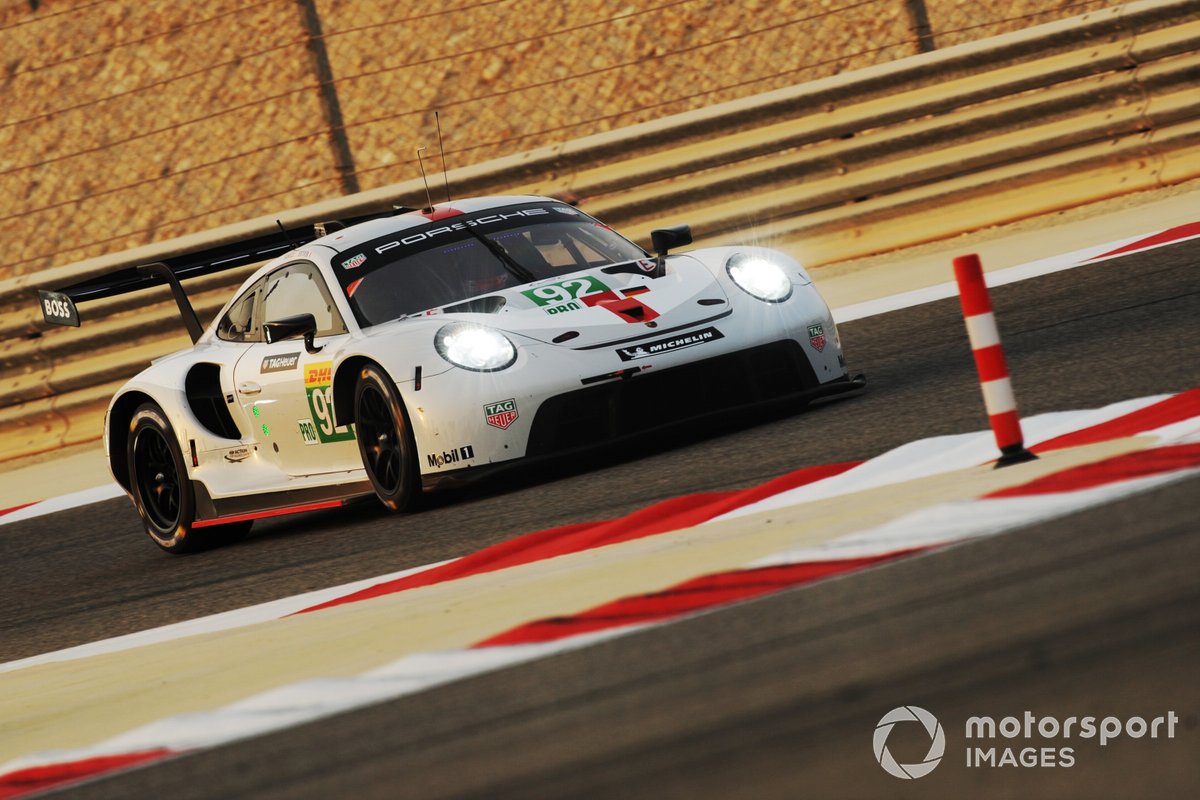 In a depleted four car GTE Pro class the two works Porsches easily had the measure of the AF Corse Ferraris.

The #92 Porsche GTE 911 RSR-19 of Kevin Estre and Neel Jani led all race, with the #91 entry of Gianmaria Bruni and Richard Lietz comfortably slotting in behind in close formation.

That caused some angst in the Porsche garage as Lietz asked the team if he was allowed to pass, but the Austrian was told to hold station as both cars were conserving tyres.

In the #51 Ferrari GTE 488 Evo Alessandro Pier Guidi and James Calado took a distant podium, over 35s behind, beating their stablemates Daniel Serra and Miguel Molina in the #52 car.

Estre and Jani also took over the GTE Pro championship lead from Pier Guidi and Calado.

Aboard the #33 Aston Fraga was hounded in the closing stages by the #77 Dempsey Proton Porsche of Matt Campbell and the Team Project 1 Porsche of Matteo Cairoli but sealed the win to give TF Sport a chance to challenge the #83 AF Corse crew to the title in the season finale.

The 2021 WEC season will reach its conclusion next weekend at the same venue with the Bahrain 8 Hours.