Strakka Racing has unveiled its new Honda Performance Development ARX-03c in which it will challenge for top LPM1 Privateer honours in this year’s FIA World Endurance Championship – with a new colour scheme signalling a return to the team’s traditional black and blue livery.

As a trademark of the Silverstone-based team, Strakka Racing’s 200mph LMP1 sportscar carries a huge Union Flag emblazoned upon the #21 car’s shark fin, which is a high-visibility tribute to its proud origins. 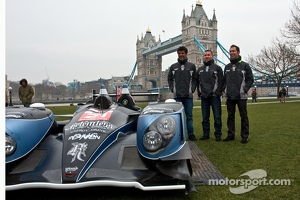 Flying the Union Flag also celebrates the fact that Strakka Racing is, once again, fielding the only all-British LMP1 driver line-up in this year’s WEC – with Nick Leventis (London), Danny Watts (Buckingham) and Jonny Kane (Thame) driving together for a fourth consecutive season.

As well as speed, skill, mutual respect and a detailed understanding of each other, Strakka Racing’s driver line-up also has enormous endurance racing experience, with a combined total of 19 Le Mans 24 Hour starts between the three drivers.

Strakka Racing’s upgraded 2013-spec. HPD ARX-03c was unveiled in central London today, ahead of its race debut at the 6 Hours of Silverstone on Sunday 14 April.

Following a faultless systems shakedown test at Sywell Aerodrome in Northamptonshire yesterday (21 March), Strakka Racing will attend the official pre-WEC season test at the Circuit Paul Ricard in the south of France (March 29-30).

We’ve had a frantic winter getting the new HPD ARX-03c ready with some big performance upgrades and we’ve also tested our Strakka Performance cars in South Africa.

This has been beneficial to our drivers at Strakka Racing, and also to some exciting talent emerging through the motorsport ranks.

We’re returning to our traditional black and blue livery this year as it’s been missed by our crew and fans, and we think the car looks stunning. We will ensure that the results match the aesthetics!”