In terms of sheer performance the results were below those usually recorded by the french team, but it has not lowered its ambitions.

This afternoon, the three OAK Racing Morgan-Nissan LM P2s took part in the final qualifying session of the 2013 FIA World Endurance Championship. In terms of sheer performance the results were below those usually recorded by the french team, but it has not lowered its ambitions for this weekend and the aim is still unchanged - the 2013 LM P2 title!

The team had hardworking free practice sessions on the Bahrain International Circuit although it didn’t concentrate on sheer performance, rather on finding a setup giving a consistent and reliable car. Qualifying lasted only 20 minutes for OAK Racing as the team brought the cars back into the pits a few minutes early to save the tyres . 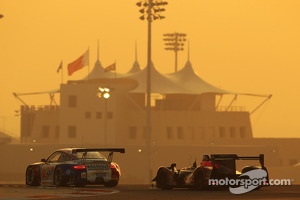 In the no. 24 Morgan-Nissan LM P2 Olivier Pla was the first to go out, and he set a best time of 1m 50.666s. He was relayed by Alex Brundle and the average of the duo’s four timed laps was 1m 51.718 giving them third place in LM P2 behind Pecom Racing and G-Drive.

Bertrand Baguette and Martin Plowman qualified their no. 35 Morgan-Nissan LM P2 in sixth place, but their main objective is not victory in the race itself – it’s the title! Although they are going to continue working with the team between now and the start of the race tomorrow to find some more speed, they will have to drive carefully and finish the 6-hour endurance race to clinch the title.

Keiko Ihara has made consistent progress and will take the start in the no. 45 Morgan-Nissan LM P2. Even strating from last place in the category, if she has a good stint she will be able to move up the time sheets.

She can count on her team-mates Jacques Nicolet, and David Cheng the young Chinese hotshoe who will be racing in his second WEC round, to continue the good work. The whole team will continue working hard to stack all the odds in its favour for success tomorrow

Sébastien Philippe, Team principal: “Today we weren’t as quick as usual. No. 24, though, hasn’t done a bad job and is ideally placed behind Pecom Racing and G-Drive with which it’s fighting for a place in the championship. I think the car’s got a real chance. No. 35 didn’t really have a great qualifying session, but compared to the objectives set for this weekend, it’s not a priority. In no. 45 Keiko and David have both made a lot of progress, and they had a great session even if it isn’t reflected by their place on the grid. Their overall performance was pretty good and Keiko drove really well on new tyres .”

Olivier Pla, no. 24 Morgan-Nissan LM P2: “We were obviously hoping for better than third place in qualifying: in my case anyway! Alex and I did everything we could and it’s good to be starting from the second row in the category tomorrow. It’s going to be a long race and above all very tough in terms of tyre degradation. We did what we could to preserve our tyres during the session, while some of the others did a lot of laps. We still have work to do for the race tomorrow, but it’s an improvement compared to free practice this morning. We’ve got back on the pace and we have to continue in the same vein.”

Bertrand Baguette, no. 35 Morgan-Nissan LM P2: “Obviously, things didn’t turn out as we’d hoped in qualifying. Sixth place is a disappointment. I don’t really understand what happened. Compared to this morning the car clearly lacked speed and consistency; we just didn’t have what it took. We’re going to have to do some work before the race, even if our main objective is to score the points we need to clinch the championship. If we were a bit quicker it would make things easier, which would be a big help, so we’re going to work on that this evening and tomorrow morning and hope that we find some extra speed.”

Keiko Ihara, no. 45 Morgan –Nissan LM P2: ”For me, yesterday’s free practice sessions were very good because I am getting used to driving the Morgan-Nissan LM P2. It’s my third race with OAK Racing. During qualifying I made quite a lot of mistakes and I am a little bit disappointed. But now that I know how to drive the car, I hope to make a good start and push very very hard throughout the race!”