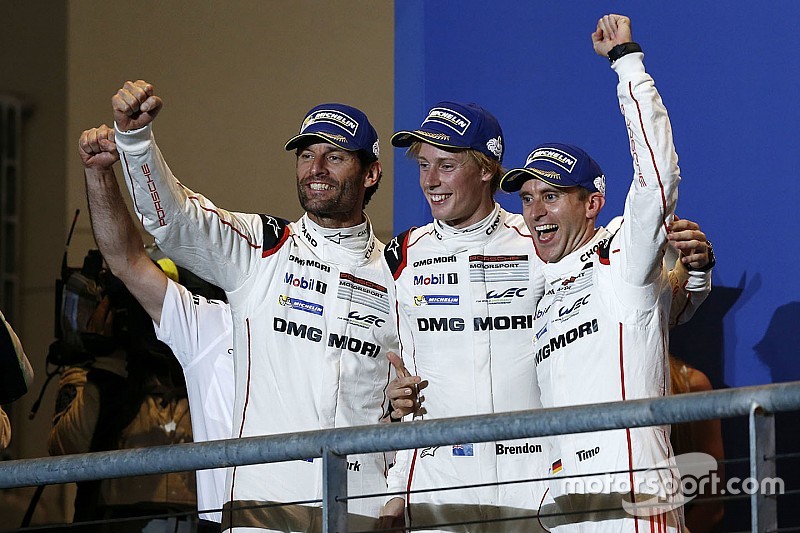 The No.17 Porsche of Mark Webber/Brendon Hartley/Timo Bernhard grabbed the lead at the start of the race, which started in daylight and ran into the night, from the No.18 sister car of Neel Jani/Marc Lieb/Romain Dumas.

Although Webber botched a pitstop by overshooting his box, his car was seemed doomed to finish second due to a pitstop infraction at his second stop when a mechanic touched the car while it was being refuelled.

But late drama hit the race leading No.18 car with just over 30 minutes remaining, as Dumas was forced into the garage with electrical issues – his one-minute lead having halved just before he pitted.

Audi’s challenge was also stymied by a one-minute stop/go penalty for its No.8 entry of Lucas di Grassi/Oliver Jarvis/Loic Duval, as a mechanic got his arm wrapped around the airhose causing him to drop the tyre he was carrying.

The No.7 car of Andre Lotterer/Benoit Treluyer/Marcel Fassler took third position from the sister car with 40 minutes remaining, which then became second with Porsche's late problems.

Toyota struggled as expected, with the Anthony Davidson/Sebastien Buemi No.1 car finishing a distant fourth – not helped by a penalty for when Davidson missed the pit entry and rejoined the track. Its second car was crashed out by Mike Conway.

The Webber-crewed Porsche team is now 10 points behind the No.7 points-leading Audi in the championship.

Poleman Jani led teammate Webber to the start, but Webber went around the outside of him at the first corner. Di Grassi held third, with Buemi lunging past the second Audi of Lotterer down the inside of Turn 1.

Webber extended a 6s advantage by lap 10, and Brendon Hartley built on that before Webber was back in for a second stint.

Davidson caught Treluyer in the No.7 Audi in second hour, but hit trouble when he missed the pit entry and was forced to cruise back to pits on hybrid power to avoid running out of fuel. The No.1 car received a stop/go penalty for the incident.

Audi’s challenge was dealt a huge blow when its frontrunning No.8 car received a 1m stop/go penalty for a pitstop infringement for a fumble when a mechanic got his arms wrapped around the air hose and dropped the tyre he was carrying, which was viewed as a loss of control.

It was within 10s of the second-placed Porsche at the time.

But it was a penalty for the leading Porsche that truly changed the complexion of the race, as a one-minute stop/go penalty was handed to the No.17 for a mechanic touching the car while it was being refuelled during its second pitstop.

That penalty, plus the time it lost with the extra pit-in and pit-out, was compounded by Webber overshooting his pit stall at the halfway mark.

“Simply overshot the box,” said Webber. “No excuse, I’ve never done it in my career, it’s my fault and we lost 25s.”

That meant his Bernhard was over a minute behind leader Jani after serving the penalty, with two hours remaining.

That handed the race to the No.17 car, and vaulted the No.7 Audi to second after it had run fourth for much of the race.

The No.18 rejoined the race for the final lap, finishing 12th overall.

Ed Brown went off in spectacular style after he lost his brakes at the final corner in his ESM Ligier, causing the race’s first full-course yellow. The car briefly tipped onto two wheels by the sausage kerb on the inside of the apex and he bounced backwards over the gravel trap into the TechPro barrier.

“I felt something pop, and went to the brakes [for Turn 20] and there was nothing, it just went to the floor,” said Brown. “So then I just said ‘okay, throw it sideways and try to scrub some speed off and don’t take it in nose first.”

Just as the halfway point was reached, Conway crashed his No.2 Toyota into the barriers under acceleration from Turn 11 while attempting to lap a GT car. That caused the second Full Course Yellow.

Conway tweeted: “Silly mistake on my part, lost it on traction.”

Sam Bird led the LMP2 class for G-Drive in his Ligier from the start having inherited pole from the No.47 KCMG Oreca, which was sent to the back of the class after an incident in qualifying. Nicolas Lapierre stormed back to second over the opening half an hour, and teammate Richard Bradley kept up his fine work by charging to the front at the end of the first hour.

The lead of the class flip-flopped between the two cars, and their battle remained finely poised at the halfway point.

Bird took control in the final stint, however, keeping clear of the charging Lapierre. The KCMG car then received a 30s stop/go penalty for a pitstop infringement.

Darren Turner charged to the front of GTE Pro with a Webber-like move around the outside at the first corner, but his glory was shortlived as the Porsches of Fred Makowieki and Richard Lietz got back in front by lap six.

The No.92 Porsche passed the No.91 for the lead in the middle of hour two, and they were running just 3s apart at the halfway point.

That gap narrowed to just one second as the race entered its final hour, and the victory was only decided in favour of the No.91 in the final stint.

The final place on the podium changed hands between the AF Corse Ferraris when the No.51 car of Gianmaria Bruni and Toni Vilander suffered a problem with its door, that required replacing.

A lengthy pitstop dropped it to the foot of the class, behind the trio of Aston Martins, and promoted the No.71 sister car of Davide Rigon/James Calado to the bottom step of the podium.

The No.77 Dempsey Porsche of Patrick Long/Marco Seefried/Patrick Dempsey led GTE Am for much of the race, aided by a stunning first stint from Long when he mixed it with the frontrunning Pros.

But in the final reckoning the SMP-run Ferrari grabbed the win with Victor Shayter/Andrea Bertolini/Aleksey Basov, ahead of the Proton Porsche of Earl Bamber/Khaled Al Qubaisi/Christian Ried.