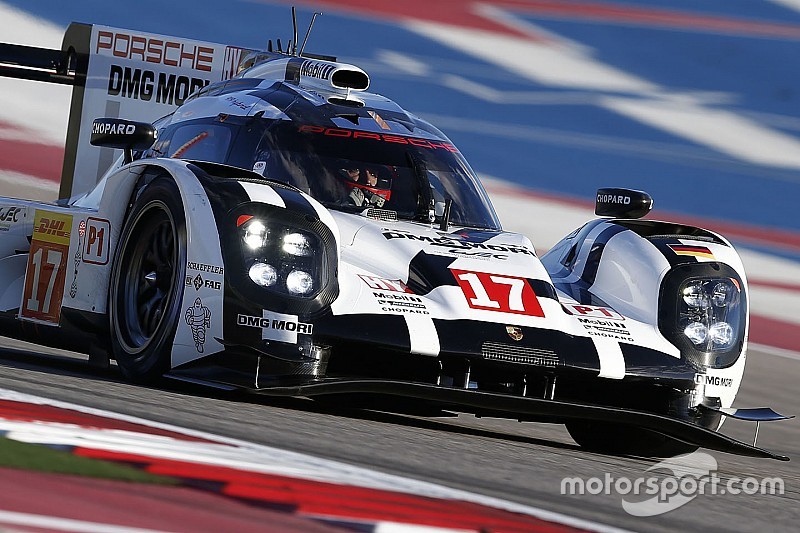 The factory Porsche 919 Hybrids are holding a 1-2 formation after three hours of the Lone Star Le Mans event at Austin’s Circuit of the Americas.

The No.17 car of Mark Webber/Brendon Hartley/Timo Bernhard grabbed the lead at the start of the race from the No.18 sister car of Neel Jani/Marc Lieb/Romain Dumas.

The only drama for the leader struck as Webber overshot his pit stall at the end of the third hour, which slashed his advantage to 8s as he was pushed back to the box.

Audi remained in touch, especially with its No.8 entry of Lucas di Grassi/Oliver Jarvis/Loic Duval, while Toyota struggled as expected and was a distant fifth – with the No.2 car crashing out just at halfway.

The story of the race so far

Poleman Jani led teammate Webber to the start, but Webber drove around the outside of him at the first corner. Di Grassi held third, with Sebastien Buemi's Toyota lunging past the second Audi of Andre Lotterer down the inside of Turn 1.

Webber extended a 6s advantage by lap 10, and Brendon Hartley built on that before Webber was back in for a second stint.

The Audis pitted three laps earlier than the Porsches, with the No.8 car staying within 10s of the second placed Porsche.

Anthony Davidson in the No.1 Toyota caught Treluyer in the No.7 Audi in second hour, but the car hit trouble when Davidson missed the pit entry and was forced to cruise back to pits on hybrid power to avoid running out of fuel.

Ed Brown then went off in spectacular style after he lost his brakes at the final corner in his ESM Ligier, causing the race’s first full-course yellow. The car briefly tipped onto two wheels by the sausage kerb on the inside of the apex and he bounced backwards over the gravel trap into the TechPro barrier.

Webber restarted with a 54s lead over Dumas, who was only 6s clear of Jarvis in the lead Audi. Treluyer was a distant fourth, ahead of the first Toyota of Mike Conway in the No.2.

But just as the halfway point was reached, Conway crashed the Toyota into the barriers under acceleration from Turn 11 while attempting to lap a GT car.

Sam Bird led the LMP2 class for G-Drive in his Ligier from the start having inherited pole from the No.47 KCMG Oreca, which was sent to the back of the class after an incident in qualifying.

Nicolas Lapierre stormed back to second over the opening half an hour, and teammate Richard Bradley kept up his fine work by charging to the front at the end of the first hour.

The lead of the class flip-flopped between the two cars, and their battle remained finely poised at the halfway point.

Darren Turner's Aston Martin sliced to the front of LMGTE Pro with a Webber-like move around the outside at the first corner, but his glory was shortlived as the Porsches of Fred Makowieki and Richard Lietz got back in front by lap six.

The No.92 Porsche passed the No.91 for the lead in the middle of hour two, and they were running just 4s apart at the halfway point.

The No.77 Dempsey Porsche of Patrick Long/Marco Seefried/Patrick Dempsey led GTE Am, aided by a stunning first stint from Long when he mixed it with the frontrunning Pros.